How to avoid a crop of psychopathic MPs 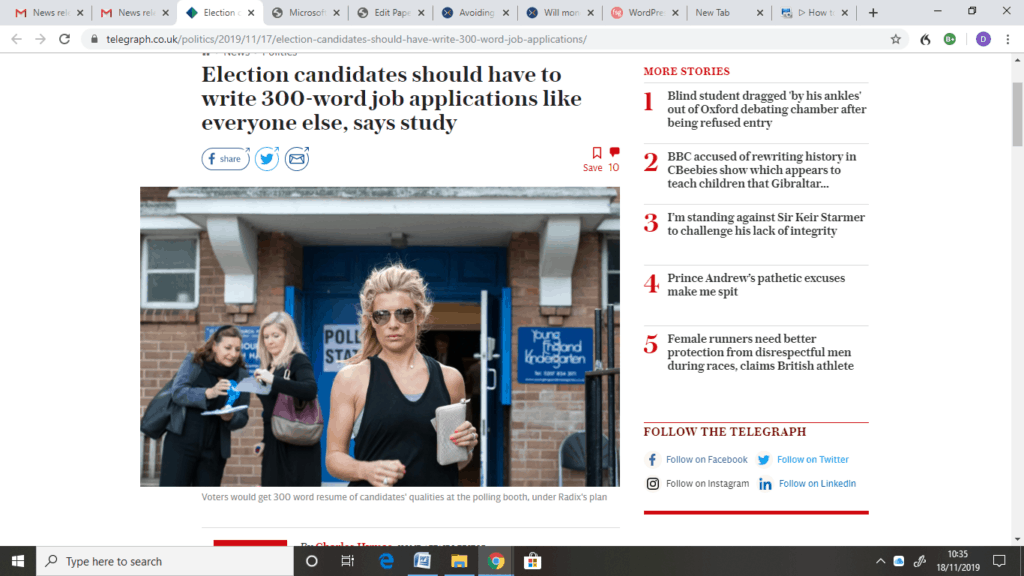 Jon Ronson, in his book The Psychopath Test, suggests that a significant number of our leaders – in business, industry and politics – are psychopathic. To support his argument he reproduces the Hare-PCL-R checklist of the common features of psychopathy. It is worth considering that list in full:

Assuming that we do not wish to be led by psychopaths, it struck us at Radix it would be a good idea to ask ourselves, in contrast, what traits we would like to see in our politicians.

These are, after all, amongst the most important jobs in our country and almost all employers publish a person specification and job description when looking to recruit for a new post, if only to discourage unsuitable candidates from wasting everyone’s time by putting themselves forward. Why we get the wrong politicians.

Unfortunately, this is not the way we appoint MPs. The vetting procedures which political parties use to select candidates are – as Isabel Hardman points out in her book, Why we get the wrong politicians – geared towards winning elections, which is not necessarily anything to do with being an effective MP.

For example, as Hardman points out, parties expect candidates to invest tens of thousands of pounds of their own money in fighting elections. In some circumstances, they may want a candidate who will be particularly acquiescent to the local or national party, which may not be what one is looking for in an effective MP.

In other seats, celebrity, gender, social-economic background or any number of other factors entirely irrelevant to the performance of the role may be prioritised in selection. Yet despite this, in many constituencies the selection as the candidate by the leading political party locally is the real test and the election a mere formality.

Historically, upwards of 500 of the 650 seats might be considered ‘safe’ although as voting patterns have become more volatile over the past decade this may be changing. Despite this, with the current electoral system, the majority of seats will almost certainly remain ‘safe’ for either the Conservative or Labour parties’ representatives.

This is why we have published our report Avoiding the Psychopaths. Have a look and let us know what you think!