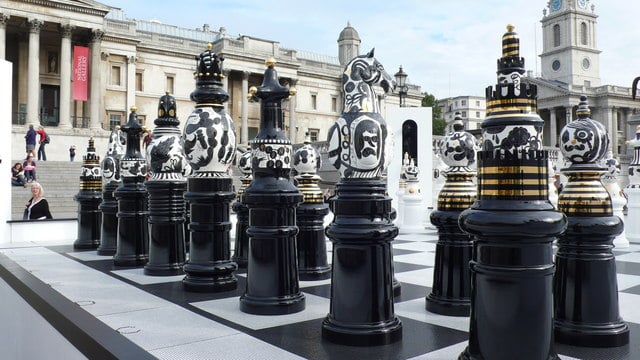 Imagine a game of political chess, not with two players as in a traditional two-party system, but with six. The game is being played out in Berlin, where the world master in chess has finally decided to retire, in 2021, and is only playing occasional moves, whilst popping off to the bar to have some more mineral water and waiting for a more international chess game to appear, maybe in Washington or Brussels – or just writing books about the game and appearing in TV to talk about it.

Her moves as leader of the CDU/CSU alliance (don’t get confused, the CSU is the CDU sister party in Bavaria, which since 1949 has stood alongside the CDU in every election) are increasingly being played by her supposed successor, Annegret Kramp-Karrenbauer, who was elected chair of the party last year and should be the candidate for chancellor in the 2021 election (and logically, with the CDU the biggest party, will invite other chess players to form a coalition with her as Grand Master).

This is a lady whose name is so complex to pronounce that everyone just calls her AKK (not to be confused with men with white, pointy hats in the southern United States – more of those types later). The problem is that, having been a great junior chess player, which saw her beat all-comers in the state of Saarland to become Minister-President in a male dominated oligarchy there, she has turned out to be a much less good player in Berlin.

In a year, she has upset just about everyone, both as chair of the party and as Defence Secretary (in parenthesis, the previous player, Ursula von der Leyen, once also hotly tipped to be the next Chancellor, screwed up as Defence Secretary too and has now decided to play on the big chess board in Brussels, before presumably re-emerging someday probably as non-partisan Federal President, not Chancellor).

AKK may be consigned to the dustbin of history and be replaced by Friedrich Merz, whom she defeated to become party chair, but waits his turn, or the young dynamic Health Minister Jens Spahn. At the annual chess congress of the CDU next year, they will decide who to nominate for the 2021 election. The CDU/CSU only polls 25 per cent of the popular vote.[1]

The other great chess players, the SPD, well, they just can’t find anyone credible to play the game at all. First there was the chap from Brussels, Martin Schulz, but he wasn’t very good at all and lost the federal election game in 2017, so he was replaced by the foghorn-sounding Andrea Nahles, whom no one liked very much after a while, so she resigned.

Then Federal Finance Minister Olaf Scholz said he would lead, but the party doesn’t like the Grand Coalition with the CDU anymore, in which he plays a prominent role (imagine playing chess on the same side as your opponent) and so they recently chose instead as party leaders Norbert Walter-Borjans and his sidekick Saskia Esken, thereby moving their chairs perceptibly to the left.

Their problem is, the current polls show the SPD at just 13 per cent of the popular vote and heading for their worst result in a federal election = so the game isn’t going very well.

Then there is the ever-green, ever-annoying little chess player, the FDP, the Liberals. They have decided to change strategy to become a very Liberal opposition party. But with only 9 per cent of the vote, Christian Lindner is not destined for government any time soon.

Now are you keeping up? Here it gets interesting. We also have Die Linke, the inheritors of the old Communist party; they used to believe in running the chess game as a police state for the good of the workers, but now they are a democratic, maybe populist socialist party. On 8 per cent of the popular vote.

Then there are those patriots with the white, pointy hats – or rather in this case, uniforms, insignias and military-style marches, and “telling it like it is”. No-one likes playing chess with them, they have a habit of kicking you in the shins under the table. The Alternative for Germany, the AFD, who are popularly known as völkisch (a term so German and historic it is hard to translate, sort of ethnic-nationalist; basically anything that isn’t pure German, white and vaguely Christian isn’t welcome). Guess what, they have a new leader too, not exactly another Adolf, but professor of Political Economy Jörg Meuthen will have to do. A frightening 15 per cent of the popular vote in the polls.

Yes, you have seen it, the chess game is awful, and dispiriting. The leading nation in Europe is struggling to host a decent tournament, and none of the players seem to be very good at the game. As for the radical centre – well, find me a decent leader, for starters.

And then there appear people who play the game very differently. They say we need to look at the rules afresh, that climate change and environment needs to play a much greater role in the way we think about this game.

They have two dynamic leaders, who have recently been reaffirmed at their party conference, Robert Habeck with the support of 91 per cent of delegates, Annelena Baerbock (a future chess-master?) with an extraordinary 97 per cent. Habeck and Baerbock, the party chairs of the Greens, are riding high with the Greens at 23 per cent in the opinion polls. And they are just waiting for the outcome of the game in 2021, to see who will come to them to offer a coalition.

And that, dear friends, is where the radical centre must pin its hopes. The unlikely CDU-Green coalition, a mixture of conservative economic policy and radical climate action, speaking to the relatively old and the quite young.

Just in Baden-Württemberg? The chess game in Berlin is nothing if not pragmatic, and there has to be a winner, however many people end up with their hands on the trophy.

Oh, tickets will go on sale shortly for the 2021 Federal election tournament. Only two years to go now – I can’t wait.

[1] All voting intentions and poll numbers based on ARD Deutschlandtrend, 5 December 2019.