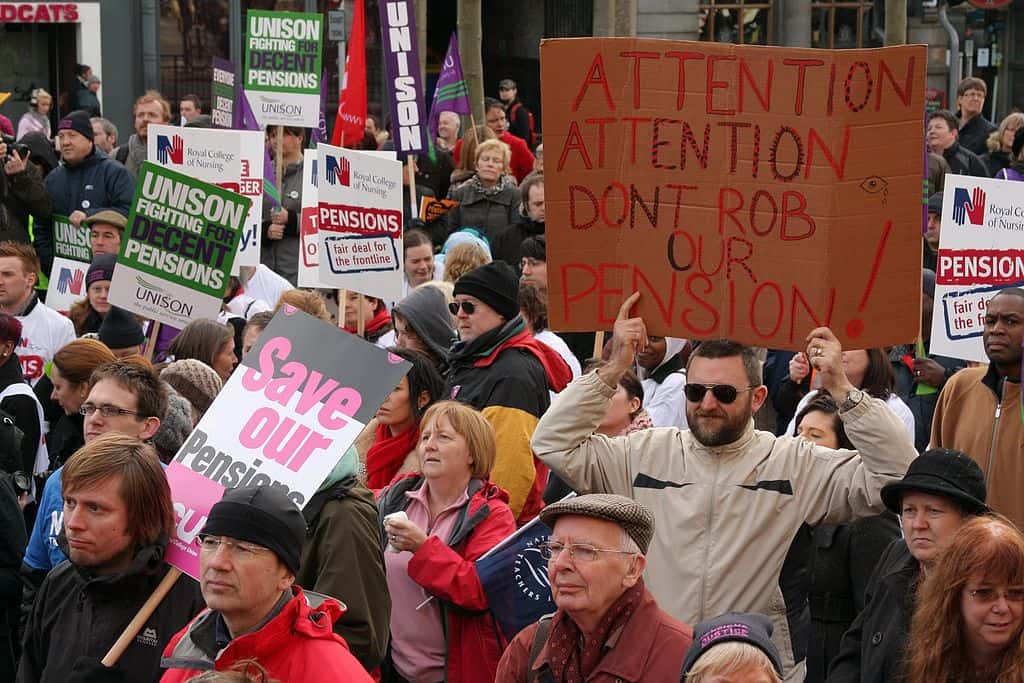 There is currently a debate around whether the government should break the pension triple lock, the commitment to increase pensions in line with the higher of prices inflation, wage inflation or 2.5%.

Historically. the Labour Party and the left were the guardians of pensioners, but more recently many Conservatives and their propagandists in the Daily MailExpress have made protecting the triple lock a sacred cow, reflecting that the readers of the ExpressMail, Conservative voters and Brexit supporters are disproportionally old.

When I was growing up, older people were the generation that had lived through the war, had worked hard rebuilding Britain. No-one would begrudge them enjoying a few years of a pension which they thoroughly deserved, and which society owed them, when they were having trouble feeding themselves and keeping warm.

The idea of the social contract is that if you work hard and are generally a law-abiding, good citizen, society will look after you if you are sick, incapacitated or old.

This is not necessarily a project of the left; the welfare state was in a large part enacted by right-leaning governments – Churchill’s post-war Tories or Bismarck in Germany.

There is a free market version too – you are still a good mensch, this time one who works hard, save for a pension in the capital markets and buy private health insurance. Your pension is invested into the economy which can then support you when you are old; at which time younger/healthier people will have to honour that contract, caring for you, providing you with medical services etc, and there needs to be a government to enforce your property rights through time.

The difference between left and right is over the best delivery mechanism not on the existence of a social contract.

But the zeitgeist is a-changin’. The retirees of today are baby boomers, who worked in an unprecedented time of prosperity, had access to decent housing, pensions and free higher education. Rather than receive a pension for a few years, someone taking early retirement in their mid-50s could receive their pension for 40 years – longer than they worked.

Rather than wisely investing their savings, this generation squandered it chasing short-term returns, not investing in infrastructure for the future, building up high unsustainable debt levels which they used for over-consumption, trashing the environment, leaving a highly indebted unequal and angry society.

This is the anti-immigration, nimby generation that bought us Brexit, rattling around in large houses, whilst younger people are squashed with two kids in a small flat. The younger people who have to support them have a scarcity of housing, have a meagre pension and are saddled with large debts from student fees, mortgage and generally to make ends meet as the cost of living have mounted when their wages have not.

These are the young snowflakes, obsessed with identity politics to the bewilderment of older people.

We are entering a demographic fiscal crisis in this time of inter-generational confrontation. As the population ages, an increasing proportion of people are above retirement age compared to working people who have to support them (the support ratio).

The pensions issue is well-documented and could be solved – even if politicians are not willing to do so – by having a flexible retirement age which increases with life expectancy. However, the demographic-induced health and care costs is much more difficult.

Healthcare expenditure on people over 80 costs between four and eight times more on healthcare than people below 50. Demographic projections show a slow but gradual population ageing and worsening of the support ratio. In contrast, the number of very old people increases much more rapidly.

Now there are approximately 1.7 million people aged 85 years and over, By 2045, this is projected to have nearly doubled to 3.1 million.

To improve well-being and reduce costs, we generally rely on technology to provide efficiency gains, but in the case of medicine this does not happen. Medical advances allow us to keep people alive a lot longer and older people are given treatment that they would not have been offered to them a few years ago.

This is of course a good thing, but it means that technology causes the cost of medical care to increase not decrease.

A lot of political debate is about the poor efficiency and value-for-money of the NHS. But any improvements in efficiency is chicken-feed compared to the massive increase in medical costs that are coming down the line.

Tinkering with the pension age and triple lock will not solve our problems, as our problems are orders of magnitude worse.

The social contract is breaking down – citizens working and being law-abiding is not resulting in a society which will be able to look after you when you are sick, incapacitated and pay an income when you are old.

A major causal factor is that older people who are generally in charge of the assets – broadly defined as financial, political and social assets. This control has not translated into giving younger people the means with which they need to support society, or also a belief in a better future to motivate them because we have under-invested in infrastructure, long-term assets and housing.

Nimbyism has actively blocked development of housing and infrastructure and blocked immigration meaning that the domestic labour force is even more strained. Underinvestment in left-behind areas, environment and society in general has led to social fracture and a bleak outlook.

The key missing element in the social contract requires more investment in the young and the future – and that means sacrifice from older people, maybe sacrificing short-term investment returns to invest in infrastructure, allowing the building of more housing or wind-turbines, even if it spoils the view, paying higher tax to pay for better education, welcoming immigration, and working longer instead of receiving a pension. In return older people will have a better life than their forebears – longer, happier and healthier.

In conclusion, we need to re-negotiate the social contract to one which works for the needs of working and old people suitable for the modern world.

What would this look like? The social contract is not a legal contract, but an implicit idea, but even so I think it’s worth attempting to spell it out, as it will then guide the priorities of society.

So here goes, and I welcome alternative suggestions from readers.

Citizens need to contribute to the wellbeing of society, through work, their investments and non-work activities. In return society will provide sufficient means – education, housing, child care – for them to contribute to societal well-being, whilst protecting citizens from risks they cannot manage themselves and ensure everyone lives in dignity in a healthy environment and flourishing society.

Furthermore, it needs to be a smart contract, one that is flexible and can change as increasing speed of change becomes the norm.

In my next blog I will suggest some practical ideas about how this might come about.