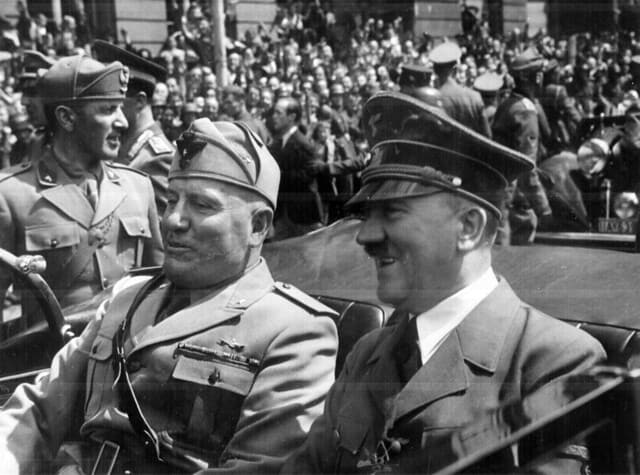 Along  comes a former journalist and editor, a bright, intelligent, energetic individual with a belief in his own destiny to lead his country, dismissive of the “establishment”, a great orator, writer, enthusiast, a charmer of ladies and a chum to men, hated by some, but loved by the many.

It was all just opera. As he prepared to be executed on the orders of his father in law, Count Galeazzo Ciano dismissed the achievements of the by then marginalised Benito Mussolini and his new vision of Italy. But back a hundred years ago, in the divided Italy looking for a new identity after the first world war, inspired by Futurist visions of technology and power, the young journalist and editor Mussolini was a force to be reckoned with as he prepared his March on Rome.

We may remember the shambling figure of 1944 or 1945, the body strung up alongside his lover in a Milan gas station, but the Mussolini of the early 1920s, the godfather of 20th century nationalist-populism, developed a hugely successful nationalist-populist “playbook” which still serves as a guide for the nationalist-populist leaders emerging in countries as far afield as Hungary, Brazil, the US and the United Kingdom.

None of these leaders are dictators in the classic sense, though they may try to exert almost dictatorial powers when given absolute parliamentary majorities, but their political “playbook” owes much to what the first great nationalist-populist leader of 20th century Europe developed and perfected.

Mussolini in 1922 was faced with a fragmented, somewhat invented “nation” in deep crisis. His answer was to ignore much of these issues in substance but to address them in style. In reality the issues that burdened the still relatively new unified Italy in the 1920s were largely intractable (most of the issues that have caused the nationalist-populist democratic revolution in the fragmented UK are likely to prove similarly intractable), and indeed many of them remain unresolved in unhappy Italy to this day.

But Mussolini developed a new type of nationalist-populist politics that diverted attention, founded on several key pillars familiar to observers of national-populism today:

First, create a clear national identity to celebrate, primarily by defining who does not belong to the nation, who is the “other”. This may be by pure ethnicity or place of birth, contribution to the country, perceived affiliation, etc.

In the words of Benedict Anderson, this nation can be an “imagined community” (Mussolini led a nation more or less united by accident, against the wishes of the Piemontese and due to Garibaldi’s intervention in 1861, similarly today’s fragile UK is first and foremost a marriage of convenience forged in 1707 which only gradually assumed any kind of national identity).

Crucially, internationalists and cosmopolitans are the enemy of this form of “invented” nationalism. Foreigners may be tolerated for economic reasons, but they can never really belong. Their children may be more fortunate. Thus Mussolini forged a new “Italian” out of the forced and more or less accidental marriage of northern and southern Italian states which were historically, politically, economically incompatible.

He coined the term “Mare Nostrum” to give Italian legitimacy for controlling the Mediterranean as their “national sea”, even though it was long since dominated by other powers.

Secondly, create manifest, visible expressions of (muscular) action “for the people”. Economic arguments for action or actual value of actions are far less important than their symbolic populist value. Mussolini famously drained swamps and made trains more efficient,  as well as investing in extensive housing projects. He also appeared at a key international conference in Stresa (1935) on a speedboat, to demonstrate his virility and futurist orientation.

Others today build border fences to keep out immigrants or plan high speed train links or to build pointless, expensive bridges. They hold speeches in imperial dining halls and host national festivals. These are highly visible, and popular, actions – and they can prove immensely impressive at an emotional level.

Thirdly, embed one’s power, democratically or otherwise, by diminishing the role of other potential opposing forces in whatever is the national “balance of power”, with a particular focus on limiting an independent judiciary.

Mussolini successfully eliminated all opposition that was overt (though there was plenty that was covert and quickly resurrected after 1943), but always managed to arrange himself with the King and the Pope to preserve the semblance of legitimacy.

Fourthly, focus on control of the media message. This means both being very slick, focused and professional in managing one’s own message, but also finding ways of undermining, and where possible, eliminating opposing media voices. Speeches by other ministers and civil servants are carefully scripted, key words continuously repeated “on message”, other vocabulary banned.

Fifthly, a cabinet or government is less popular than a personal leader, so the personality of the leader is important. The leader must be seen as muscular, action-oriented, intelligent but not intellectual (intellectuals are never popular), a man of the people. The leader understands that the heart always rules the head, so being emotionally engaging is vital. The substance of the message, its technical veracity or otherwise is not especially relevant, but the style and vocabulary of delivery is paramount.

All just opera, Count Ciano? Well, we may chortle at the grandiose military parades and ridiculously bemeddled generals of Italian newsreels of the 20s and 30s. Watching the nationalist-populist leaders of today producing nationalist propaganda events, choreographed media appearances, national festivals, grandiose building projects, we might think it resembles opera.

But reflect on the fact that Mussolini was for a time highly regarded as a leader and ruled for 21 years. Reflect on the fact Franco died in his bed and in power. Had Mussolini not foolishly entered and lost the Second World War, might not an anti-Communist West have tolerated the old Fascist in Italy, as they did the Fascist in Spain? Might Mussolini not have continued another 10 or 20 years in power in Rome, perhaps with a toned-down right-wing rhetoric?

As for today’s nationalist-populist leaders, there seems little chance of the democratically elected Orban or Erdogan losing power in the near future. Trump is likely to be re-elected. And Johnson, if I was a betting man, I would bet on another 10-15 years….