This essentially is the advert sent to businesses and investors around the world by Sir David McMurtry – who while not a household name is probably Britain’s foremost engineering entrepreneur. Renishaw, the company McMurtry has put up for sale, is a world leader in the niche business of measuring instruments of which the 81-year-old is chairman, co-founder and main shareholder.

With most potential candidates to buy the company – regarded as a model for UK manufacturing and technology –based in the USA, Germany or Japan, discussions over a sale will test the government’s willingness to use new powers to block overseas acquisitions of key industrial players. They may also reveal how strategically important the government believes advanced manufacturing is for the UK’s economic future.

The company – based near Bristol with a stock market value of £4.7bn – has most of its 4,400 employees and manufacturing in the UK but generates more than 90 per cent of its sales outside Britain. It is a leading developer of key technologies including sensors, precision metals cutting and 3D printing, and has a long record of hiring and promoting young people.

Apart from the family-controlled excavator manufacturer JCB, Renishaw is the only large UK-based manufacturer with a globally significant position to have been established since the second world war. The company has been a sponsor of Made Here Now for most of the time since its inception in 2014 as a project to highlight opportunities for young people in manufacturing.

News of the planned sale – announced on March 2 – has surprised many in the engineering industry. They had expected McMurtry and John Deer, his co-founder who also owns a big stake but has stayed in the background, to find a way to put their shares into a charitable or family-controlled trust.

In this way, they could have hoped to shield the company from control by a larger business that might have changed its innovation-centred culture. However, time has seemingly crept up on the octogenarian duo, who have apparently decided now is the time to sell, possibly to gain a cash windfall for their families.

Renishaw has invested heavily in precision machining and does most of its manufacturing in the UK. Over the past 20 years, McMurtry has had “more than a dozen serious proposals” to buy the company and has turned them all down, according to a leading banker who is close to Renishaw. McMurtry had – until well into his 70s – insisted he wanted to remain in control to indulge his twin passions of devising new ideas and, in his words, “pushing and cajoling” others in the company to do the same.

Born near Dublin, McMurtry is a prolific inventor, with more than 200 patents to his name. His most far-reaching creation was a “touch-trigger” probe that he devised while working at the aero-engine manufacturer Rolls-Royce. It was this device that McMurtry and Deer set out to commercialise when they started Renishaw in 1973.

The probe and derivatives of it – invaluable for the highly accurate measurement of tools and components in a range of production industries –have driven the growth of the company. McMurtry has also overseen forays into other industries, such as healthcare and dentistry, with the help of innovations in other measurement-related technologies.

The banker with close knowledge of Renishaw – who is involved with discussions over the planned sale – says evaluating what will happen is hard. “It’s a conundrum,” he says. “While a lot of people are interested in Renishaw, in most cases there is a strong reason why they might be ruled out or choose to step away.”

Behind this is the strong possibility that any planned sale to a non-UK entity will be scrutinised by the government, a result of new interest by ministers in ensuring Britain keeps control of key technologies where it has a competitive advantage.

Another element is that an acquisition will go through only if it meets conditions set by McMurtry and Deer.

McMurtry and Deer, who is 83, have controlled the company since the start – even though the pair listed the business on the London stock exchange in 1984. McMurtry (with a 36 per cent stake) has been the driving force. For almost all its history – until 2018 when he handed over to the much younger Will Lee – McMurtry has been both chairman and chief executive. Deer, the deputy chairman, with a 17 per cent shareholding, has let McMurtry speak for both. In the latest move they have signalled their intention to sell – through UBS, the company’s broker – their combined 53 per cent stake, probably in a single block.

McMurtry has cultivated the image of a maverick outsider. Despite the company’s decision to float on the stock exchange (a move he has since said he regrets), he has voiced disdain for the buy/sell culture of the City of London.

He has generally refused to meet bankers and stock market analysts unless they made the journey to leafy Wotton-under-Edge where the company is based. The HQ is in a converted mill set in parkland where – until a few years ago when they became too numerous and had to be removed – peacocks roamed.

In an interview with me in 2011, McMurtry said Britain should turn away from the “hype” of financial services. In his reckoning, the UK had placed too much faith in finance to power the economy and had paid the price in low growth and productivity. “The gloss has worn off the City,” he said. “They [bankers and others in financial services] have made a mess of the country.”

Instead, he has advocated a “reorientation” of the economy around advanced engineering industries. He said in 2011: “We now have the best chance in 50 years to make sure the economy is based around activities that produce real value, rather than trade in perturbations [of share prices].”

As to the future, thanks to a post-Brexit feeling in government that the UK should keep home-grown technology under closer control, politicians are expected to be more interested in what happens to Renishaw than they were in comparable cases a few years ago. Many onlookers think ministers would examine any takeover by a non-UK entity under the provisions of the new National Security and Investment Bill, which is due to become law this year.

Renishaw’s business area of measuring systems for machining could be construed as being an example of “dual use” military/civilian technology covered by the bill, says Jon Moulton, a veteran venture capitalist with a wide knowledge of UK industry. He says: “Renishaw is a leader in a wide range of sexy technologies – including encoders (sensors) and precision machining. It’s easy to imagine that the government…. might not be happy to see control passing to a non-UK owner.”

According to this thinking, the likelihood that the government will inspect any sale rigorously – and possibly impose constraints that could limit the freedom of a buyer to run the business – might dissuade at least some potential purchaser from pursuing a bid.

On top of any conditions that the government might seek to impose, a buyer would have to satisfy McMurtry and Deer that it meets the terms set out in the sale announcement. This said the company “intends to seek a buyer who will respect the unique heritage and culture of the business, its commitment to the local communities in which its operations are based, and who will enable the company to continue to prosper in the long-term”.

The lack of clarity in this statement effectively gives McMurtry and Deer the right to decide what happens to the business and might limit the number of suitors willing to pursue a serious offer.

A third potential stumbling block is Renishaw’s current valuation following a near-doubling in the share price during the year to the end of March. Observers think this might put off some potential bidders, especially private equity buyers. Moulton, for one, says Renishaw is overvalued with a share price “heading towards bonkers”.

However an experienced engineering analyst disagrees. “The Renishaw share price looks fair. The company’s expertise in measurement and controls is going to be highly valuable as more of global industry digitises and as accurate measurement of where things are – and controlling what you do with them – becomes more important. Renishaw has substantial growth potential.”

This comment underlines the attractions of Renishaw to many would-be purchasers. McMurtry will be hoping that the business into which he has, over almost half a century, put so much of his time and ideas will attract a long queue of interested parties. Both he and his partner Deer will not wish the “For Sale” sign to hang over it for too long. 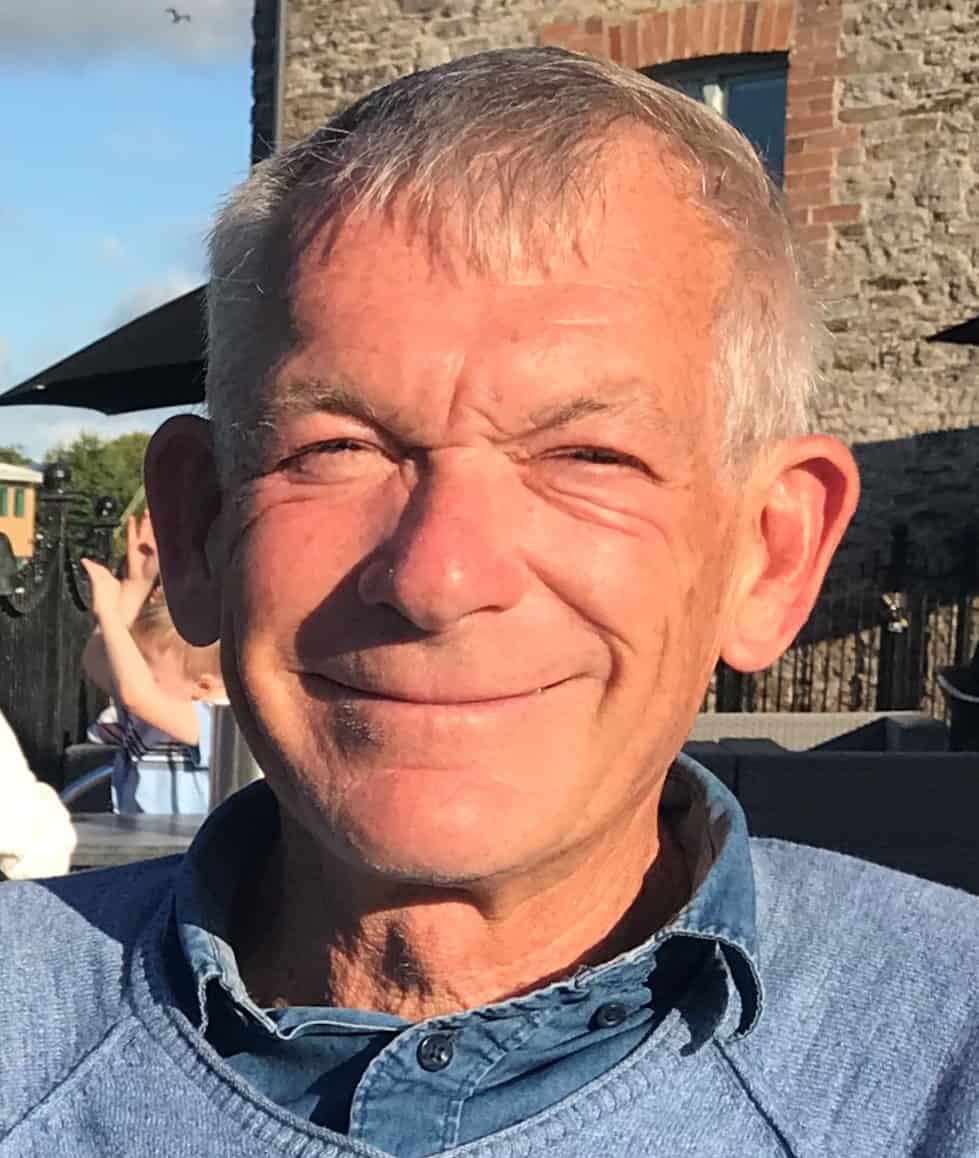 Peter Marsh is a writer and lecturer on 21st century manufacturing. In recent years, Peter has given talks on new opportunities in manufacturing in 16 countries including China, South Korea, Italy, the US, Germany, Qatar, Lithuania, South Africa, Turkey and Brazil.  His best known book is The New Industrial Revolution: Consumers, Globalization and the End of Mass Production, published by Yale University Press. In the past 30 years he has visited about 3,000 factories in 30 countries. He is the founder of Made Here Now, a website on UK manufacturing aimed at increasing the number of young people considering technology and production as a career.