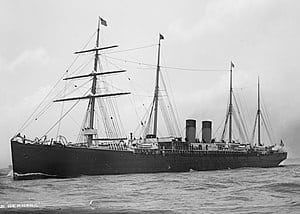 I remember meeting my cousin Courtney Boyle, who I am called after, only once – when I was eight years old. He was generous enough to leave my family a sum of money when he died a year later, and it was only when I was grown up that I discovered where it had come from.

He had won the VC in 1915 as commander of the submarine E14, the first allied warship to make it down the Dardanelles and into the Sea of Marmora and to get back again. In those days, submarine captains and crew won prize money for sinking warships, just as they did for capturing them in Nelson’s day.

The money was related to the tonnage of the sunken ship, so when he sank the troopship Gul Djemal, the Admiralty was clearly less than keen to pay out. So on behalf of his crew, Courtney took them to the high court. They finally paid out on his third attempt.

I worried about that because I knew that the money that came as a reward for drowning 6,000 Turkish soldiers had been used to house me and educate me as a child.

In fact, as I discovered when I came to research my book about Courtney and E14, the Gul Djemal was hit by a torpedo but managed to limp into port. By the time the E14 crew was in court, the ship was ironically under charter to the British Admiralty to take Russian prisoners of war home from Germany via the Black Sea. But that is hardly relevant to the point I’m making here (you can read more about the strange story of the Gul Djemal – formerly the White Star liner Germanic, pride of the Atlantic route – in my book Unheard, Unseen).

No, the point I am trying to make is relevant to the current plight of Prime Minister Johnson. It is that many of us may feel some kind of psychic connection with the sins of the past, as I feared I had with Courtney’s prize money. But that is quite different to being held actually or legally responsible in some way.

This is precisely the fear the people have about political correctness: that, at some point, they or their children will be held personally responsible for slavery (as British) or rape (as a man) – simply because they are white British males. I have two boys who are both of them highly enlightened types – yet my fear is that they will carry these weights throughout their adult lives. Psychically, they may carry some guilt – but that is something we must all find ways of dealing with; legally, they were born centuries later.

Support for Boris Johnson has been strong, among all classes, primarily because he stood firmly against this kind of blameless politically correct blame. Then suddenly, in stark contrast, we hear him smearing the leader of the opposition with some kind of link to the Jimmy Savile scandal at the BBC, for failing to prosecute him for paedophilia when Starmer was director of public prosecutions.

Now there are some categories of politically correct accusations that are so serious that just accusing someone i enough to destroy their career and life – and paedophilia is one of these (presumably that is why it figures so high in right-wing conspiracy theories).

Of course, Savile is in many ways a symbolic person to take the blame – I sometimes wonder whether the entire youth broadcasting industry in the 1970s was devoted to the subversion of young people.

That is why I am not surprised that Johnson has lost so many members of staff by his failure to apologise. Because his remarks seemed to cut across the whole purpose of his premiership.

Yes, there is a brutal tradition of Conservative leadership seeking to destroy their opponents in exactly this way. As a Liberal, I can’t forget how the Conservative establishment hurried to destroy the reputation of Nick Clegg during the brief ‘Cleggmania’ period of the 2010 election. My stepbrother was at the same Cambridge college at the same time as Clegg, and national reporters for the Telegraph and Mail  were besieging his phone.

So when Chris Patten says that the Tory party that he joined no longer exists, I am not so sure he is right. Conservatives have never had much compunction destroying people’s reputations if they seemed a threat to them. But not now…

What makes this different is that the cancelling of innocent people is now a central issue for many people – so it was a shock to find Boris dealing the dirt with the worst of them. That is why I no longer expect him to survive in post this year.