Is France shooting itself in the foot? 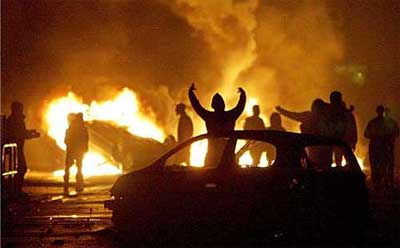 In the space of three weeks, France has given the world two quite different views of its famous Arc de Triomphe.

On November 11, in front of an audience of seventy foreign leaders, the President of the Republic praised multilateralism for solving global problems and disputes between nations.

On December 1, this symbolic monument of the glories and misfortunes of France reappeared in the world. It was suffused with the smoke of tear gas and fires; echoing the incoherent cries of yellow vests and vandals.

Such a waste! How many worried text messages have we received last weekend from the outside, sent by foreign friends who still love France – its civilization, language, history – but who are sorry for its constant plummet.

Our country has no equal when it comes to shooting itself in the foot. She is no longer prominent in the world except through the damaging images of strikes, attacks, riots. Formerly, it still shone, through its culture, but also its industrial successes, its Concorde, its TGV, its nuclear power.

Thirty years ago, we gave up Colbertism to adopt Anglo-Saxon liberalism and the financialisation of our economy. Unfortunately, both SMEs in our industrial fabric and our population were utterly unprepared for the change.

Plunging our forces of production into the globalised economy, without first making sure they could be competitive, has proven to be a disaster. Deindustrialisation and mass unemployment have invaded small provincial towns. Yellow vests are the offspring.

France’s problem – and its current disarray – is that it has taken the opposite path of its competitors. It became more and more socialist, while its trading partners were less and less so. It is not a very easy position to be practically the last socialist country on the planet!

French socialism has history. It started with Giscard (unemployment compensation at 90 per cent, prior authorisation of dismissal, APL, etc.), then worsened considerably with Mitterrand, Jospin and Holland. Right-wing governments are just interludes where, for fear of street protests, they dare not touch the system – a system we finance through ever greater debt.

Macron is right when he says that this cannot last forever. Yet these statements are immediately treated as being insolent.

The outside world remains puzzled by the contradictions of the French – always demanding more services from the state, but screaming as soon as it comes to financing them.

In America, Asia, and most other European countries, citizens have realized that purchasing power is not something that can be increased with a magic wand. That it is first of all necessary to produce more wealth. This is a fundamental point that seems to escape many of our compatriots.

The yellow vests reproach Macron for having removed (in part) the wealth tax. Foreign countries have trouble understanding this issue, because they all have all gotten rid of this imbecile tax which scares off productive investments.

In France, the wealth tax could yield some 7 billion a year. But, by making rich families flee, it generated a tax loss of more than 30 billion in conventional taxes that these families would have continued to pay in France.

In Anglo-Saxon and Asian culture, tax is a means of financing public expenditure, not a way of punishing the rich. In France, the rich are the enemy. In Paris, we are vandalising beautiful cars because we are envious. In London or New York, they are admired and not touched because it is hoped that one (or one’s children) will one day be able to own one.

The sad reality is that there is no longer a single country in the world that admires egalitarianism in the French way. Because hexagonal socialism does not even work well on its own terms. The French have the highest taxes in the world, but they constantly complain about the mediocrity of the services they receive in return.

In other countries, one does not do not confuse the people with the mob, the demos with the okhlos. The yellow vests wish to express themselves? Why do they not use the path of democracy? Why do they not present candidates for the European elections so that we can finally see their political programme…and their results.

Foreign correspondents in Paris are speechless in front of these 24-hour TVs and French radios providing “information” which has treated Macron to the rule of the three Ls: first I lick, then I let go, finally I lynch.

They rightly think that, if Macron perhaps did not deserve the excessive adulation in May 2017, he certainly does not deserve the indignity with which he is now overwhelmed.