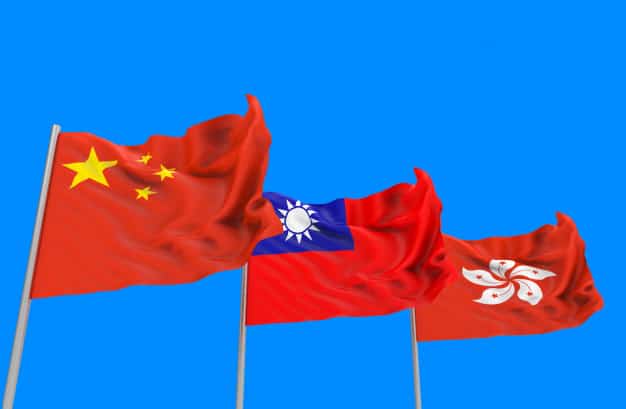 To celebrate the seventy-second anniversary of its rise to power in Beijing with great fanfare, the Chinese communist regime sent some 40 military aircraft into Taiwan’s defence air zone on 1 and 2 October, without identifying themselves. This was a well-calculated intimidation, as the Chinese aircraft did not violate Taiwanese airspace per se. But it provoked outrage from the democratic government in Taipei, which condemned “an aggressive military move, endangering peace in the region”.

The return of Formosa to the fold of the mother country after 72 years of separation has become Chinese President Xi Jinping’s top political imperative, the legacy of his long rule that he would like to leave to his country.

This will not be easy to achieve, as the majority of Taiwan’s 23 million people aspire to live in a sovereign and free country. They were appalled that the Chinese Communist Party had violated the spirit of the Hong Kong handover treaty, which was based on the principle of “one country, two systems”. Since Beijing imposed a national security law in June 2020, there has been no freedom of expression in the former British colony.

In January 2020, Tsai Ing-wen, Taiwan’s president, was re-elected by a landslide, with strong support from the youth. She severely defeated the nationalist Kuomintang party, which Beijing uses as a fifth column to bring about Taiwan’s voluntary return to Beijing’s command.

Underneath Ms Tsai’s frail and smiling appearance lies an iron will. She advocates international sovereignty and complete freedom for her island. She is cautious about proclaiming formal independence for the country, which would be seen as a provocation by Beijing.

But if the Communist Chinese were to attempt to invade her large mountainous island, she would order armed resistance. The Taiwanese have the naval and air military means to hold out for a week or two, until the much-needed arrival of American reinforcements. To justify its military manoeuvres around Taiwan, Communist China often invokes “collusion” between Americans and Taiwanese. Since 1979, Washington is supposed to recognise only one China, with Beijing as its capital.

Communist China’s strategic objective is to empty Asia of any American military presence, from the Bay of Bengal to the island of Hawaii in the middle of the Pacific. The Chinese have never had the ambition to conquer the whole world. They simply want to be seen as the undisputed masters of Asia. They already are economically, they want to become so politically. But they made the mistake of coming out of the woodwork too early.

Until the 2008 Beijing Olympics, which were admired by the whole world, the Chinese had played it very smart. They presented themselves modestly as an underdeveloped nation, with no great political ambition, no historical rancour, that just needed to get out of poverty, that had embraced the market economy, and that wanted nothing more than to join the global market regulated by the West.

The West, touched by such concern, let China plunder its technology. After all, what was wrong with China becoming the ‘workshop of the world’? For their part, the other Indo-Pacific countries, fascinated by China’s economic success, increased their trade with China exponentially, unreasonably increasing their economic dependence on it. The Australians had become China’s best friend.

But China did not have the patience to pursue this strategy quietly, which would have gradually brought the whole of Asia into its fold. In order to rally the population around itself, the Chinese Communist Party decided to play the nationalist card.

It organised high-profile naval expeditions in the East China Sea, around uninhabited islands administered by Japan since 1895 but claimed by Beijing, and in 2010 refused an American offer of mediation on the subject. It seized reefs in the South China Sea, built military airfields there, and claimed a maritime area larger than the Mediterranean.

In 2016, it arrogantly refused to respect the decision of the Permanent Court of Arbitration in The Hague, where the issue had been referred by the Philippines.

Faced with this expansionism, all the countries of the Indo-Pacific took fright. They asked the Americans to maintain their military presence. Australia even signed a new strategic treaty with them – and with the British – the AUKUS.
Curiously, Xi Jinping’s China has forgotten that in Asia, arrogance has always been detrimental to power.