How to keep carbon pricing out of the lobbying ‘ditch’ 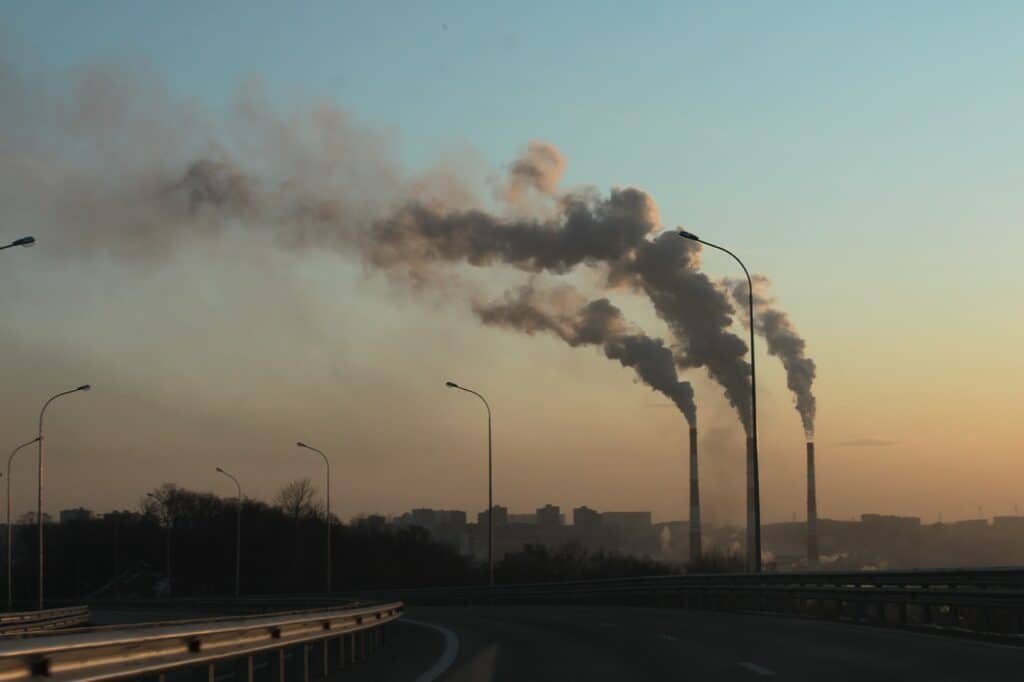 Lobbying isn’t limited to what goes on in parliament and we need to focus on two critical parts of the UK’s carbon pricing regime both of which are likely to be heavy on industrial lobbying and light on views from civil society.

First there is the review of the cap on the UK’s Emissions Trading System (‘ETS’) – which we must ensure does a better job of reducing emissions than its European predecessor, and takes account of the excess stock of permits to pollute that that has already been created in the UK scheme.

And for our domestic carbon pricing really to be effective, the UK must also step up its efforts to introduce a Border Carbon Adjustment Mechanism which would place tariffs on emissions ‘embedded’ in certain classes of imports.

High energy prices and the recent set of policy documents ahead of COP have kept carbon pricing in the news – if not quite up there with Boris’s self-confessed lobbying errors (“On a clear road I crashed the car into a ditch”).

To date the UK, has made better choices here than many other countries.

Its mixed regime has been more effective than most in decarbonising some elements of the economy – notably power generation.  Its very complexity has helped it avoid the political opposition to carbon pricing that we have seen in France for  example.  And the academic consensus is that it has had minimal impact on the competitiveness of UK industry – though this is mainly because it has largely exempted the most trade exposed industries.

The downside of our complex carbon pricing regime  is its vulnerability to lobbying by industrial players for whom decarbonisation is likely to be difficult or financially painful. Removing Owen Paterson is obviously not going to change this.

The EU’s own Emissions Trading System famously demonstrates the lobbying risk. The average price between 2009 and 2018 for emitting a tonne of carbon was less than €10. Very broadly, when the EU ETS was set up, the voice of industrial lobbyists urging the dangers of too harsh a regime outweighed those of environmentalists focussing on the opposite danger.  The majority of submissions to public consultations on the ETS have consistently  been from business interests.

One resulting long term problem of the EU ETS has been that too many permits were issued.  As permits to emit carbon under the EU ETS and the new UK version of the same scheme have no ‘use by’ date – the buyer has acquired the right to emit one tonne of CO2 and can do this at any time–prudent operators acquired large balances of permits to cover their emissions for many years ahead.

There has therefore been a large overhang of permits in the EU ETS which has depressed the price and the effectiveness of the tool and this is only just being dealt with.

Secondly, far too many permits were issued free to businesses which were able to argue that they were potentially exposed to international competition.  The level of these free allocations would have mattered less if the overall price in the market had been higher (as even firms receiving them for free would have been incentivised to sell the permits at profit and to decarbonise) but with the overall oversupply and very low pricing this did not happen.

While we were in Europe, the EU ETS was part of the UK’s carbon pricing armoury, albeit one of the components which worked less well.   The UK implemented its own ETS this year following the exit from the EU.  Like the EU scheme it covers large industrial installations, substantially all power generators, and flights within the EU – together around one third of the UK’s emissions.

The first iteration of the scheme has some of the familiar problems. While not quite on the EU scale, too many permits are being issued in the initial years.  The overall cap on the UK ETS allows the sectors it covers to generate an average of 150m tonnes of CO2 equivalents in each of its first three years (2021-2023 before revised limits are likely to be brought in at the beginning of 2024) compared to 129m tonnes of CO2 equivalents that were actually emitted by these sectors in 2019.

Yes – that’s correct – the cap that is supposed to be reducing emissions for this part of our economy is set substantially higher than the actual level of emissions two years ago. With emissions needing to come down to meet the UK’s carbon budgets (by 2023 the Climate Change Committee states that these sectors should only be emitting 108m tonnes of CO2 equivalents each year), we are already legislating for 100m tonnes of CO2 emissions from these sectors that are in excess of our national targets.

In addition to this over supply of total permits, existing arrangements from the EU for free permits have been replicated more or less exactly.

It is important that informed civil society keeps a close watch when the government conducts its forthcoming review of the cap on permits in the scheme.   Will the government adopt the Climate Change Committee’s recommendation as to how quickly permits/allowances should be reduced?

How will it deal with clawing back the initial over supply of allowances?

Does it make any changes to the level of free allowances and the rules governing their allocation (for example by removing inherited provisions which provide free allowances of 30 per cent of existing emissions even to industries adjudged to face no international competitive threat)?

Will it retain the initial provision for a minimum auction price, and if so, at what level?

Will it extend the scope of the scheme to cover Green House Gas Removals (or other sources of emissions), and if so, how will changes in scope be factored into other parameters?

No doubt there will be extensive, expensively crafted, submissions from industry on all these questions; we have to make sure that these are not the only well-informed voices that are heard.

If we do make this part of our carbon pricing infrastructure bite, we must also return to its potential impact on the international competitiveness of UK industry.

The impact of carbon pricing on competitiveness stems primarily from big differences in nations’ medium term ambitions for emissions reductions.   As such the problem isn’t just limited to carbon pricing.  To the extent that other jurisdictions are not trying to reduce emissions as quickly as the UK is aiming to, this is likely to disadvantage our industries whether we are aiming to reduce emissions through regulation or through pricing.

So the best answer is maximal alignment of overall levels of ambition, alongside some agreement about deploying carbon pricing tools.  COP26 has reminded us that there is only so much progress we are likely to make in this direction.

The next best solution is to build carbon based tariff (or other) walls which enable those countries with higher climate change ambition to implement appropriate domestic pricing measures without their industries being exposed.   The EU has made a major initiative on this front with its Carbon Border Adjustment Mechanism (‘CBAM’) proposals, discussions about which will run long after COP26.

Any CBAM faces a number of challenges – WTO compliance, the potential for retaliation from trading partners, the choice between a very broad scope which introduces a large administrative burden, and a more restricted scope which leaves some parts of economy exposed.

The EU proposal makes a very creditable stab at navigating these difficulties; any CBAM design is going to have to accept some mix of sub-optimal trade-offs, and the EU proposal is no different, but the chosen compromises appear reasonable.

It is very much in the UK’s own national interest to support this proposal and adopt something very similar here. If it co-operates with the EU CBAM plan it will avoid both a significant administrative burden on UK businesses and another layer of intractable issues related to Northern Ireland.

But it is also in the interest of the planet.  The successful implementation of a CBAM would not just help reduce emissions in the EU and the UK.   The expectation is that faced with tariffs on exports to the EU if they continue to allow their own industries to pollute, other countries would increase their carbon prices (which should be offset against the EU tariffs) thus expanding the level of ambition globally.  There is some sign of this already starting to happen with several jurisdictions which trade with the EU taking steps towards more carbon pricing.

The third best way of resolving the competitive problems of carbon pricing – and the approach largely taken to date – is to give up decarbonising trade exposed sectors of the economy other than through difficult and slow international initiatives.

These heavy polluters are given free passes to the ETS (and other pricing measures), and the  decarbonisation of cement, steel and aluminium manufacture does proceed, but much closer to the pace of the slowest international competitors.  Many industrial lobbyists would prefer this ‘third best’ solution, which places minimal pressure on them to reduce emissions; again we need to ensure that their voice is not the only one that is heard.

Boris’s car crash on a clear road gets the media attention.  But for the environment the lobbying rubber really hits the road on the backstreets of the ETS and Carbon Border Adjustments.  We must keep our eye’s on this road rather better than he has.

Keeping carbon pricing out of the lobbying ‘ditch’.

Lobbying isn’t limited to what goes on in parliament and we need to focus on two critical parts of the UK’s carbon pricing regime both of which are likely to be heavy on industrial lobbying and light on views from civil society.

First,there is the review of the cap on the UK’s Emissions Trading System (‘ETS’) – which we must ensure does a better job of reducing emissions than its European predecessor, and takes account of the excess stock of permits to pollute that that has already been created in the UK scheme.

And for our domestic carbon pricing really to be effective, the UK must also step up its efforts to introduce a Border Carbon Adjustment Mechanism which would place tariffs on emissions ‘embedded’ in certain classes of imports.