How to ensure Lebanon’s neutrality 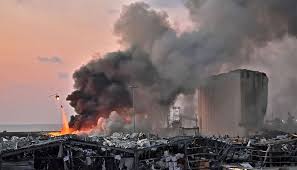 The gigantic explosion which, on Tuesday 4 August, blew up the installations of the port of Beirut and heavily damaged the old Christian quarters, is an additional tragedy for Lebanon, already the victim of a serious political and financial crisis.

For once, this destruction is not due to war. Responsibility for it lies with the negligence of the state. Despite repeated warnings from the port authorities, it neglected to disperse a very large stock of ammonium nitrate (a very common fertilizer that can suddenly turn into an explosive at high temperatures), which arrived by chance six years ago as cargo in a Moldovan freighter that had stopped in Beirut for engine damage and was not allowed to leave for reasons of obsolescence.

This is a tragedy born of the collapse of Lebanese institutions. But France cannot lecture Lebanon. It has experienced its own deadly explosion of ammonium nitrate at home (AZF factory in Toulouse, September 2001), and even, in April 2019, the burning of its national cathedral.

France, on the other hand, has rightly rushed to Lebanon’s aid. It is a state France created in 1920 on the ruins of the Ottoman Empire and at the request of the Christian community, then in the majority. It is a nation whose elites have always spoken French.

It is a country for which General de Gaulle had quarrelled with Israel, imposing a complete arms embargo on Israel after an IDF commando helicopter blew up 14 Lebanese airliners at Beirut airport in December 1968. As the godmother of Lebanon, France has always remained close to it.

Among Arab countries, Qatar was the first to send aid to Beirut. The rich gas emirate had already rebuilt many villages in southern Lebanon that had been destroyed in the summer of 2006 by the 33-day war between Hezbollah and the state of Israel. And the last political-constitutional agreement signed between the Lebanese factions – still in force – was signed in Doha on 21 May 2008.

Lebanon is the only country (along with Israel) to enjoy press freedom in the Middle East and therefore has many friends in the West and in the Arab world. This mountainous territory, the size of two French departments and with a population of 7 million, also benefits from the support of a very rich diaspora of 10 million people, made up of successful families from the Americas, Europe, Africa and the Gulf.

Despite all these good fairies, Lebanon has not managed to re-establish a strong and independent state, as there was at the time of Fouad Chehab’s presidency (1958-1964), when the country was known as the “Switzerland of the Middle East”. Since the Cairo agreements of November 1969 (when under Nasserian pressure, Lebanon was forced to accept armed Palestinian militias in its country), the country’s independence has gradually sunk under the blows of regional powers. It became their proxy battleground during the fifteen-year civil war (1975-1990).

The political system based on sectarian power sharing initially appeared to be a model of justice, balance and tolerance. It gradually became a poison that paralysed the Lebanese state. It could not resist foreign influences: Syrian military presence until 2005, repeated Israeli incursions, militarisation of the Shiite community by Iran (via Hezbollah), Saudi money feeding the Sunni community, and so on.

Inoculated, the Lebanese have managed to avoid being caught up in the Syrian civil war, which has been going on for nine years. They have remained neutral. But Lebanon has still not regained its full sovereignty.

It remains a potential plaything for conflicts outside its borders. Hezbollah’s Shiite militia remain today an instrument in the hands of the leader of the Iranian revolution in its great confrontation with Israel. In order to ensure their survival, Lebanese Christians thought for a while about a strategic alliance with Israel, before renouncing it in 1983.

The search by the Lebanese for security provided by the regional powers (Israel, Egypt, Saudi Arabia, Iran, Turkey) is illusory. Only the major world powers, disinterested in this particular case, can draw up a long-term security plan for Lebanon.

The UN Security Council, which brings them together, could very well adopt a resolution that would make Lebanon an officially neutral country and fix its borders once and for all. But it would have to do so under Chapter VII of the Charter (which authorises, with conditions, the use of force), so as to be able legitimately to stand up to all those who, like the Iranian Pasdaran that aspire to wage a proxy war, would see fit to undermine this neutrality.