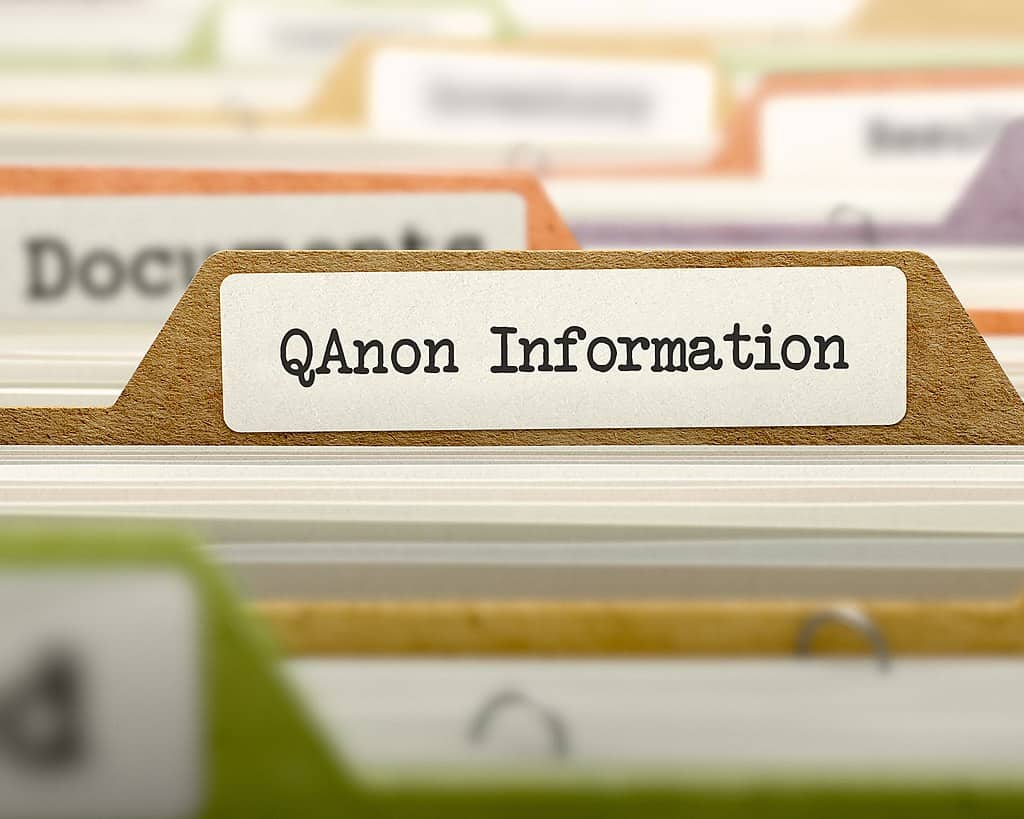 What does a sceptical liberal do about great conspiracy theories like QAnon, the bizarre Republican party idea that Donald Trump is leading resistance to  cabal of satanic paedophiles who have taken over the US government, led by his last presidential opponent Hilary  Clinton?

I agree with Ben Rich last week – both that American politics seems to have descended into an abyss where facts no longer matter, compared to competing narratives, and that Gabriel Gatehouse’s BBC series is absolutely compelling on the subject.

Gatehouse dates the QAnon story to the death of Bill Clinton’s friend Vince Foster in 1993 – who killed himself by the Potomac and became the focus of an amazing series of stories, building on each other, via internet chat rooms into a whole parallel reality. And bizarrely spread partly by our very own Sunday Telegraph.

Now, I know from my past in television how quickly the death of politicians and gather about them the lurid patina of conspiracy. Like the death of the SNP vice chair Willie McRae, who is now widely regarded as having been murdered by the state, when in fact he killed himself (how do I know? I will explain another  day…).

I am not a fan of conspiracy theories – for the reasons I set out before. But that does not make me entirely credulous about every official statement, no matter how many times I am told by the Left to “follow the science”.

In fact, like so many others who became politically aware during the 1970s, I’m not going to dismiss every scare story as nonsense. Because of that, I became a journalist and because of that that I presumably became a card-carrying Liberal at about the same time.

So yes, I am a sceptic, because I remember what happened with drugs like thalidomide. I am sceptical about the safety of 5G to human, animal and plant life – not because I believe it caused covid – but for the same reason I can’t believe that every vaccine is safe for everyone. They won’t kill most people, but there are a few for whom they can be dangerous.

Why? Because I remember the stories that have come and gone since 1980 which showed me that governments and establishments prefer their stories simple – especially when it comes to technological breakthroughs.

So when they vaccinated British troops bound for the first Gulf War in 1991 with a cocktail of different vaccines, there was a significant minority whose immune systems were overloaded – with disastrous effects.

So when a UK researcher discovered the human form of BSE – known by the tabloids as Mad Cow Disease and caused by adding dead cows to cattle feed – he was hounded out of his job by the security services.

This was not really the fault of politicians – which was how agriculture minister John Selwyn Gummer could find himself feeding his daughter a beef burger on live TV to show how safe it was. He was as much a victim of groupthink as everyone else.

That was how those middle class types who invested in Lloyds of London were hung out to dry some years later – because  nobody official had accepted that, for the previous six decades, asbestosis had been killing people (more about this in my book Broke­).

So what should we radical centrists do when you are confronted with so many bizarre tales about vaccines and the real causes of the pandemic.

This is what I think we should do – because a sort of polite scepticism is probably the right stance for most official pronouncements:

Like, for example, the fearless American writer Bari Weiss (I have been listening to her fascinating investigation into the story of Amy Cooper – who lost her job and was driven from her home for calling the police about a black birdwatcher in New York’s Central Park).

Because I don’t believe we have reached the level they have in the USA, where the competing narratives have disconnected themselves so completely from the facts that most people believe some kind of civil war is inevitable. In the UK, we need to avoid this kind of mob rule by clinging to civilised argument, both sceptically and optimistically.

The French philosopher Jacques Ellul used to say that, when you fight anyone, you get like them – and there is a sense that both sides of the American debate are getting increasingly like each other – certainly responsible for each other.

So let us end with what Bari Weiss says, in her review of the year since she resigned from the New York Times:

“Doomsday thinking is pleasing. Among liberals and progressives, I think it comes from a sort of self-indulgence and self-absorption. It makes you feel like the star of the show, struggling to survive under late capitalism, just one election away from the End of Democracy, and probably months from violent civil war. On the right, I think much of this comes from a kind of nihilism, or a justification for sitting back and doing nothing. Falling too deep into American catastrophe porn (let’s say, Libs of TikTok videos) lets you check out and take the blackpill. Liberalism tried and failed. These are the end times. Let’s get the popcorn and watch civilization collapse. But: What if America is actually in pretty good shape? What if we’re not in the last days, on the edge of slaughtering each other? Things always need improving. Suffering needs alleviating. (I wouldn’t be a writer if I didn’t think that.) But what if we took the panic level down a few notches. Maybe that would help make things a little more reasonable. Maybe it’s not DEFCON 1 right now. Maybe it’s more like a 3…”