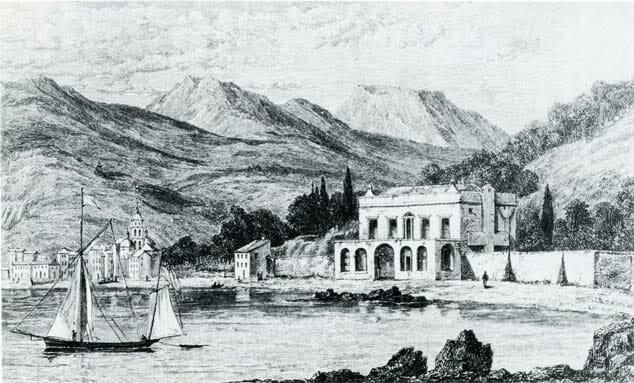 Two hundred years ago Shelley and his companion Edward Williams sailed their boat Ariel out of the Gulf of Spezia towards Livorno and were never seen alive again. It is quite easy to see how they made the mistake of going out when they did. The bays of Lerici and La Spezia are protected from the Ligurian Sea by enclosing headlands and islands. The thunder storms that build up most summer evenings at nine o’clock crackle their lightning around the hills to the north towards Genoa without, more often than not, troubling these havens. In 1822 there were no weather forecasts, other than the opinions of local fisherman, who tend to be canny and quiet when advising foreigners.

Shelley left behind a tangle of love affairs and infant deaths that must have been emotional hell for everyone involved. Byron, who was involved but had a tougher hide, and Leigh Hunt arrived a few weeks later and found the villages where Shelley had been living – San Terenzo and the larger Lerici, ten minutes brisk walk round the bay – delightful. Since then an anthology of writers, mainly British and Italian, have passed through and agreed, with Sem Benelli naming it the Gulf Of The Poets in 1910. D.H. Lawrence, Virginia Woolf, E.M. Forster loved the place and now, thanks to the new Lerici Music Festival (while in no way bracketing myself with them), so do I. This century Lerici Pea Prize has been given to writers who have contributed to the tradition and they have little plaques on the railing of the seaside path between the two villages. Among them is Carol Ann Duffy.

When Leigh Hunt and Byron arrived from Livorno they were, like Shelley, not just coming for summer sun. They had spent months crossing Europe to escape the increasingly autocratic and censorious clutches of a Tory government in London that had been in power too long. Sounds familiar? Shelley had been fulminating against it in pamphlets, to the fury of the Tory press, which seized on his private life to discredit his views. The answer was to start their own periodical, The Liberal, which Leigh Hunt backed and helped publish with his brother. The reason for Shelley sailing to Livorno was to discuss the idea for the journal with them – sailing down the coast was a much quicker way of getting about in the days before railways, when roads were bad and the ways through the hills difficult. Shelley was not on a pleasure cruise. When The Liberal did appear, though, it did not last long: barely a year. Tory money does not flow towards publications that are openly hostile, then as now.

A long time later, in 2004, Ben Ramm revived the title, feeling that the political atmosphere in Britain was ripe for some original thinking not tied to the Labour or Conservative parties. Once the Liberal Democrats allied themselves with the Conservatives in 2010, they found its views inconvenient too and it first dropped its print run, then closed on the Internet in 2012.

I miss it, not only because The Liberal published my poems, but because it provided an opposition to orthodoxy, social and economic. Time it returned, two centuries after its birth on these glorious if rocky, Ligurian shores – and for a longer stint this time. The authoritarian forces across the world are having things too easy at the moment and they need confronting.

Lerici and San Terenzo are coming to life again, not only for tourists and those looking for yacht moorings. A new cultural foundation has been formed, the classical music festival is six years old and happens on the sea front, where any passing child can peep through the curtains and hear Bryn Terfel singing with the local student orchestra. It also uses the villas around the towns – the sort of places that Leigh Hunt (but not Shelley) could afford. The links with literature, London (the Artistic Director, Gianluca Marciano, is also the conductor of the Chelsea Opera Group, the company where Sir Colin Davis started his career) and contemporary intellectuals are being reforged. My week in Lerici has been inspiring, convincing me that it is the poet’s job, with musicians, to make the case for a saner and less judgemental world – not always with polemics but with works that give driving forces other than power and economics the space to take hold.