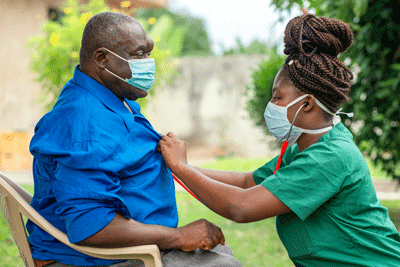 The OECD has calculated that after the bounce back and return to pre-pandemic levels there will be still a lot to sort out. Their estimates are that there will be scarring that is left when countries shake themselves off – not just in relation to high levels of debt that will have been accumulated, and which will need to be addressed somehow, but also because of the distortions created and the misallocation of resources during the pandemic that will need to be unwound.

There have undoubtedly been unequal impact of the epidemic on different parts of society, regions and sectors and that could leave permanent scarring. And that could well be reflected in a lower growth of GDP per annum than would otherwise have been the case . But for the UK it will be worse than for its European counterparts according to the OECD because of Brexit. This will mean, if true, that the UK will have to run faster to catch up than others may have to do.

So what are the chances of moving back to earlier trend growth – and then if possible exceed it. Well, this was the subject of a debate by the thinktank Radix in which I spoke on June 9 (1). A source of optimism is that growth forecasts are all being revised upwards on the back of the successful vaccine rollout, at least in the developed world. The World Bank ,though still urging a note of caution and encouraging advanced nations to delay any reversal of the huge stimulus they have provided during the pandemic, has revised its own forecast for this year for the global economy up to 5.6 per cent, the strongest post recession rebound in 80 years (2).

And the Office for Budget Responsibility (OBR) in its forecast for the UK accompanying the March 3 budget projected growth of 4 per cent for this UK this year. In May the Bank of England, the IMF, the OECD (3) and others now put that growth at around 7 per cent for this year and just over 5 per cent for 2022, recovering finally all the pandemic losses.

But most projections for later years suggest that the economy will find it difficult thereafter to achieving average annual growth higher than 1.5 per cent. One of the reasons is the lack of investment. The OECD projects that over the next couple of years, despite the encouragement given to firms to invest through the 130 per cent but temporary so- called ‘super-deduction’ capital allowance, it will be consumer spending that will lead the recovery, reflecting pent up demand that built up through involuntary savings during the pandemic. Private investment on the other hand is likely to stay subdued and be still below pre-pandemic levels by the end of next year.

If this materialises it will have serious implications for later years. The slowdown in business investment during the austerity years post the financial crisis had a major impact on the economy. The annual rate of productivity growth averaged 2 per cent per annum in the decade before the financial crisis. It then slumped to an average of 0.3 per cent per annum in the decade pre pandemic.

We know that investment and innovation are key to boosting productivity and growth. There may in fact be some hopeful signs here. Recent coverage by The Economist shows as series of big R&D investments announced not only by the large multinational tech firms that did well out of the pandemic, but also in the semi conductors area where demand has grown exponentially as well as by some large consumer retailers that have moved much of what they do online (4).

The journalist Peter Marsh, who has been specialising in industrial trends through his career, argued at that same Radix event that the UK has a comparative advantage in some areas of ‘clever manufacturing’ as he calls it – the type of investment in other words that ‘punches above its weight’ and includes what is being observed in sectors such as biotech, new materials and robotics but also in craft -based metal goods and even textiles.

These are all investments which require management to expertly knit together old and new technologies (5) and luckily there seem to be many examples of where that is happening in the UK. The new emphasis on the green economy also offers many opportunities.

Yet investment in the UK saw a renewed fall in Q1 2021 . Unless that is reversed , even if we manage to get workers back into jobs and achieve full employment again in the next couple of years, the danger is that growth from then on will revert back to trend and possibly even below that. In the Economist leader in early June under the headline ‘Innovation Nations’ hailing the rise in global capital investment intentions that seemed to be happening, the only UK based firm that I could see featuring was M&S and that for its embracing of online sales!

This post first appeared in the blog of the Centre for Brexit Studies.

Vicky Pryce is a Visiting Professor at BCU and a board member of the Centre for Economics and Business Research (CEBR).