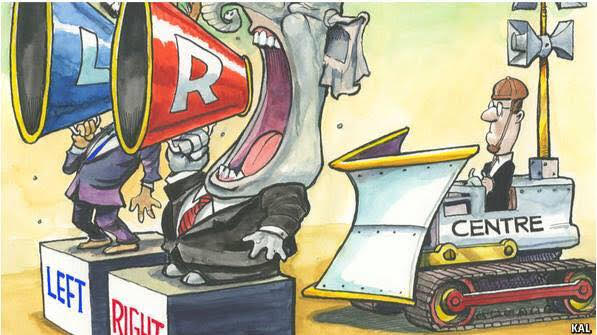 This post first appeared, along with the cartoon, in the Australian Sensible Centre newsletter

The momentous implications of the shutdown strategy imposed on the country by our political class in response to covid-19 are only just beginning to sink in.

Never before has public policy been subject to such dramatic upheaval based on so little evidence with so little public scrutiny and debate.

We opposed the shutdown from the outset. It was a rash and panic-driven decision, taken without public debate and with little caution as to its seen and unforeseen consequences. It didn’t seem, to us, to be sensible. It was the opposite of prudent, conservative public governance.

When our governments imposed the shutdown strategy, they didn’t give a minute’s thought to how or when it would end. If you close the country’s borders and suspend tourism, how do you re-open them without allowing the virus to re-enter the country? A billion dollar bailout of tourism proprietors can only be sustained for so long.

If you stop foreign students from attending Australian universities, when those universities foolishly made themselves dependent on fee-paying students from China, how do you turn the tap back on without allowing the virus to be imported a second time? An $18bn bailout for universities has only rewarded them for their wholesale degradation of their own institutional integrity by chasing dumbed-down, non-native speakers of English as paying customers, but this can only be done so many times.

If you stop interstate air travel in Australia, airlines will go out of business. Due to our weak competition laws, we only have two airlines serving 25m Australians on major city routes when we should have four or five. And of the two operators, one has now gone into voluntary liquidation, even after an $800m temporary assistance package. Qantas is now free to screw consumers as it likes, and the routes that will suffer the most will be those out of regional centres like Alice Springs and Mt Isa.

Did the political class sit down and consider these matters? No. They were seduced, as always, by a computer printout of some ‘modelling’, on this occasion an unpublished, internal departmental memo from Imperial College, London, which wildly mis-forecast likely deaths from covid-19 in the northern hemisphere.

The political class got out their calculators, applied the Imperial College numbers to Australia (never mind our antipodean location and divergent geo-cultural circumstances) and were confronted with a number between 50,000 and 150,000 likely Australian deaths. They panicked.

At the time of writing, the estimated 50,000 to 150,000 fatalities has turned out to be, in fact, 91. No-one has been sacked for this disparity, and no-one will. The cost of getting this so wildly wrong is now something in the order of $720bn from federal and state governments, and a likely trillion dollar debt, but no adviser or head of department or minister will lose their job.

Just a few months ago, the federal government was found guilty of rorting sporting grant allocations involving several hundreds of thousands of dollars. These matters were deemed ‘scandals’. Calls for the resignations of ministers were made. The Sports Minister did resign.

But the trashing of the economy to the tune of $720bn in payments and bailouts in six weeks, a wholesale slaughter of small and family businesses, a cull of one million low-paid, precariously employed jobs in hospitality and tourism, the suspension of education for our kids, a wave of family violence that has yet to be measured, and the imposition of a trillion dollar debt, will not result in a single sacking. No adviser or head of department or minister will lose their job.

But reputations, if not jobs, have been trashed. The reputation of the Liberal National Coalition for prudent financial management has gone, perhaps forever. The remaining vestiges of Labor’s historic representation of the country’s battlers – non-salaried, precariously employed, wage labourers – has gone too, perhaps never to return.

The political class ensured we have neither broad immunity nor a safe way out of shutdown. Our current position is best described as ‘paralysis’ – unable to move forward, unable to move back.

Six weeks ago, the Swedish approach to covid-19 was being vilified by many. There is now an emerging consensus that all countries will end up with something like the Swedish path – it’s just a question of how long they take to transition out of the shutdown phase into a post-shutdown phase. That may take years in some cases.

In essence, the Swedish position, from the outset of covid-19, was that the virus cannot be eradicated. It will run its course. It can be mitigated, and should be managed with care as life goes on.