A second referendum may now be all but inevitable 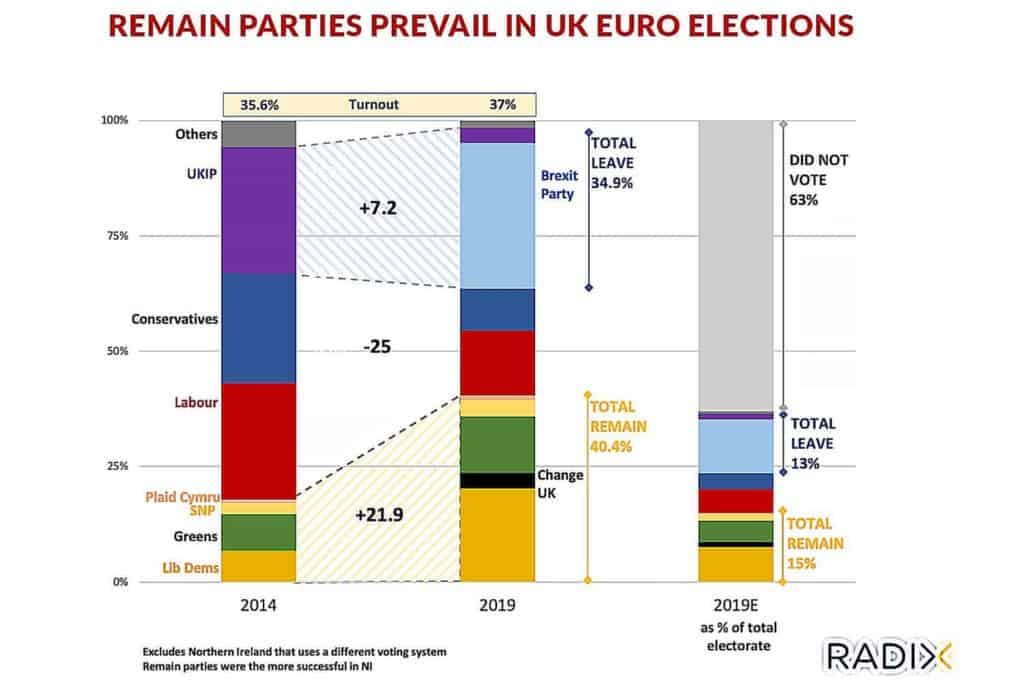 As always, everyone is interpreting the European Election results in the way that suits their own pre-conceived ideas. So here goes with my interpretation of the consequences of the election on the UK political landscape.

Just to be clear on the results: if one excludes Labour and Conservative votes as uninterpretable on the Leave/Remain divide, then Remain parties collectively came out on top in this election (first two columns in our chart). The increase in vote share for explicit Leave parties (Brexit+UKIP) was only very marginal – and below expectations.

There are two distinct consequences of the result. The first is the impact they will have on how the positions of the different UK political parties will evolve. The second is what these elections mean (if anything) on the possible outcome of a future general election or a second referendum.

Impact on the Parties

Given the success of the Brexit Party, the likelihood is that the Tories might feel compelled to move to try to occupy some of that space. They may choose to elect a no-deal leader and pursue the mantra that, whatever happens, the UK will exit the EU by October 31st.

This would be a mere repeat of David Cameron’s tactic of offering an EU referendum in response to the rise of UKIP. This time it is likely to meet with moderate success at best.

Now that senior Tories have hinted that they would rather bring down their own government than allow a no-deal Brexit, such an approach will likely result in an early general election.

Offering up a second referendum may end up being the only chance the Tories have of avoiding an early election that could be disastrous for them.

As for Labour, the most likely outcome is prolonged infighting.

If Corbyn were to come out firmly in favour of a second referendum with Labour campaigning for Remain, expect more fireworks within the party – even though some 40% of those voters who abandoned the party went to Remain parties while only 13% voted for the Brexit Party.

For Labour, the straddling of two horses has turned out to be nothing short of a disaster from which it will be hard to recover (especially since it now seems to have lost Scotland – possibly forever). The two-horse stance cannot just be wiped from voters’ minds overnight. Particularly since it has come to be seen as cynical retail politics rather than any principled stand from a leader whose main appeal was as a man of principle.

Nevertheless, the odds of Labour now supporting a second referendum as a matter of policy will have shortened. They might well spin such a move as one that does not abandon their Leave voting constituents but gives them an opportunity to affirm their vote. Even so, Labour will still likely find it difficult to mount a united campaign that is firmly for either Leave of Remain.

The Liberal Democrats are clearly the big winners. Their stance was clear and uncompromising. They have been rewarded at the polls. What energizing offer, other than opposition to Brexit, they can put together in a general election remains to be seen. As will the impact, positive or negative, of a new leader chosen from a limited field.

Lib Dem enthusiasm will be tempered by only one thing: even in a Euro election with a clear message and the main parties in meltdown, they have not yet quite managed to get back to the vote share they commanded in 2010. Nevertheless, they will be pleased that so many voters found it in their hearts once again to start putting their crosses in Lib Dem boxes.

For Change UK, this was hopefully a sobering experience. I argued before that they should never have fought this election. The fatal combination of an amateurish approach and hubristic self-confidence did it for them. Can they ever recover?

I would argue that these election results tell us very little about the outcome of either a second referendum or a general election.

First of all, the low turnout common in Euro elections means that we still have no idea how those who stayed at home will end up voting next time around – either in a second referendum or in a general election (third column on our chart).

Second, fear of a Corbyn government will inevitably drive many conservatives back to the fold in the event of a general election. A number of Labour voters might also return home.

The Brexit Party might suffer the same fate as UKIP in a general election – a significant number of votes but with only one or two seats in Westminster.

The chances of an early election and/or a second referendum will have increased.

Overall, it is hard to see any party winning an absolute majority in Westminster in a 2019 general election, were it to happen.

As for the result of a second referendum – were that to come to pass – it would be foolish for either the Remain or the Leave side to let these elections make them believe that they are bound to prevail.