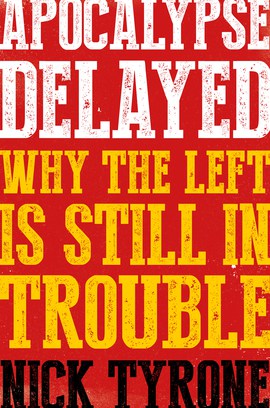 Nick Tyrone, founding CEO of Radix, has had a new book released by Biteback Publishing called “Apocalypse Delayed: Why the Left is Still in Trouble”. In it, Nick goes against the grain of prevailing wisdom which assumes that Jeremy Corbyn will be the next prime minister barring miraculous circumstances and instead states that it is very likely the next general election will be won – again – by the Conservative Party. The book delves into all of the reasons as to why this is, some circumstantial, some ideological, some just the way things are.

Radix will be hosting an event at Labour conference this year which will act as a launch event for the book, with Iain Dale as chair, and Nick, Chuka Umunna, Lord Glasman and Helen Lewis from the New Statesman there to discuss whether all Labour needs is “One Last Heave” to get Corbyn into Number 10 – or whether it is instead just a case of “Apocalypse Delayed” for the British Left.

The book is available from Amazon in hardback and Kindle editions:

The author’s share of the profits of the book will go towards funding the new centrist movement.