Yet more consequences of failure to reform 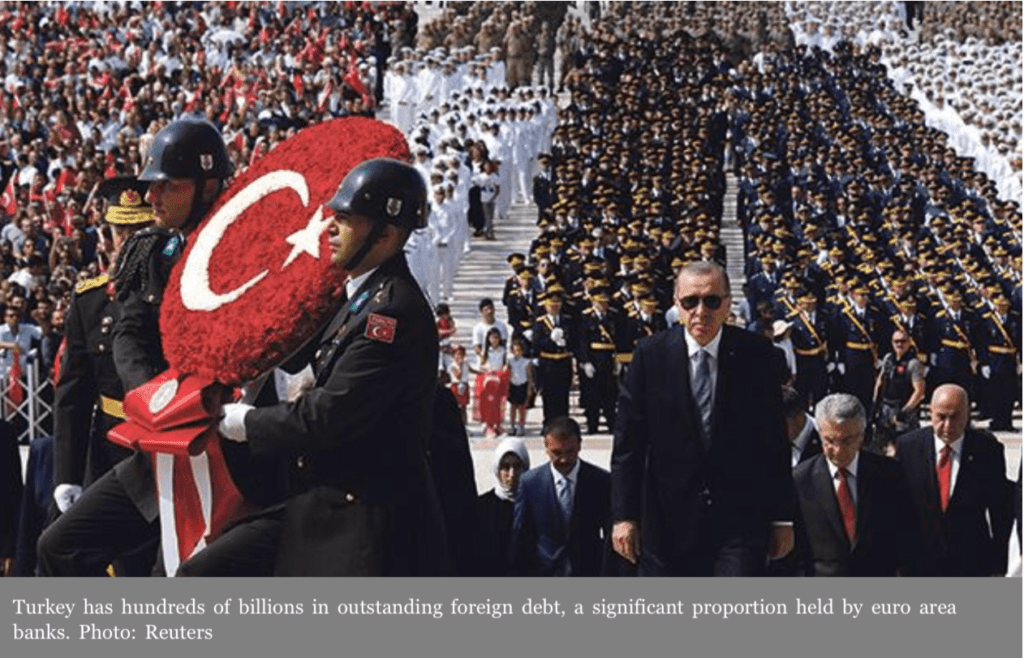 This article first appeared in the Times of Malta.

It has been reported that Germany and France are considering offering Turkey a ‘financial lifeline.’

Well, what a surprise.

What this means, of course, is that they are considering using their taxpayers’ money to achieve two things: bail out their own banks with which Turkey now has unsustainable debt levels; and trying to find ways to prevent President Erdogan from releasing into Europe millions of refugees currently stuck in Turkey where the EU has paid significant amounts to keep them.

Turkey has hundreds of billions in outstanding foreign debt, a significant proportion held by Euro area banks. This is mostly denominated in Euros and is therefore becoming ever less possible to service as the Turkish Lira continues to sink. Let us be clear, any monies coming from European taxpayers to provide Turkey with a ‘financial lifeline’ will go in one direction – to sustain European banks and their continued irresponsible lending in spite of the political risks that have been obvious for all to see for some time. This is Greece all over again – only writ larger.

At the time of the Greek crisis, I was critical of the Euro as a straitjacket that limited governments’ ability to act in a crisis. The Turkish crisis shows that, even while controlling their own currencies, countries are able to get themselves into deep trouble. In a couple of short years, Turkey has transformed itself from one of the most promising emerging economies to teetering on the edge.

Overconfidence led to private and public borrowers happily to borrow in foreign currencies, allowing their lenders to shift exchange rate risk on to the borrowers. Banks from Germany, France, Luxembourg and other Euro area countries continued to print money and build levels of debt that, all told, have now reached a significant proportion of Turkish GDP. Both lenders and borrowers assumed that there was no end to the bonanza. But there always is.

It’s almost unimaginable that Erdogan’s Turkey will put up with the national humiliation, strict conditions and intrusive monitoring of the sort visited on Greece by the EU, IMF and ECB troika. It is equally politically perilous for Germany, France and other Euro area governments to shell out taxpayer monies without such conditions. But President Erdogan has more leverage than did the Greek government. The threat of opening the doors to two million refugees to move to Europe will concentrate minds.

Have we learned anything from the financial crisis and the subsequent Euro crisis? Why have banks not been reformed but only marginally regulated? Why do we still allow them to create money out of thin air, lend almost without limit and then offer them billions in taxpayers’ money when the next debt crisis hits? The looming Turkish crisis gives the lie to those who respond that the revised Basel regulations have made banks safe. If that were the case, Germany and France would not be considering yet another bailout with the domestic political fallout that will inevitably result.

The second question is whether, using his leverage, President Erdogan will be able to secure conditions that are more favorable than those that were imposed on Greece and the impoverishment of the Greek people that resulted. If that were to materialize, it would make a total mockery of the European Union. The message would be that being part of the club of “partners” counts for nothing when it comes to solidarity. Best to be outside the club and put yourself in a position where you have political leverage over your lenders.

“We would do a lot stabilize Turkey. We have no choice”, according to reports of statements by a German official. He is right. A choice may no longer be available. But over the last decade, there was a choice – to reform a financial system that has become like the Wild West and utterly out of control. That choice was not taken. Taxpayers may yet again have to pay for their governments’ failures and the lobbying power of the banks.