Why don’t we just…bring William back home?

(This article was published by The Big Issue North) 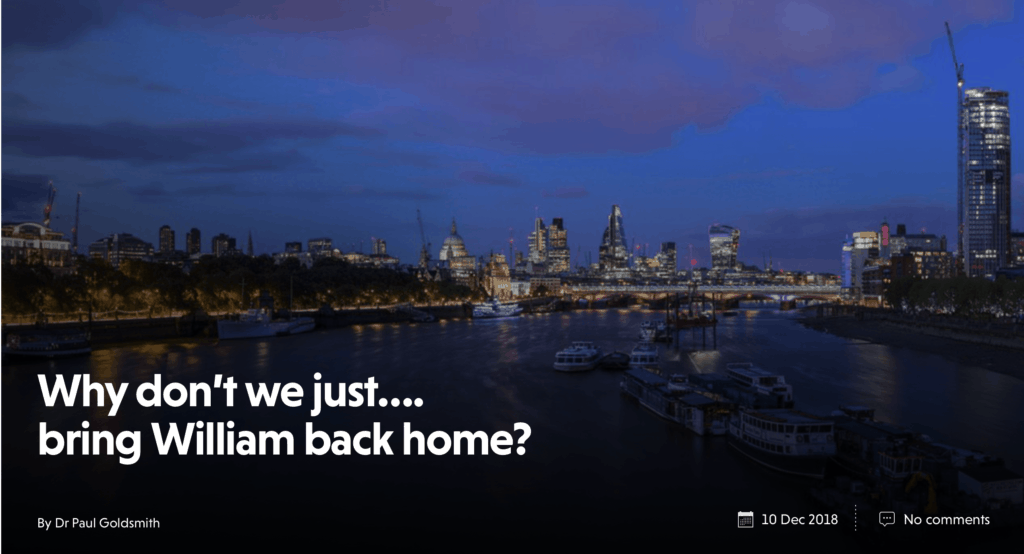 This article was published in The Big Issue North

William has done well. Identified at school as bright, received extra support. He’s first generation to go to university, encouraged by university outreach to increase working class numbers and meet quotas. For him, like many others, the future and opportunities are in the boom economy cities of the south. But most do not have his good fortune and the ability to migrate.

The decades-long migration of those with the talents the modern economy needs has led us to a trap: the south becomes more successful, so the place to move to is the south. The place to set up your business to make it most likely to succeed is the south. The place with most access to finance, to academic institutions, to transport, is the south. It becomes a self-fulfilling prophecy. This brings pressures, including house price spiralling, so who will perform all the support jobs? The lazy answer has been immigration from overseas.

Government needs tax receipts to pay for public services and will get more, particularly in the short term, if it invests infrastructure in the south, builds institutions in the south. The Westminster rule is cruel – investment follows geography, welfare follows people, all reinforcing self-fulfilling prophecies of upward spirals in the south and downward spirals in the left behind areas.

One option, suggested by some economists, is to pay people to relocate to the South East, bulldoze the “wastelands” and plant them with trees. Would the Home Counties welcome prioritised access to massive new housing development? I doubt it.

I suggest an alternative – one that requires vision and co-ordination both at Westminster and the local level, with a different approach to infrastructure and thinking about how we rebalance the demographic so we have optimal mixes of people everywhere. Rather than the situation now where we have towns full of great defenders but not the creative midfield player who can transform the team.

What if we could use tax changes to use market forces to drive these changes? What if there were major tax differentials for companies engaged in research and development, with the degree of incentive proportional to how much regional GDP was below the South East? The lowest rates of entrepreneurs’ tax for the most left behind areas to incentivise mobile, knowledge-rich companies to locate there and critically bring back key talent and start the upward spiral. Bring back hope. Make acquiring skills for those who can’t up sticks worthwhile because there is visibility on jobs. Create the need for the supporting jobs. Start to drive demand for environmental improvement, thus making the area more attractive for even more people to move back to.

The most talented can work anywhere in the UK. We need to make the environment in the north magnetic – urban and rural aesthetics, attractive housing, culture, greenery.

Increasing the pool of people for a particular job through transport is also key. It is crazy that HS3 is not being prioritised ahead of HS2. Bring it up through the North East coastal brownfields of Teesside, Wearside and Tyneside and connect to Edinburgh/Glasgow. With the Pennine cities, we create a 14 million population super-city region. Then improve hub and spoke transport to the smaller towns.

This approach has proven very successful overseas. But could it work in the UK? It already has. In the 1980s the government wanted to regenerate the London Docklands. They offered major tax incentives. The Apprentice helicopter reminds us how transformative this has been. What many do not know is that government thought the incentives would lead to factories and light industry. Market forces took it in a different direction. We need that again, but with the incentives designed to rebalance the demographic for high value research and development activity, to attract entrepreneurs. Government creates the incentives, but does not intervene too much. That’s for Just William.