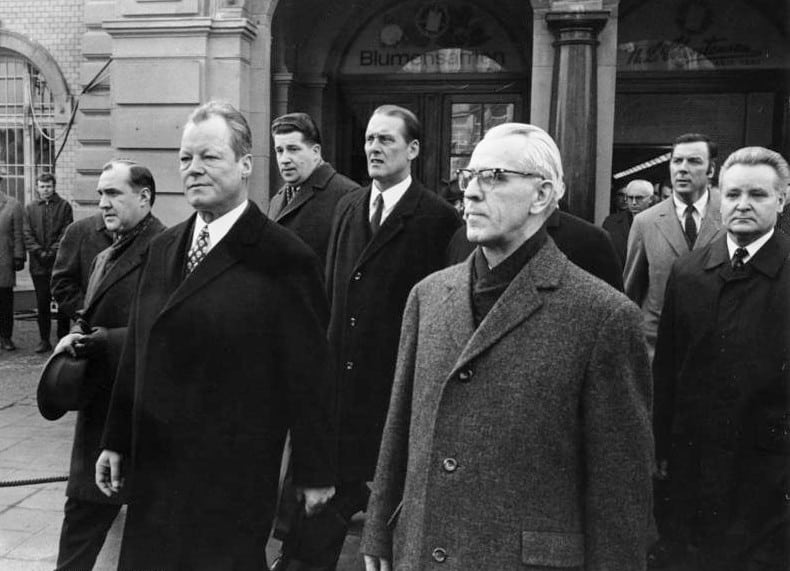 In amongst the various things to celebrate, the rueful Social Democrats of the German SPD, floundering so sadly in German politics at present, have been commemorating their rise to power under Willy Brandt 50 years ago, in October 1969.

After a hard-fought, bitterly contested election against the CDU / CSU, the SPD Social Democrats and the FDP Free (Liberal) Democrats had just enough of a mandate to join forces and overturn the existing CDU-SPD grand coalition, in which Brandt had been Foreign Minister, and form the first Social-Liberal Coalition in post-war German Federal history.

On 21 October 1969, Brandt won the vote in the Bundestag to become Chancellor and on 28 October 1969 gave his memorable and famous government declaration (in the Republican German Federation, the Chancellor announces his programme, not the Queen!).

Brandt reached out to young voters, especially those born after the war, promised to drop the voting age to 18 and famously promised that his government wanted to “dare more democracy” by being more transparent and more engaging with the citizens. Above all, Brandt wanted Germany to be a peace-loving neighbor not only to the West, but to the East.

History records his actions in bringing peaceful relations with the Eastern states of the Warsaw Pact, especially Poland and the Soviet Union, in developing détente with the German Democratic Republic. He remains the only German to have won the Nobel Peace Prize.

Why is Brandt still relevant to politicians across Europe today, and why does he remain enduringly popular?

On the face of it, he bears a similarity to one or two current political leaders we may value less highly. A brilliant speaker and politician, he was prone to depressive behaviour (after his death, his assistant admitted it could be difficult to get him out of bed in his “autumn depression”), hardly saw his family and was known for his amorous pursuits, albeit with more discretion than some modern politicians seem to manage. But that is where the similarity to today’s charismatic politicians end.

Brandt was not born to any privilege, indeed he suffered his lifetime from the stigma of an illegitimate birth to a working class family, was driven by his experiences as a young socialist, his enforced exile under the Nazis  (from whom he hid successfully  with false papers in occupied Norway) and his experiences in divided Berlin first as politician, then as mayor of the city.

His desire for détente, to improve the lives of Germans both sides of the border, was genuine and born from his experiences; his reaching out to young voters to speak with them about their concerns (in the context of the student activities of 1967 and 1968 and the rise of extremism) based on a genuine desire for a more forward-looking, youth-inspired, peace-oriented Germany in a dangerously divided Europe.

Above all he belonged to a generation of German politicians who returned to or entered politics after the war, in the war-destroyed cities of Berlin (Brandt), Köln (Adenauer) or Hamburg (Schmidt). In the words of his successor Helmut Schmidt, these politicians had witnessed what extremism and the death of democracy could mean, and had gone into politics not for power or privilege, but to ensure that “this sh.t would never happen again”.

His legacy has much bearing on today’s Europe: he was always inclusive, not exclusive in his view of Europe; he emphasised the rights of citizens to transparency and honest information balanced with the responsibilities of citizens to their society; he was fundamental in re-shaping the Social Democrats, some ten years before he came to power, from a socialist and electorally unsuccessful political party to a more centrist social democratic party that could be attractive to a broader base of voters and to the Liberal Democrats and achieve power.

He stood by his values, and made many enemies on the Right, and some on the Left, a fact largely forgotten today.

A salute to Willy Brandt, and all the Democrats in Europe, whether on the right or left of centre, whose mission it has been to bring people together, rather than drive them further apart.