What It Will Take For Macron To Succeed 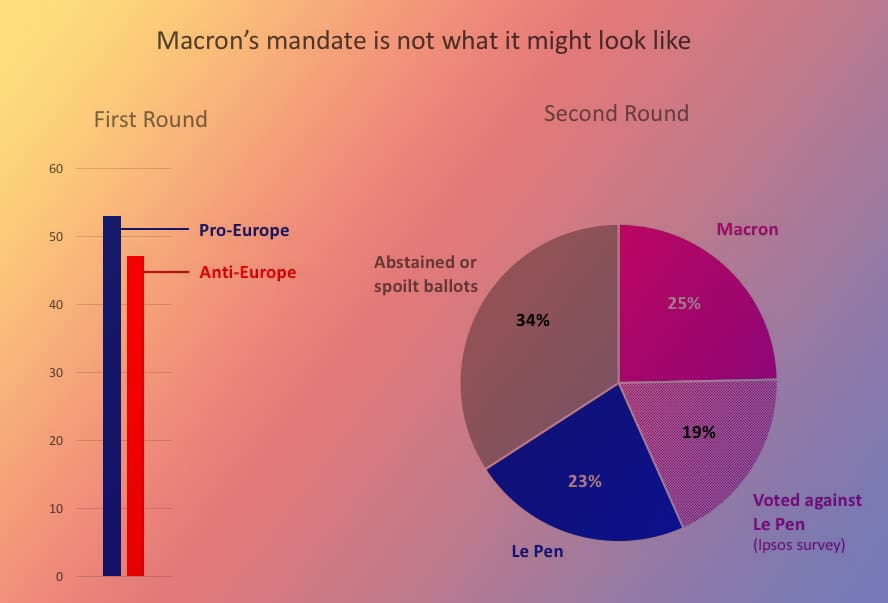 Europe has breathed a sigh of relief at Macron’s victory in France. Europe, M Macron, and liberals and democrats everywhere are right to break out the champagne. But they should also tread carefully. Within 24 hours of his victory, Macron has made his first major mistake. And the parliamentary elections are still to come.

The chart above shows just how fragile is Macron’s victory.

In the first round of the elections, nearly half the voters cast their vote for anti-European or significantly Euro-sceptic candidates. Macron’s pro-European programme has the support of barely more than half the French population.

As for the second round, the best that Macron can claim is a very narrow victory. According to an Ipsos survey, forty-three percent of those who voted for him did so only to stop Le Pen rather than because they supported him. Only 16% of those who voted for him actually support his programme. A third voted for him because of his promise of ‘political renewal’ – and it’s not clear what that looks like. A whopping 34% of the electorate either abstained or spoiled their ballots. Taking all these numbers together, an optimistic interpretation is that M Macron has the support of some 25% of the electorate – marginally ahead of Le Pen’s 23% second round tally.

Reform is a tall order

Now come the parliamentary elections and it remains to be seen what the National Assembly will look like and whether Macron will be able to govern.

As for his programme of reform, it can best be described as Thatcher lite. It is not radical, not innovative, and it fails to capture the spirit of the times. It’s a re-hashing of ideas from past decades that are of doubtful effectiveness and betray Macron’s establishment credentials.

Over decades, France has consistently proven to be unreformable. It’s a tall order for a political ingénu with a fragile victory and possibly leading a government of cohabitation to score major economic and political reforms.

Macron’s first mistake was for his initial foreign policy act to be a hasty visit to the court of Angela Merkel. No doubt his hope is to persuade the Chancellor that Europe must be reformed through, among other things, banking union, mutualisation of debt through Eurobonds or similar, the provision of some fiscal space to underpin a process of reform, and the need to support poorer countries through fiscal transfers. In all this he has as much chance of success as a snowball in hell.

By traveling to Berlin as his first act, he has placed himself in a position of supplicant. Rather than appreciating such a gesture, Germany will interpret it as proof of weakness. There will be no magnanimity. There will be no help. Rather he is likely to be sent back home, politely of course, but with clear instructions to sort France out – and make it more German – before making any requests of Germany. In rushing to Berlin, he has behaved like a schoolboy rushing to mutti for permission to govern and to beg for support.

If Macron is to succeed, he needs to behave like a confident leader – for France and for Europe. He must refuse to play second fiddle to Germany. He must stress where France and Germany have common interests while also being clear that, when views diverge, Germany will not be allowed always to prevail. That, if Europe is to succeed, it needs radical change and that France will push relentlessly for such change even if it means confrontation with Germany.

Only then can Macron truly hope to use his still fragile victory to bury his extremist opponents once and for all. A show of strength in Europe and a clear willingness and ability to stand up to the ‘there is no alternative’ German mantra is what will give him added authority at home possibly to enable some degree of reform.

It remains to be seen whether the youngest French leader since Napoleon can muster some of the bold audacity that is needed if his election is to mark a true French and European revival. Let us all hope he can pull it off.