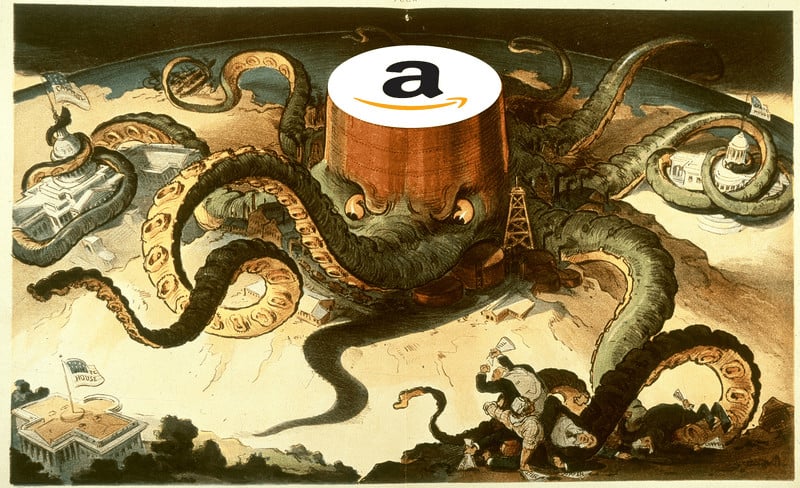 I have to report a great shout of victory – or at least a few steps towards it – from the antitrust journalist Matt Stoller, whose newsletter Big is essential reading for those of us who believe that the massive growth of monopoly power  is the main reason why we are tiptoeing into a cost of living crisis.

He talks about three breakthrough events which have taken place in the US political scene this month.

A great deal of this is down to the appointment of Lina Khan as chair at the Federal Trade Commission last year, followed a few months later when Jonathan Kanter took the helm at the Department of Justice’s Antitrust Division.

“Khan and Kanter are perhaps the most aggressive proponents of antitrust enforcement in decades, returning competition policy to the basic view that when it comes to corporate power, big is usually bad,” wrote Stoller in his latest edition.

Event #1 – “Kanter at the Antitrust Division filed a statement of interest in a court case asking for the narrowing of the antitrust exemption for Major League Baseball. Baseball is embroiled in litigation over its choice to eliminate 40 minor league teams, and has been heavily criticised for mistreating minor league players. It was trying to use its antitrust exemption to get the lawsuit dismissed…”

Event #2 – “The Federal Trade Commission(FTC) voted to resurrect the Robinson-Patman Act, a bill prohibiting corporate bribery and price discrimination by middlemen that hasn’t been meaningfully enforced since the 1970s..”

Event #3 – “The third big policy action was also at the FTC. The commission forced some significant restrictions on private equity firm JAB, which is seeking to roll-up veterinary care clinics nationwide. Under this decree, JAB must get permission to buy up a speciality or emergency veterinary clinic within 25 miles of any JAB-owned clinic in Texas and California…”

As Matt Stoller says: “It takes a while to stop a giant ship, turn it around, and get it going in the opposite direction. That’s where we are with antitrust. We started this journey in 2013 or so, and finally got the ship stopped by the end of the Trump administration. Well, the ship has turned around, and it is beginning to move in the right direction. Slowly. But it’s speeding up.”

Some of the big antitrust laws going through congress have run into political problems, led by the monopoly cheerleaders like Apple CEO Tim Cook, Amazon CEO Andy Jassy and Google CEO Sundar Pichai. There is still a long way to go, of course but we are now firmly on the way.

So I have to pay tribute to people like Matt Stoller, and Barry Lynn of the Open Markets Institute.

I launched an antitrust newsletter for the UK via Radix some years ago, which you can still read here, but it was clear that none of the usual funders who might have been prepared to fund us were interested in this issue, so in 2021 – after Stoller launched Big ­– we stopped publishing it (though I would be more than happy to re-launch it if anyone ever wanted me to…).

But it does raise the question why – with some notable exceptions like Andrew Tyrie – we have been so slow in the UK to get onto this economic shift. Why have our political parties been dragging their feet grasping what the fatal ideas of two American economists would mean in practice – Milton Friedman and Robert Bork?

I blame the Liberals. And this is why…

Because conservatives don’t really believe in free trade – they think that just means letting the strongest ride roughshod over the market (the precise opposite of what it actually means) – even when it is necessary to protect the market. Socialists, on the other hand, don’t believe it markets at all. Which is why they are so determined to ‘rationalise’ everything – to control a handful of semi-monopolies which will then be all they need to control the economy.

Monopoly power is the most important Liberal critique of the economy, yet – since the Liberal voice has been stilled in economics in the UK for some generations now – then so has the antitrust argument.

At least, I believe that is the case – it could have been that, since Lib Dems lost interest in money and Labour lost interest in policy around power, we are stuck with this situation. I hope not,

T any rate, this is why the radical centre is so keen on the idea that small is not just beautiful – to coin a phrase from Fritz Schumacher’s publisher – it is also effective and sustaining in its simplicity.