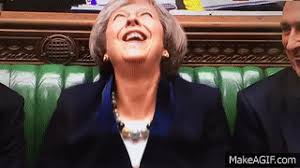 It’s déjà vu all over again.  Theresa May got a deal.  She and the EU announced it with great fanfare, and then, within hours, it became clear that she couldn’t get it through Parliament as the DUP and others came out against it.  In that one sense May did a better than Johnson: at least her fragile Parliamentary coalition fell apart after her deal was announced – Johnson’s was holed below the water by the DUP even before.

And they are right, of course, because not only from their point of view but from that of anyone concerned about holding the United Kingdom together, it is a worse deal than May’s.  It includes, in effect, a border down the Irish Sea which in the words of his predecessor is “something no British Prime Minister could accept”, even if she will now loyally vote for it.

Others will too, who did not previously support it: many but not all of the Spartans have finally woken up to the fact that Brexit could be in last chance saloon. Turn down a deal now – any deal – and the odds are tipping against any sort of Brexit ever.  But will they all support it, even against the advice of the DUP? Surely not.

Meanwhile, some but not all of the whipless Tories may be tempted back into the fold by the prospect of an orderly Brexit and readmission to the party, but most of them anyway voted for May’s deal last time round, while others have taken their expulsion as grounds to enter the remain camp .more wholeheartedly.

And even if they can all be brought to heel still, without the DUP at least a dozen Labour MPs will need to risk their careers and reputations to vote through Johnson’s deal, in the process almost certainly handing him the next general election.  It’s possible some might – John Mann is a candidate, but Hoey will vote no, and while others are making noises will more than a handful really be tempted to defy Nick Brown’s remarkable effective Labour whip? The Conservatives want us to think so but they have been wrong every other time on this.

Of course, Johnson and his supporters say they are confident that they can clear the Parliamentary hurdle, but they would say that wouldn’t they? By my judgment, they are still a minimum of ten votes short.  They will not get the deal through.

In practice, the widespread speculation is that the sole purpose of the deal is to set the terms for that elusive People v Parliament election.   This of course was the original Cummings’ intention, based on what turned out to the misguided assumption that Labour could not resist the call of a general election.  Cummings was wrong then, so could he have miscalculated again?

The Government has already lost control of Saturday’s order paper.  On previous occasions the People’s Vote campaign have held back and held back, resisting the temptation of pushing for a referendum vote until the numbers were right.  Has that time now come?  It is uncertain but a second referendum amendment to Johnson’s deal is probably the only way it will pass Parliament so whether or not it happens on Saturday it is nearer than it has ever been.

This is because the only alternative – were Johnson’s deal to go the way of May’s – would be an extension and a general election.   Among the Opposition only the Lib Dems, the SNP and a handful of the most fantastical members of the Corbynite cult really believe that they stand to gain from that, and the Lib Dems have self-denyingly said that they would set aside their electoral ambitions for a confirmatory remain v. deal referendum.

So a second referendum seems to be where we are finally headed one way or another, but every time I mention this prospect to my more Eeyore-ish remain friends they voice a fear that leave would win again and this may also be Cumming’s most serious miscalculation.

Prior to an alternative negotiated deal being available, any referendum would have needed to be between remain and a self-described, no deal ‘clean’ (sic) Brexit. The concerns of business and experts about the impact of the later would have been airily dismissed as a continuation of project fear, and the desperate and understandable, if mistaken, urge to ‘get Brexit done’ and move on could well have seen the leavers home.

Now, however, Johnson will have little choice but to defend his own deal as the alternative to remain, and this is when finally referendum two ceases categorically to be a rerun of referendum one.

Because finally the leavers would be forced to defend a reality, rather than pedal fantasies.  Their campaign could no longer be all things to all people.

Long ago they abandoned the pretence of a Brexit sunlight upland generating millions for the NHS.  Now they would need to defend proposals that really do drive a coach and horses through the Good Friday Agreement.  The fantasy of tariff-free trade with the EU would have died a death and the idea of Turkey joining the EU any time soon would surely stretch even the credulity of the Daily Express beyond breaking point.  Fifteen different Brexits could no longer be rolled into a single leave proposition in which each voter could chose their own favourite imaginary outcome.

And if we cannot defend the deal that we currently have as EU members in such circumstances against such a flawed and inadequate proposition, then I’ll eat a straight banana.