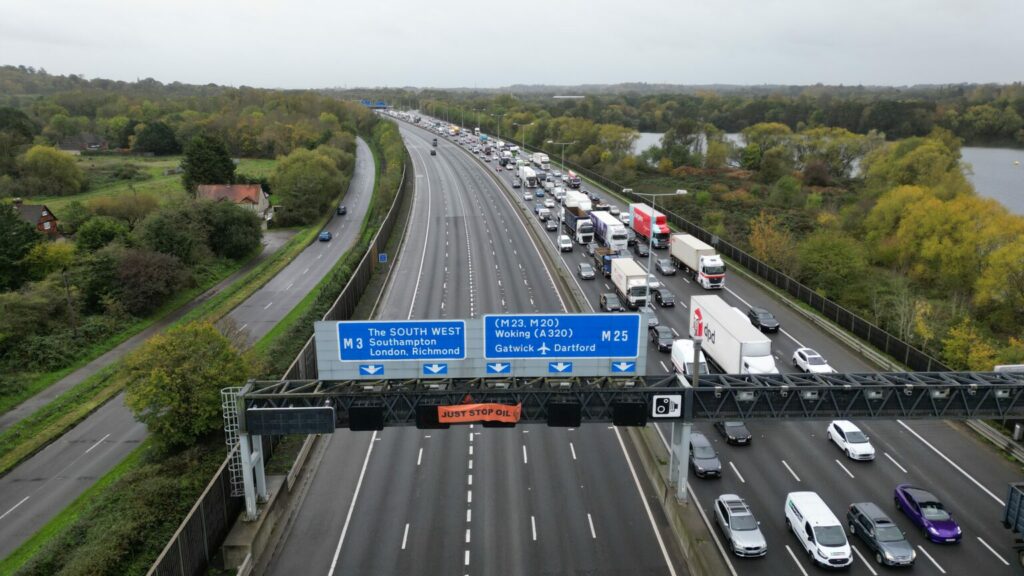 Many years ago, I heard the doyen of campaigners, Des Wilson, explaining why he didn’t think that lying down in front of traffic was a useful tactic of you wanted to change people’s minds.

He described how he had asked one green campaigner who had blocked the road, near his home in Brighton, what they wanted to achieve.

“Well, at least we are making people think!” said the demonstrator.

Consequently, I find myself in something of a dilemma.

On the one hand, I feel a huge sense of admiration for those people who are brave enough to climb those gantries or to glue themselves to the road.

Yet ever since the XR group targeted a commuter DLR train at Shadwell (they were later cleared by a jury). I have wondered whether their tactics might not be counter-productive.

This matters, after all. There is an old Marxist idea that, if you can provoke the other side into behaving tyrannically, then you will win. There is some evidence of this – it depends a little on the old argument between suffragettes and suffragists.

What I can say for their M25 tactics is that there was a brilliant interview (from 27,30) when a Just Stop Oil spokesperson reduced Sarah Montague to stuttering silence at one point on The World at One last week.

Alex de Koning began by accepting the criticism by Tony Banbury, who had got stuck at Junction 20 because of an action and missed his father’s funeral, that he was quite right to be furious.

“It’s a terrible thing to happen to anyone and I would be furious too,” he said.

He managed the interview by limiting what he said and leaving silences when he had finished which then had to be filled by the interviewer.

It was refreshingly direct and wonderfully convincing.

Why are you doing it then, asks Sarah Montague in the end?

“Because the government is behaving criminally, Sarah,” he said. They are opening up more than a hundred new oil licences, when they know what that means.”

Why don’t you do something else, like start petitions or run for office, he is asked?

“Sarah, do you think we haven’t tried this?” says de Koning. “We have tried petitions and running for office, for 50 years … We don’t need fancy words any more – we need action. We need radical change.”

That is of course a reasonably friendly interview compared to some of the more pompous news presenters, like Susanna Reid on GMB, who cut his colleague Sam Johnson off before he had said very much at all. Not to mention the Daily Mail, for whom he was an ‘ecofanatic’.

Of course, Just Stop Oil isn’t standing for election. They don’t have to be loved. But when the leader of the Labour Party feels the need to clamp down on your activities – you need to make sure your actions affect government ministers before they affect ordinary members of the public.

We don’t need to be any more divided on this issue than we already are.

And when GB News shamefully assumes that we all know supporters of renewables are in the pay of Moscow, then we all need to be a little more careful about mass public opinion.

A tale of three cities