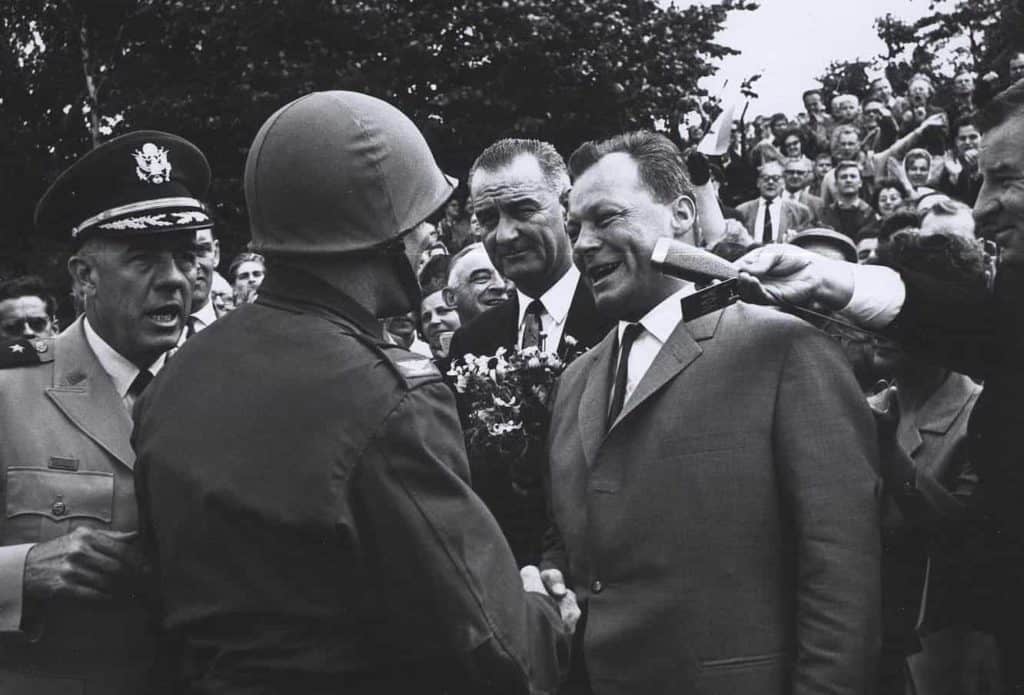 The German SPD Social Democratic party is in deep crisis. A reluctant coalition partner once again with Angela Merkel’s CDU, poll ratings place the SPD currently at 14 per cent at a Federal level, about the same as the far-right AFD and far short of the Greens at 20 per cent.

While a number of SPD ministers are making a good impression personally in the current coalition  – Maas, Heil, Scholz – the party seems directionless, rudderless and led by a leader who has no prospect of becoming Federal Chancellor anytime soon (commentators ungenerously describe Andrea Nahles’ public speaking style as resembling a foghorn).

The party that for decades represented the working man and the measured left- of-centre is in dire need of renewal.

How very different from 1969. In fact, 2019 marks the 50th anniversary of the Social Democrats’ great breakthrough on the Federal stage in 1969, the formation of the first SPD-led coalition and the first SPD Chancellor. It is salutary to reflect and ask what the current SPD might learn from its political forefathers.

As 1969 dawned, the SPD, led by Willy Brandt, entered the third year of an unlikely and very successful grand coalition with the CDU under Chancellor Kurt Georg Kiesinger. The Conservative-Liberal coalition under Ludwig Erhard, the father of the social market economy, had collapsed in October 1966 under budgetary pressures arising out of Germany’s first post-war recession, with the FDP resigning from government and going into opposition for the first time.

Anxious to avoid a national crisis, potential elections or worse, a Social Democrat-Liberal coalition, the CDU opened the door to coalition discussions with the SPD, having jettisoned Erhard and nominating Kiesinger for Chancellor. The “man in the shadows”, Herbert Wehner, chief strategist for the SPD, sat long hours with Kiesinger drinking red wine (despite his diabetes!) and hammering out an agreement, which he managed to sell to party leader Willy Brandt.

A coalition contract agreed, a right-left coalition took office in December 1966, with Kiesinger as Chancellor and Brandt as Vice Chancellor and Foreign Minister. A famous photograph from December 1966 shows Brandt, the exiled refugee from the Nazis in the 1930s and 40s, shaking hands with his new boss, the former Nazi party member, visibly uncomfortable with the whole thing.

Officially, Wehner (a former communist) and Brandt (the anti-Nazi Socialist) declared that they had decided enter into coalition to save the country from its economic crisis. In fact, Wehner had convinced Brandt of the need to show the German people that the Social Democrats could govern, not just oppose, and only this way could they significantly increase their share of the vote, perhaps enough to lead a coalition of their own one day.

The price they would pay would be the anger of much of the youth wing of their party, the radicalisation of part of the youth movement, the growth of the extra-parliamentary opposition (1967 and 1968 saw the apotheosis of the student movement in Germany, 1968 the first attacks by what would become the Baader-Meinhof group and the Red Army Faction)

It worked beautifully. A remarkable level of collaboration between leading ministers of the two parties brought the economic situation under control and by 1969 change was in the air. In March, the Liberals declared themselves ready, in principle, to entertain a coalition with the SPD after the September elections, if the two parties could gain enough of a mandate. A vicious, enthralling campaign ensued, largely led by the fearsome Finance Minister Franz-Josef Strauss for the CDU/ CSU alliance, by Brandt for the SPD. Readers are invited to view Thames TV’s fascinating summary of the campaign in 1969 for British viewers.

On election night, 28 September 1969, the SPD and FDP theoretically had achieved sufficient mandate to form a government. Kiesinger (and Wehner) were keen to continue the existing coalition but Brandt was determined this time that the SPD would be in charge, even with a small working majority with the FDP. Unlike the interminable negotiations after the elections of 2017, Brandt and Liberal leader Scheel concluded their agreement in just three weeks.

On 21 October, Willy Brandt became the first Social Democrat chancellor of Germany (an honour he still shares with only two others, his successor Helmut Schmidt and, much later, Gerhard Schröder).

In a famous opening speech to the Bundestag, he promised “wir wollen mehr Demokratie wagen” (“ we want to risk more democracy”) as the SPD sought to engage politically with the populace in new ways, especially with the unhappy restless youth of Germany, alienated from the Conservative traditions of the CDU.

More importantly Brandt began to put into practice his wish for a new relationship with the Federal Republic’s Communist neighbours, including East Germany, in a significant contribution to the détente of the 1970s.

The rest, as they say, is history. There were 13 years of a SPD-led coalition, Brandt then Schmidt, the famous treaties and accords with the communist states of Eastern Europe, the acceptance of Poland’s western border, Brandt’s “falling on knees” in Warsaw in 1970, his Nobel peace prize in 1971, successfully weathering the oil crisis of 1973, getting to grips with and ultimately defeating the RAF in the mid 1970s. The golden age in many ways of the post-war SPD together with their “friends” in the FDP.

The SPD of the late 60s had three things that the modern SPD does not: first, clearly articulated policies different from the CDU and based on the personal expertise of its leaders, especially in foreign affairs (Brandt’s great vision was an accord with the Communist East, based on his experiences as Mayor of Berlin, Schmidt meanwhile had been his party’s defence and security expert, and was the first to see the danger of the new intermediate range nuclear missiles deployed by the Soviets).

Secondly, a charismatic, proven leader in Willy Brandt, who – even if he had never become Chancellor – would have been famous as the Mayor of Berlin who managed the crisis of the ultimatum of 1958 and the building of the Berlin Wall in 1961. A great speaker, a man of personal charm, an internationalist, linguist, an opponent of the Nazis who had developed a significant international profile while in Berlin.

Thirdly, the most wily political strategist of his generation, Herbert Wehner, the eminence gris of the SPD who had a plan to bring the party to power and who, it is said, played a major role in replacing Willy Brandt with Helmut Schmidt in 1974. A man no one much liked but everyone respected. A man who could never have been leader himself, but knew how to put and keep the SPD in power.

Perhaps more than anything, this was a party leadership hungry for power after 17 years in opposition and three as junior partner in government. Hungry enough to accept intense opposition from its own left-wing ranks to convince those who did not traditionally vote SPD that they could be trusted to govern. A leadership that became hate figures for many young radical left-wingers “abandoned” by the parliamentary party.

Charismatic leaders, the courage not to try to please all sides, and a brilliant strategist at its heart, the SPD of 1969 enjoyed advantages that the SPD of 2019 clearly doesn’t. The most popular politician in Germany at the start of 2017, SPD’s foreign minister Sigmar Gabriel, is nowhere to be seen, the sad campaign of Martin Schulz and the even worse performance of Andrea Nahles post election has left many SPD supporters wondering what next – and many traditional voters contemplating a vote for the Greens, die Linke or worse, the populist AfD.

Kevin Kühnert, the high-profile Head of the Young Socialists in the SPD, is right to argue against a continuation of the coalition.

The party needs to return to opposition, needs to find a distinct agenda that speaks to all the “hot buttons” for Germany in the 2020s: migration, refugees, digital infrastructure, environmental protection, social inequality, Germany’s role in NATO. It needs above all to find a leader who gives the impression that he or she can govern the country.

If it doesn’t, it could lose it place as the leading left-of-centre party to the Greens. And witness perhaps another unlikely, but intriguing right-left coalition after 2021. Now that would be a radical centre at the heart of Europe!