What a radical centre government might do – in Australia 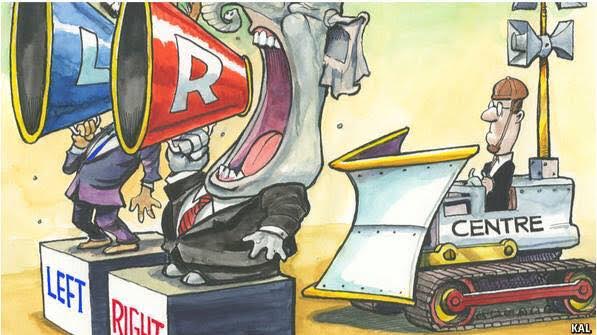 Here is our Blueprint for Government.

We don’t need any more Royal Commissions, reviews or enquiries. We have all the information we need to fix the failures in government. We have recommendations from hundreds of investigations and reports that have never been implemented.

We want a moratorium on enquiries.

We want a moratorium on consultants.

3. No more ‘commercial-in-confidence’ clauses in allocations of taxpayers’ money.

Taxpayers have a right to know exactly how our money is spent. ‘Commercial-in-confidence’ clauses should be removed from all contracts involving taxpayers’ money. If a business wants confidentiality, it should find an investor other than government.

No more ‘commercial-in-confidence’ clauses. No exceptions.

4. A ten-year limit on tenure for public servants.

The ancient Greeks pioneered democracy with term limits for elected representatives, and limits on tenure for public officials. These measures didn’t fall from the sky – they emerged from practical experience in democracy.

By ‘public servants’, we don’t mean teachers, nurses, doctors, police, office cleaners or power generation engineers (none of these people call themselves public servants). We mean people who devise policy and execute/communicate/monitor/evaluate/and report it.

5. A minimum age requirement of 30 for staffers and advisers.

The problem of inexperience and social immaturity amongst the bloated numbers of parliamentary staffers and ministerial advisers has been thrust into the public eye in recent times. These jobs are essentially apprenticeships for career politicians. Both the numbers and the real world inexperience need to be curtailed.

We seek a cut of 50 per cent in the number of publicly funded staffer and adviser positions available to politicians, with a minimum age-requirement of 30 for these roles.

6. No more public funding for industry and provider peak bodies and lobbyists.

The full number of industry peak and advocacy bodies that are funded by government to liaise with government has never been disclosed – in agriculture alone there are hundreds. In the health sector there are hundreds. The purpose of these arrangements, in theory, is to facilitate communication between government and industry bodies; in practice, their function is to fleece consumers and taxpayers, and exclude both from policy-making in the interests of industry groups.

We want an end to public funding for all industry and provider peak bodies and their advocacy and lobbying arms.

7. No more outsourcing to contractors – insource to communities.

The outsourcing of service delivery to external contractors has reduced the public accountability of both governments and their contractors. Both are able to claim they are not responsible for service delivery failures. In the human services, the perennial excuse of contractors for poor service quality is ‘insufficient funding’. In defence or telecommunications or hotel quarantine services, it is ‘inadequate contracts’.

In the human services, the outsourcing of service delivery to external contractors has disempowered consumers in health, aged care, community care, employment services and indigenous affairs, and made them powerless ‘clients’ in fields where self-help and mutual support are vital ingredients for well-being.

In these areas, service delivery should be ‘insourced’ to communities so that self-help and mutual aid can be nurtured – with an independent third party to monitor expenditures and evaluate movements in productivity. The Empowered Communities  model, developed by eight indigenous communities for the insourcing and aggregation of government funding, should be extended throughout the human services. www.empoweredcommunities. org.au

We want an end to the outsourcing of service delivery to external contractors in the human services and its replacement by insourcing to communities.

8. A Citizens Jury to adjudicate on contentious governance matters.

A unit should be established in the Australian Electoral Commission to conduct Citizens’ Jury processes on governance matters referred to the Commission for adjudication including:

In these processes, the AEC will select citizens by sortition (random selection) and train them to adjudicate on matters referred to it for adjudication by either of two methods: a vote of either House of Parliament, or public petition by a certain number of citizens. Decisions of Citizens Juries in these matters would be made binding on the government of the day.

A standing Citizens Jury selected and trained by the AEC would serve for a one year term.

There is currently no independent mechanism in our system of public governance whereby citizens can adjudicate in the public interest on matters such as these.

We want Citizens’ Juries to constitute this independent mechanism.

9. Governments must report on their management and administration.

All government departments, agencies and statutory authorities would be required to report annually to the Australian National Audit Office the proportion of their revenue allocated to internal management and administration (with an itemised breakdown of this expenditure), and the proportion allocated to front line service delivery.

This reporting should have been introduced decades ago. Better late than never.

10. Public sector salaries should be capped at the current pay of the Prime Minister.

It is an absurd situation in government that departmental heads, university vice-chancellors, chief medical officers, and police chiefs receive a salary that is higher than that of the Prime Minister. These salaries should be capped at the current pay of the Prime Minister ($549,000).

11. A lifetime ban on retiring ministers trading on insider information.

Retiring ministers of the crown should be prohibited from trading on insider information  and connections by accepting paid appointments to company boards or paid advisory or consulting roles with corporations or governments following their service in parliament.

In turn, government departments and agencies should be prohibited from dealing with retiring ministers who act in paid capacities on behalf of corporations or governments.

We want a lifetime ban to eliminate this practice for good. We need a clean break in culture that is unambiguous.

12. A Citizens Jury to adjudicate on media bias and unethical conduct.

A Citizens Jury should be established in the Australian Communications and Media Authority (ACMA) to adjudicate on matters of media bias and ethical misconduct by journalists and media proprietors.

The Citizens Jury would have the power to order high-profile retractions or corrections where it finds cases of media bias and ethical misconduct. There is currently no independent mechanism in our system of public governance whereby journalists and media proprietors can be held to account. We want Citizens’ Juries to constitute this independent mechanism.

In this process, the AEC will select citizens by sortition (random selection) and train them to adjudicate on matters referred to the ACMA for adjudication by either of two methods: a vote of either House of Parliament, or public petition by a certain number of citizens.

A standing Citizens Jury selected and trained by the AEC would serve for a one year term.
_

These measures are not the last word in changing the way government works. In truth, they are just the beginning. But they would constitute a seismic shift in the culture of Canberra, and the beginnings of a rebalancing of government and civil society.