Why is the West betraying its eastern friends? 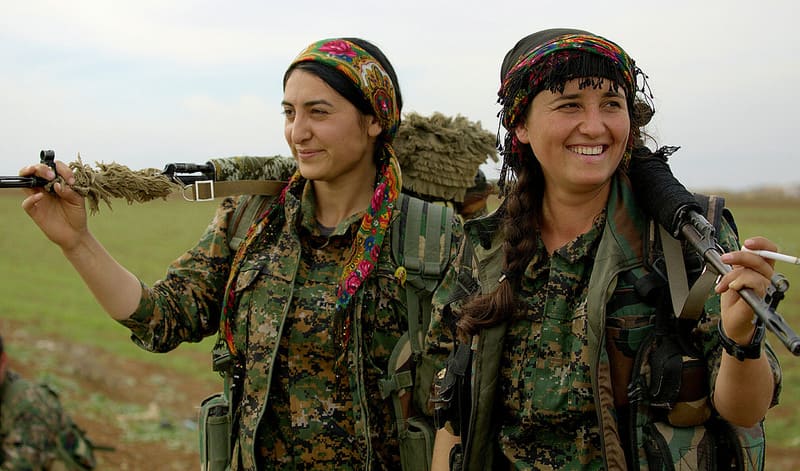 How far will the West go in deserting the Syrian Kurds in their struggle against the Turkish Islamic Ogre?

On March 18 2018, the Turkish army, supported by mainly Syrian rebel elements, took the city of Afrin in North West Syria, a city that had been peacefully administered by the Kurdish movement YPG. Since 2012, the maps of the French Mandate in Syria (which operated between the two world wars), described Afrin as a 90 per cent Kurdish settlement.

The Turkish attack, preceded by a terror bombing targeting the civilian population, led to the flight of over a hundred thousand refugees. Syrian rebels embarked on a string of abuses, especially against the female elements of the YPG – a secular movement advocating equality between men and women. As Frenchmen, we can be ashamed that these Syrian rebels, ideologically affiliated with Al Qaeda, were smuggled in by the DGSE in 2013, on the orders of President Hollande.

As the Turkish Minister of Defence said in January 2018, his military operation in Syrian territory, described, not without a strong dose of cynicism, as an “olive branch”, is intended to “cleanse” all of the Rojava (Kurdish territory covering northern Syria and de facto autonomous since 2012).

The soldiers of Muslim brother Erdogan have been given the mission to drive out all YPG Kurds – a movement close to the Turkish PKK and therefore considered “terrorists” by Ankara. High on its success in Afrin, the Turkish army now dreams of taking Manbij (a mainly Arab settlement town) on the banks of the Euphrates and then continuing east to seize the townships of Kobane and Hassaké, which have always been overwhelmingly Kurdish.

Why should the West care about these incomprehensible regional quarrels peculiar to the complicated East? Did we not voluntarily leave this region after the Second World War, when we had administered it under the mandate of the League of Nations after the dissolution of the Ottoman Empire following its defeat in 1918?

The problem is that we have been at war with ISIS since 2014.  Kurdish fighters, associated with a few moderate Arab elements within the “Syrian Democratic Forces”, have been the only ones to help us effectively regain ISIS’s stronghold of terror in Raqqa (where the hostages were French journalists in particular).

YPG Kurds heroically mounted a resistance against the Kobane headquarters (September 2014-June 2015) launched by the fanatical soldiers of the new Caliphate. They are the West’s main allies in our fight against Daesh. They are trained, assisted and armed by the special forces of the United States, France and Great Britain.

And now, do we intend to let our Kurdish friends down under the pretext that the SDS work on Syrian territory is complete, and buckling to Erdogan’s threats? Let’s not harbour any illusions. The new sultan is pitiless in the face of political weakness. The more we give in to his blackmail, the more he will demand of us.

Our need to continue to support our Kurdish allies of the YPG is not some kind of idealism. It’s realism. Whoever abandons their friends in the East becomes immediately despised. Why are the Russians so respected in this region, to the extent that the King of Saudi Arabia – their opponent in the Syrian civil war – visited Moscow in October 2017? Because, in time of difficulty, they did not abandon their Syrian Baathist friends – Russia’s allies for fifty years.

Because they did not behave like the Americans in early 2012, hugging Mubarak close only to drop him like a stone one week later.

The more the West abandons its friends in the East, the more it will be despised. Forty years of cowardice!

And what about the consequent disasters? In July 1974, we let the Turkish army invade northern Cyprus: the island is still divided. In 1975, we abandoned the Lebanese Christians, whose only crime was to save their state against Palestinian militias: fifteen years of civil war followed.

In 2003, General David Petraeus asked the citizens of Mosul to help him and believe in the American democratic project in Iraq. What did those who followed him think when the ancient capital of Eastern Christianity fell to Daesh in June 2014?

To abandon one’s friends is not only morally wrong, it is an insult to the most basic geopolitics. Our war against Islamic fanaticism is a long-term affair. We need reliable Middle Eastern allies. The Kurds have shown that they are such allies. Let’s protect our friends!