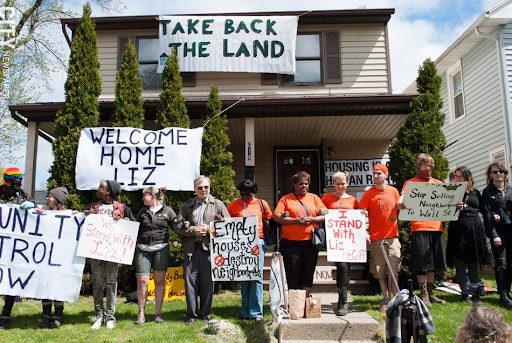 Danny Kruger closed the recent Radix Big Tent leaders’ summit by suggesting that community land trusts (CLTs) should become much more common. He was echoing a theme of the day, and a growing topic among politicians from all parties, that of community ownership and power.

There is growing evidence of the benefits of community-led approaches to housing. The Department for Levelling Up, Housing and Communities recently published an academic study on community led housing loneliness. It found community-led approaches reduce loneliness and foster social cohesion, both through the physical designs, the preference for sociable spaces, and the process of bringing people together to develop, manage and steward their homes.

Other recent research finds wider health benefits, higher environmental standards and a greater public support for housebuilding. All at a pace comparable to private and social developers, while achieving medium to high value for public money.

In the last decade, there has been growing support from policymakers in national and local government for CLTs and other forms of community-led housing. Policies like the Community Housing Fund have seen the pipeline of new homes swell from around 5,000 five years ago to potentially 23,000 today.

Bristol, the host of the next Big Tent event, has long been a hotbed of community-led housing activity.

It boasts over 1,000 homes in the works, from teeny Tiny House schemes on garages to the Southmead Development Trust’s 120-home regeneration project. Students are taking over a hall of residence as a co-operative. Council tenants are building their first two flat-pack homes in outsized back gardens so their children (with grandchildren) can get a home of their own. First time buyers are being trained up to do the fixtures and fittings in their half-finished homes.

Bristol City Council has supported this through a social value-oriented land disposal framework and internal capacity to facilitate projects.

But in Bristol, as across England, it remains a niche pursuit. It’s something for small, awkward sites, existing in a parallel world to the major developments in the city centre.

There is only so far one can go in supporting growth from the bottom up, particularly in competitive land and housing markets that are hostile to any kind of new entrant. Small private builders have been in terminal decline since the 1980s for many of the same reasons that community led housing has struggled to take off.

It therefore remains a tough road that few can travel. Too many of those most in need of affordable housing, most in need of power and agency, are left behind, benefiting only as passive end users where affordable homes are built. While CLTs are overrepresented in the most deprived parts of our country, only a tiny minority of those excluded from the market by their poverty, race or age are actively involved in running them.

Kruger’s suggestion raises the question: how would it become commonplace?

Our sector is working on ways that you can rewire the housing market, soldering community agency and ownership into existing models of delivery and management. Build-to-rent flats are managed as co-operatives; intergenerational care and retirement communities are cohousing communities; new garden communities and their affordable homes are cocreated with and stewarded by local people through CLTs.

These are not theories – there are real-world examples of each, but they are rarities. The question is how, with sticks and carrots, policymakers could see them more widely adopted.

One of my great inspirations is the ‘Wessex’ or ‘Middlemarch’ model of CLT-housing association partnerships, which has seen more CLT homes built in Dorset, Somerset and Devon than most of the rest of England.

The real lesson from this is, I think, often misunderstood. What the local enablers did was to run an action research project to establish: what did communities trying and struggling to ‘do’ CLTs actually want to achieve? What ‘rewiring’ model could achieve 80 per cent of this, with a greater chance of success? How can we develop a professional role to facilitate this, one that has value for the party in the process with the money, so it becomes a self-sustaining enterprise?

Homes England has tentatively supported this model, asking the last round of applicants for Strategic Partnerships to set out their plans to partner with CLTs. One made it a major feature of their bid. Others have decided to do more of these kinds of projects as a result.

This is the model that so enthused Kruger. Not only because it helps to deliver more homes in sensitive locations in a way that communities can support. But because it builds local capability, it reduces loneliness, it improves social cohesion.

What other models can we develop that match the conditions and opportunities in different local markets?

The prize here is more than housing units. It’s a different way of seeing the value of housebuilding.

Talk of community power often focuses on pubs, libraries and community centres. These matter, of course.

But there are 24 million homes in England, in every community, worth £7.6 trillion. Imagine the impact if we went from 0.6 per cent of our housing stock being community owned to 6 per cent. That would still put us below many other European countries, but could have a transformative impact on our social fabric.

Kruger raised the question: how? We need to find the answers and make them happen.

Tom heads up the national community land trust network and leads on its strategy and its work to mainstream the community ownership of land and affordable housing. Before joining the Network, he worked for the Greater London Authority in housing and planning policy, and as head of office for the Green Party group on the London Assembly.