Turkish Islamic-nationalism on the rise in Germany 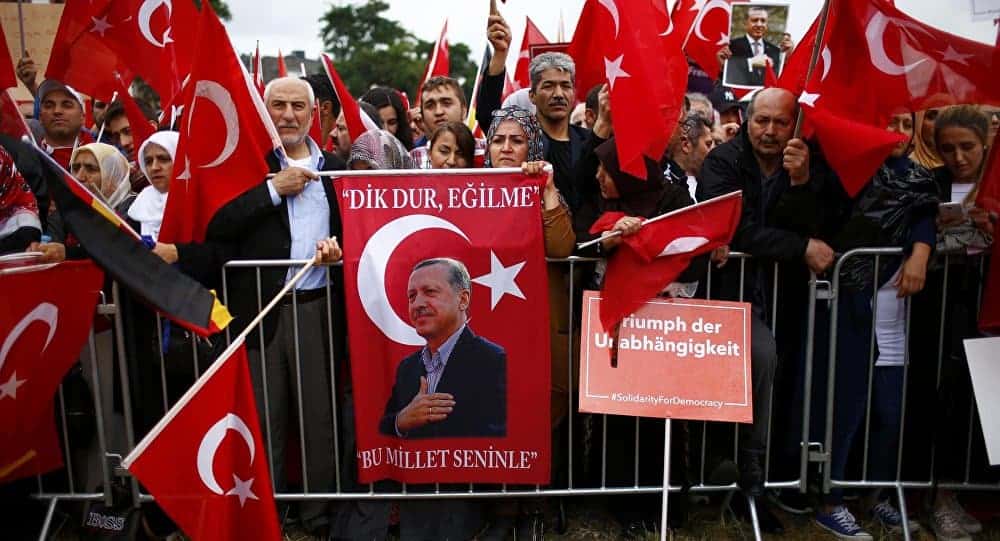 Why did the Turkish President’s visit to Germany on 28 and 29 September leave us with a diffuse feeling of unease?

There is nothing wrong with the fact that the all-powerful leader of the Middle East’s leading economy is in consultation with the Chancellor who presides over the destiny of Europe’s leading economy. The two countries maintain long-standing relations.

The climax of the relationship was the German-Ottoman secret alliance of August 2, 1914, agreed between the government of the Young Turks and that of Kaiser Wilhelm II.

After meeting on September 28 with Recep Tayyip Erdogan, a Muslim Brother preaching neo-Ottomanism, Angela Merkel did not hide the substantive differences between the two countries.

Germany is a democratic state based on the rule of law, Turkey is not. But the Chancellor rightly also emphasised the positive roles that Turkey could play in stabilizing the Levant and in managing migratory flows.

It is obvious that no political solution will be found in Syria without the participation of Turkey. Turkey was the main rallying point and provider of arms for the mostly Islamist rebels who fought the Baathist regime from 2012 to the present day, and whose defeat now seems inevitable.

It is also clear that the European Union (EU) and Turkey, bound by the Customs Union Agreement of 31 December 1995, have every interest in co-ordinating their efforts to stabilise the Eastern Mediterranean together.

In Europe, we do not taste the regimes or ideologies that prevail in the four largest powers of the Middle East: Turkey, Egypt, Iran and Saudi Arabia. They do not get along well together, but they all have historical, demographic, economic and geopolitical importance.

This justifies Germany in pursuing a proper diplomacy with each one of them. In short, it is normal and healthy for the German and Turkish leaders to see each other regularly, if only to remove misunderstandings that may exist between the administrations of the two countries.

On the other hand, there was some unease the next day, September 29, when the Turkish president, in an unprecedented security deployment, went to inaugurate the new mosque in Cologne. This immense building of contemporary architecture in concrete and glass, intended to represent the blooming of a flower, was built in the city centre by the Ditib, to house its headquarters.

This Turkish Muslim organisation, which controls over 900 places of worship in Germany, receives its orders directly from the Diyanet, the religious office of the Ankara government.

The Federal Prosecutor of Germany has launched several investigations to verify if Turkey has not used the Ditib during the last two years to spy on Erdogan’s opponents who are refugees in Germany, whether they are Gülenists (followers of a Muslim sect, which was first the ally, then the competitor and finally the enemy of Erdogan’s Islamist movement), or Kurdish nationalists.

Thousands of supporters of the new Sultan, waving the red and white Turkish flag – star and crescent moon of Islam – converged on the mosque, shouting “Who is the greatest? Turkey!”

The nationalistic gatherings of huge Turkish crowds in Istanbul or Ankara, which come to join the anti-Western provocations of Recep Erdogan, are surprising. But this is happening in Turkey. On the other hand, when this Islamo-nationalist fervour is expressed in the birthplace of the great Christian Democrat leader Konrad Adenauer, we all become a little dizzy.

We realise that the Turkish youth – whose presence in Germany goes back to the 1960s – has taken the opposite path to that of the German youth. After the defeat of 1945, it was Christianity that restored its dignity to a Germany that had been so deeply sullied by Nazism.

It is the German, Italian, Dutch and French Christian Democrats who have built a Europe of peace, exchange and prosperity. But with the rise of consumerist individualism in the late sixties, the Germans gradually dechristianised themselves and stopped reproducing. Travelling in the other direction, a large part of the Turkish youth of Germany has gone from the secularism inherited from Atatürk to Erdogan’s Islamism, while adopting the nationalism of both.

There is a growing schism between German youth and the immigrant youth of Muslim origin. One is not left with the impression that Angela Merkel really understands it.