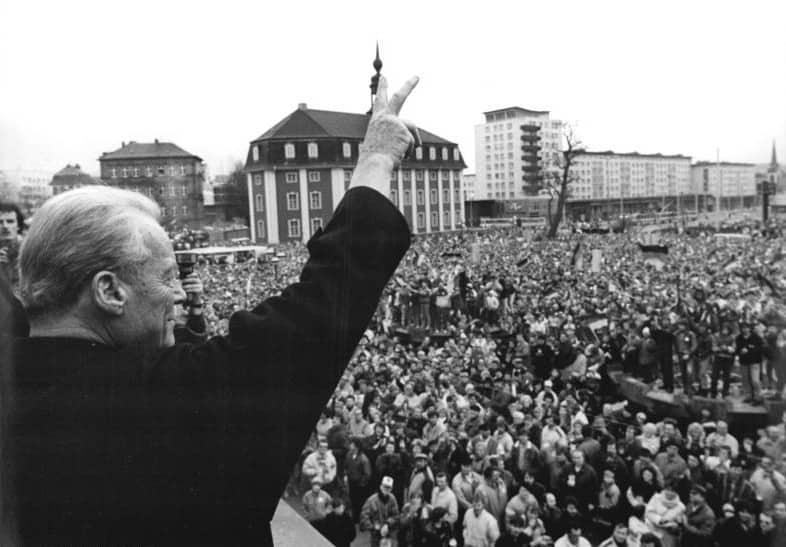 Frau Baerbock, I have to ask you, how has it been negotiating with Christian Lindner? You can’t have imagined a few months ago you would be sitting and negotiating an agreement with Herr Lindner.

Annalena Baerbock, the new Foreign Minister, thought for a moment, doubtless spotting the wicked glint in the eye of the ARD Tagesthemen presenter. How was it negotiating with the new Finance Minister, the head of the FDP, so opposed to much of what the Greens stand for? Then, she gave an intelligent, revealing answer.

It is late 1966. A former, if inactive, member of the Nazi Party is sharing a bottle of wine late into the early hours with a former communist émigré from Nazi Germany, and a diabetic who really shouldn’t be drinking wine. More unlikely companions over a bottle of wine it would be hard to imagine.

Kurt Georg Kiesinger, Minister-President of the state of Baden Wuerttemberg, an arch conservative, and the once communist firebrand, then chair of the Social Democrats, Herbert Wehner, have nothing in common and oppose each other fundamentally. And why should a diabetic old Leftie share a bottle of wine with a former Nazi?

Because Wehner’s protégé, Chancellor candidate Willy Brandt, another Nazi-era exile, cannot stand Kiesinger and it is up to Wehner to make a deal. The cabinet of Ludwig Erhard is crumbling, the Liberals have pulled out, and in the midst of their crisis, the CDU is prepared to make a pact with the SPD to form a grand coalition government until the next election in 1969.

Yes, the CDU want to stay in power, but Wehner wants SPD ministers to take roles of authority in government to show they can govern as well as oppose. Sup with the devil, and you may get the spoon in 1969.

Several nights of drinking and getting to know one another, and a deal is struck. Willy Brandt becomes Vice Chancellor and Foreign Minister. There is a famous picture of him shaking hands with his new boss, the new Federal Chancellor Kiesinger, evidently in deep discomfort. Several SPD politicians join the new cabinet. Three years later, Brandt is Chancellor in a new coalition with the Liberals. Wehner’s gamble paid off.

Frau Baerbock smiles and answers her journalist interrogator. They had promised one another they would not have night-time negotiating sessions in pursuit of a new coalition government. But over the many weeks of difficult negotiations between the FDP and the Greens, they couldn’t keep their word on that one.

And when you spend a few nights negotiating with someone, talking into the small hours, you do get to know them much better as a person.

And of course, they made a deal. And concessions. And agreed to disagree. And had another pizza or a glass of wine. And realised, though they may never be friends, they could actually get along, they could actually share a cabinet table, they might make decisions together, for the good of their own positions, their parties, and Germany.

Sometimes politics is about passion and radical positions. The art of politics is also the art of the do-able, of compromise, of realism. In Annalena Baerbock and Christian Linder, Germany has two very capable Realpolitiker.

They will have much to fight about in the coming months. But I suspect that with the odd bottle of wine and pizza, and with two top sets of civil servants to support them, they will continue to come to some agreement. Under the watchful eye of their chief sommelier, Chancellor Scholz.