The statistics behind the Covid ‘crisis’ 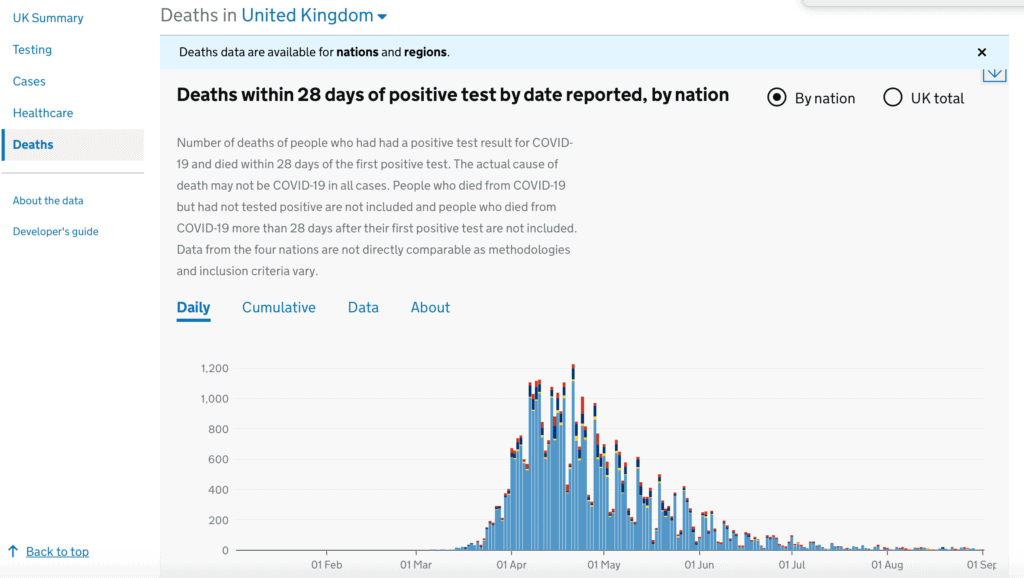 But, of course, that is not a fact.   The small print tells us that these figures only record the number of lab-confirmed positives for Covid-19.  They can be shown to be wrong in almost every respect:

The total number of people who have had a positive test for Covid to-date in the UK is 335,873 but the latest ONS survey data estimated that, by 26th July around 3.5 million people in England and Wales alone had had Covid, over ten times the number that had been detected by tests.  What the daily figures show is only a tiny proportion of the what is actually happening.

But surely at least the number of positive tests each day gives us a reasonable indication of the direction of travel?  Well not with any confidence, because when there is a local outbreak we understandably test more people in that area and the more accurately we target the testing the more positives we will record.  So the increase in the number of lab-tested positives may indicate a rising number of cases overall, but it may also just tell us that our testing strategy is working.

That, of course, is why Matt Hancock wants to massively increase the number of random tests being undertaken, but – until he does – what the real level of infection is, is really only informed guesswork.

What other clues might we have about the level of infections?

Well, intuitively (not a word I like to use when dubious statistics are involved), the co-incidence of the steady increase in the apparent levels of the virus with the lifting of a whole raft of lockdown restrictions in England, seems unlikely to be entirely coincidental.

So let’s assume that there is something real going on here and the numbers are slowly increasing – I say slowly because even taken completely at face value the weekly average is still less than double what it was in the first week in July and a mere fifth of the level at its April peak.  What, nevertheless, do we know for sure?

We know that the daily number of people being admitted to hospital with Covid has fallen very dramatically, from nearly 3,500 on 31st March.  What’s more, irrespective of the apparent increase in the overall number of cases, we know that hospital admissions have continued to decline steadily despite the lifting of lockdown, from 201 on the 6th July to just 34 on the 29th August (England only).

People who died within 28 days of a positive Covid test (but not necessarily killed by Covid) declined from 1,224 recorded on the 21st April to 53 on 7th July and to just 2 on the 31st August.   Just to put this into context, out of approximately 1,200 deaths each day in the UK, roughly 200 are the result of dementia and Alzheimer’s, 175 are caused by heart disease, 18 are suicides and 5 road traffic accidents.  Covid at the levels it has been for six weeks now just doesn’t register as a cause of death.

Around the globe – at least in developed countries where statistics may be vaguely relied upon – we see a similar trend: even where there has been a significant increase in Covid infection rates, such as the US, the number of deaths as a proportion and in absolute terms seems to be falling.

Why might this be?  There seem to be a number of reasons:

Second, we are learning how to treat Covid.   Dexamethasone has proved its efficacy as a treatment, while remdesivir also appears to help in certain circumstances.  Other drug treatments are showing encouraging results in clinical trials.

Third, the reduced number of hospitalisations has made it easier to treat those remaining patients, with doctors’ understanding of which interventions to make clearly improving.  As a consequence, a study in the US suggests a significantly increased survival rate amongst those patients needing to be put on a ventilator.

It seems unlikely that, overnight, scientists will produce a Covid silver bullet, but a cocktail of treatments (as opposed to a vaccine) – as with HIV – and new hospital protocols will almost certainly continue to reduce the severity of its threat.

Fourth, we know that 90% of Covid deaths involve co-morbidity.  After the initial wave, the number of excess deaths, week on week, in the UK has fallen not only back to, but – for the last eight weeks for which data has been published – below the average.  This could suggest that those most vulnerable to Covid died in the first wave, reducing the impact of any further increase in infections.

And finally, it is possible that the virus is simply becoming less deadly.

All these findings provide good grounds for hope, but more than that they must now inform and shape our future strategy.

Of course, we still need to be careful and to take sensible precautions to protect against another surge, but we also need the public, the media and our political leaders to get Covid back in proportion: if we are under seventy, whatever our general state of health, it is highly unlikely to kill us.

Of course, there are some heart-breaking individual stories but the measures we are continuing to take to prevent the spread of Covid are now significantly worse than the threat from the disease itself.

The Government is right in its determination to get children back to school and deserve our support in this.  The health service needs urgently to get back up to speed in its treatment of other conditions which do risk a second wave of unnecessary and totally preventable deaths.  Sports, arts and cultural venues need the green light to open in ways that make it economically viable for them to operate.

And the media needs to report much more responsibility on the level of risk from such activities and the decreasing threat.

Above all, we all need to take a deep breath and start living our lives normally again rather than permanently living in fear of our shadows.

The truth is staring us in the face.

Ben Rich is the Chief Executive of Radix, the radical centre think tank, which has written extensively on the impact of covid and exists to challenge conventional thinking.