The sad remnants of American neo-conservatism 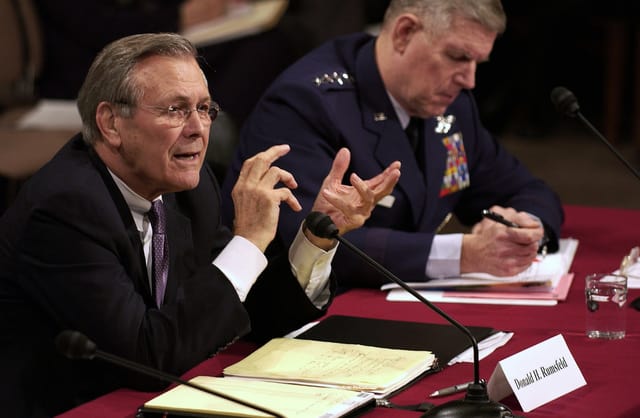 On Saturday 26 March, in the courtyard of Warsaw’s Royal Castle, Joe Biden gave a speech destined to go down in history. Reinvigorated by Ukrainian resistance in the exact opposite of the Afghan military collapse of August 2021, the American president was in Olympian form. It was as if the Russian aggression against Ukraine on 24 February 2022 had given the head of the Atlantic Alliance a second life.

Not only had Nato experienced a resurrection from its “brain-dead state”, diagnosed in November 2019 by Emmanuel Macron, but it had a leader at its head, determined to apply its Article 5 (the common defence of any member state under military attack).

Since Donald Trump cast doubt on the automatic application of Article 5 by the United States, Joe Biden seized the opportunity to distance himself from his predecessor. In a subliminal way, the Democratic president was able to reap the benefits of the very serious military preparation of the Ukrainian armies by the Pentagon since 2015.

In Afghanistan, the Americans invested heavily in an army without motivation: it surrendered without fighting. In Ukraine, they trained and equipped motivated soldiers: the result is magnificent.

To frame the presidential rostrum, the Poles had unfurled two huge American and Polish flags on the façade of the Royal Castle. The European flag was absent. In Warsaw, the European Union is perceived as a stepmother, giving lessons in morality and democracy (which we don’t want), but a lot of pocket money (which we never refuse).

America, on the other hand, is seen as the only solid sponsor capable, through its military power, of guaranteeing Poland that it will not be partitioned a fifth time.

Tragic contemporary history has taught the Poles realism. They have long understood that there is no need to take the concept of European defence seriously. They remember that in September 1939, when their country was invaded by the Germans, their allies France and England declared war on Hitler, but did not provide any concrete military assistance.

After the 1945 victory over Nazism, the Poles suffered 45 years of subjugation to Moscow. They have no desire to repeat the experience; they distrust the Russians and have only limited confidence in their European allies. But when Biden tells them that Nato will not let Russia take a single square metre of their territory, they feel reassured.

And when the American president quotes “Do not be afraid”, the cult of their greatest man, Pope John Paul II, the gravedigger of communism, they rejoice.

Biden went to visit Ukrainian refugee camps in Poland and paid tribute to the generosity of the Poles, who had been denigrated by the EU during the 2015 Middle Eastern migration crisis, for favouring hosting Christian refugees at home.

In short, Biden had done a flawless job in Poland… until the punchline of his Warsaw speech, in which he declared that Putin – whom he had already called a “butcher” – could not “remain in power”.

Suddenly, the neo-conservative doctrine of “regime change” is back. The one that presided over the “successful” replacement of three autocrats in the Arab-Muslim world, Mullah Omar in Afghanistan, Saddam Hussein in Iraq, Muammar Gaddafi in Libya. Three countries in which American bombs have left more chaos than progress.

If Biden had wanted to help the current critics of ‘American imperialism’, he could not have done it any better. For it is not for the Americans, but for the Russians, to decide who should govern in Russia.

There was a return of the neo-conservative repression in Biden. However, in the Democratic and Republican elite alike, not many people still believe in the benefits of regime change.

Many nations blame Putin for aggression against Ukraine, for stripping it of the secessionist province of Donbas. But they also remember that Nato attacked Serbia in 1999, without UN authorisation, to strip it of its breakaway province of Kosovo.

This return of neo-conservatism to the White House has two fatal consequences: it deprives America of a diplomatic role in the Russian-Ukrainian crisis and reinforces the paranoia of both Chinese and Russian leaders.

Everything now rests on the frail shoulders of the Ukrainians: armed resistance but also the fabrication of a ceasefire. In the eyes of the latest neo-conservatives, in Europe as in America, the war of “good” against “evil” is superior to everything, even to peace. A war that they want to fight to the last Ukrainian.