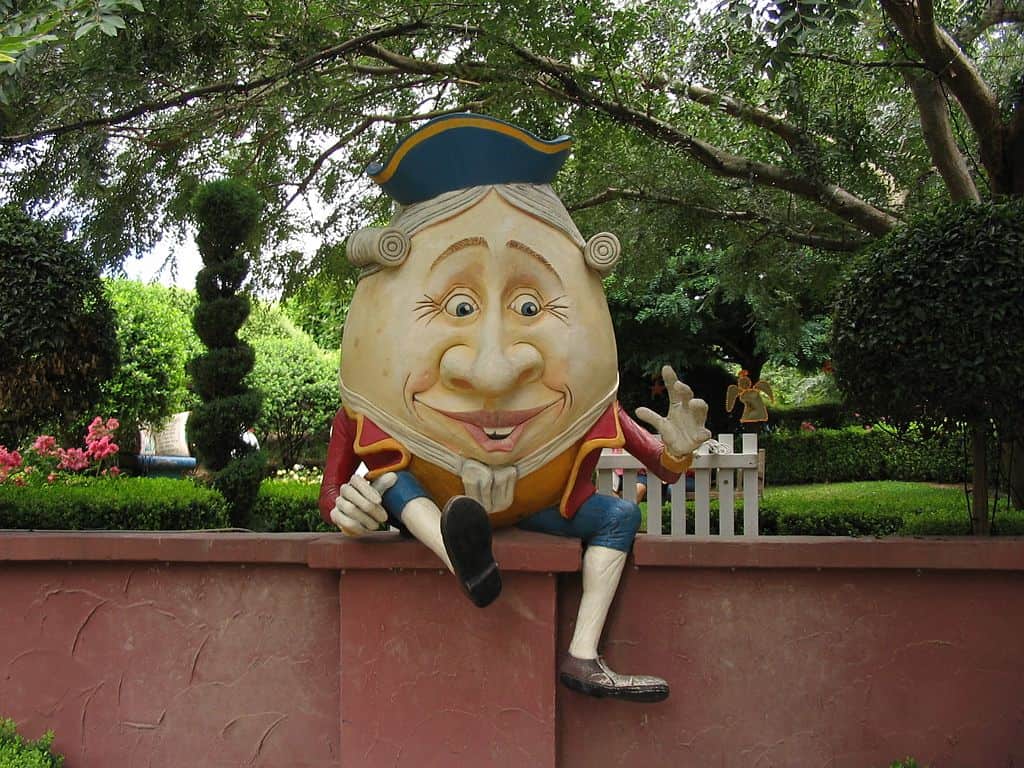 Two decades and a bit ago, my son and his friend devised a game. They rolled matchbox cars down the banister and cheered as they carrened off and hit the wall at the bend. The result was a lot of smashed matchbox cars and a series of dents in the wall from the more aerodynamic ones.

I had a good old whinge to another friend about this pointless, destructive game and the cost of repairing the pockmarked wall. ‘My girls never broke stuff for fun,’ I wailed. This friend, older and wiser and with four boys in her nest, corrected my perception. The point was not to break the cars. The point was to test the limit of the cars.

This was an observation that stayed with me along with the slightly mismatched patch of filled-in paint.

It would seem that we have been led for some time by men who have progressed no further in their development than my then four year old son and his mate. They are smashing things to see what the breaking point is. They espouse the Humpty Dumpty Doctrine.

If you’ve been following Dominic Cummings on twitter or watched his Prince Andrew-Hold My Beer interview with Emily Maitlis, you probably got some idea of his relationship to personal responsibility. That would be, none. And though convenient for my metaphor, this has nothing to do with the fact that Dom resembles an egg wearing a gilet.

Dom and his Network (if ever a follow-up question was needed….) conducted an experiment with the economic and diplomatic health of the country called Brexit. Just to see what would happen. For shits and giggles, really.

Fringe issue. Not something that anyone really cared about except for some frothy-mouthed populists without popularity who gave Cameron about as much trouble as the occasional swarm of gnats on a summer evening in Lower Chipping Snotbubble.

Why would anyone take a stable system (not flawless, but stable) that brought prosperity and peace and wreck it? Why manufacture outrage?

I could easily argue, and many a clever pollster has, that the Conservative Party was on borrowed time. It was getting very close to its expiration date and was keenly aware of what happened to the Major government when it grew a thin layer of mold. The country was growing restive about continuing austerity and Europe was an excellent distraction.

Hey, you! Yes, you! Angry your Sure Start Centre closed due to funding cuts? We have the solution to your childcare needs! Brexit! The plant where you work will be shut due to production moving to the EU and you will have SOVEREIGNTY of childcare. Angry that Eastern Europeans are taking British jobs? Try Brexit! …..TAKE BACK CONTROL and pick your own fruit while complaining in ENGLISH.

Yup. I’m still angry about Brexit and I’m not going to get over it.

I’m not going to get over it because it was all a game to Dom just like Trump was to Dom’s ugly stepsister, Bannon. They both tested the limits to see when the system would break. To paraphrase The Man Who Would Be Breakfast, it really is ludicrous that he was in charge of anything.

This isn’t just a bit of superficial damage to the Farrow and Ball. We have taken ourselves out of the room and are sniping behind a closed door. When a unified voice against rising proto fascism is most needed and the collective muscle to back it up is warranted, we’re not there.

When a common travel and vaccination policy to fight the spread of covid might have saved thousands, we’re busy slagging off the neighbours.

Humpty Dumpty did indeed have a great fall and all the King’s horses and men were in self-isolation and not testing their eyesight. So, the NHS didn’t get an extra £350 million but it did have to put everybody else back together again.

Dom’s mea culpa was a fascinating glimpse into the mind of a man who thinks he’s cleverer than everyone else. If only he’d been allowed to finish the job it wouldn’t have been the disaster it all is. If only his hand-picked idiot had been removable and Dom and his Network (Please! Might we have the names of our invisible overlords?) had chosen a less ludicrous PM, it would have all been peachy.

But this was weeks ago and things have moved on. Dominic Cummings is budgie cage liner and irrelevant to centrism, which is what you care about and why you are reading this now.

Except it hasn’t and it isn’t.

The very foundation of centrism should be competence. Without competence as the foundational principle and line one of the job description,  governments can allow any old egomaniac with a blog/syndicated reality show/twitter following to hold sway.

The US and UK have been, for the last five years, not two nations separated by a common language and a consonant but two political systems that opened themselves up to rule by con men who promised that if only they could smash everything up, it would all look better when they finished.

They call themselves radical because they wanted to do things nobody else was crazy enough to try just to see what would happen and wouldn’t personally pay for the failure. We at Radix call ourselves radical because we want to try things that others haven’t for which there is a great deal of evidence for potential success.

Congrats, Dom. You found the limits.

My son and his friend grew into nice men who don’t leave a trail of miniature axles and diecast bonnets in their wake. The dents in my wall with the slightly mismatched paint were eventually filled, smoothed and properly repainted by a nice Polish builder.