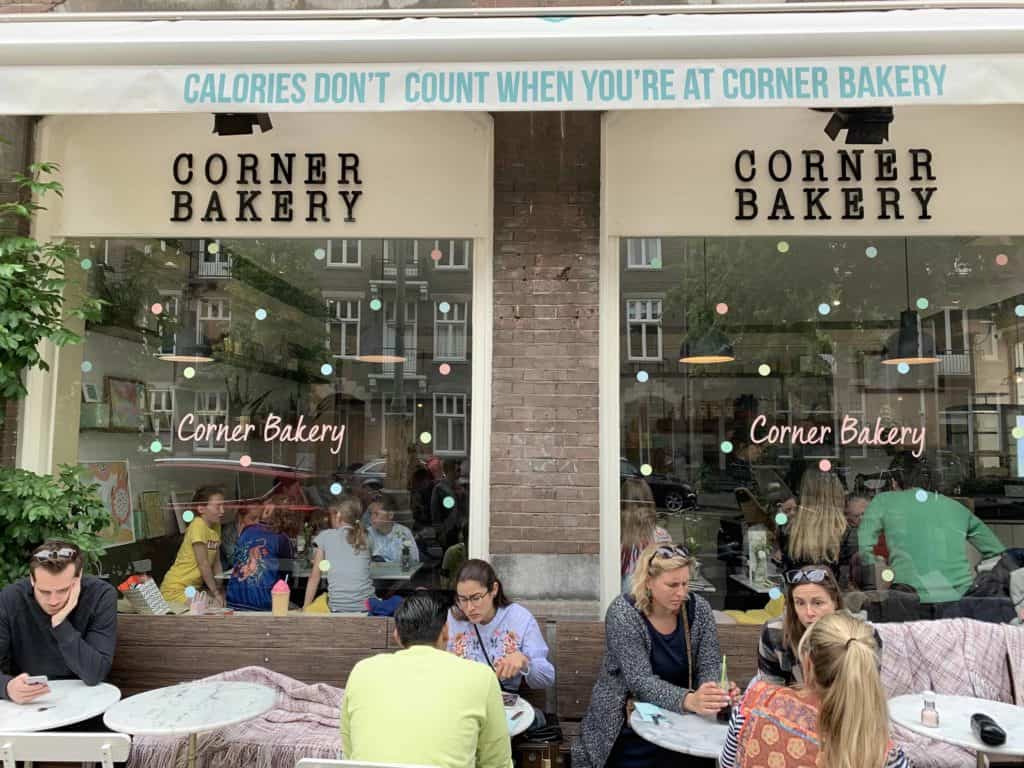 Today I went for lunch at the Corner Bakery, just opposite our home. Fortunately it had a table available, which is always touch and go.

The shop has been a tremendous success. The one opposite was the first and its success has spawned a chain of identical establishments across the city.

I often wonder why this outlet has been such a huge success. I have asked the owner and he is not sure why either.

The secret may lie in what he set out to do and the counter-cultural nature of the cafe.

It says on the awning: “Calories don’t count when you’re at the Corner Bakery”. The menu is full of what most people would consider food that is ‘bad for you’. Milkshakes come topped with a mountain of whipped cream sprinkled with surgery sweets. Pancake dishes are served with loads of syrup, cream and, if you want it, added bacon. And on it goes.

The owner felt there might be a demand for something that is not obsessed with healthy eating. Where food is once more fun. And you can see it on the face of the children as they marvel at what is put in front of them (and none of the children I have ever seen in there was obese).

Counter-cultural and fun – that may be the simple secret of its success.

We live in a world where killjoys seem to have taken over. Everything must be taken with the most absolute seriousness and with as much guilt as can possibly be laden on to any human activity.

It’s almost as though we are no longer allowed to be human – emotional beings who want to enjoy themselves as well as engage in their work and other activities.

The result: the enjoyment of travel and its benefits in learning about other cultures and bringing people together is now overlain with guilt about the carbon footprint. Any flirtatious behaviour is shrouded in the shadow of sexual harassment. Humour is dangerous because someone is bound to be offended. Dinner party conversations are tense because one never knows how the next person is going to react to any comment – possibly by bringing down the mood of the whole thing.

Food comes wrapped in health warnings. Everything one writes must go through the political correctness checker (I’m just waiting for one of those to appear in Word and billed as another triumph for AI).

The concerns underlying these developments are real and cannot be ignored. But I’m not sure the methods are sound. We should be careful about trying to improve people’s lives by making it guilt ridden and hardly worth living. Eventually, we risk that the whole thing comes crashing down as people say – enough is enough. These new guilt complexes do not rest on the promise of eternal salvation as they did in the past when guilt was a product of religious belief.

The opening this creates for reactionary political movements is very real. See them as the equivalent of Corner Bakeries to which people flock because they’ve had enough of being told that they’re just bad people and can’t be doing this, that and the other.