The debt consequences of authoritarians 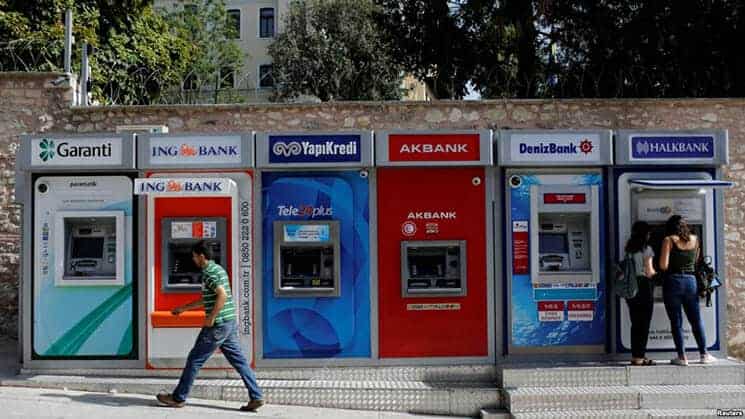 The Wall Street Journal reports ($) that Germany and France are considering offering Turkey a ‘financial lifeline.’

Well, what a surprise.

What this means, of course, is that they are considering two things: how to bail out their own banks with which Turkey now has unsustainable debt levels; and trying to find ways to prevent President Erdogan from releasing into Europe millions of refugees currently stuck in Turkey under an agreement where the EU has paid significant amounts to keep them imprisoned in Turkey.

Turkey has hundreds of billions in outstanding foreign debt, a significant proportion held by euro area banks. This is mostly denominated in euros and is therefore becoming ever less possible to service as the Turkish lira continues to sink.

Let us be clear, any monies coming from Europe to provide Turkey with a ‘financial lifeline’ will not go to help the Turkish people. It will go to sustain European banks and their continued irresponsible lending in spite of the political risks that have been obvious for all to see for some time. This is Greece all over again – only writ larger.

At the time of the Greek crisis, I was critical of the euro as a straitjacket that limited governments’ ability to act in a crisis. The Turkish crisis shows that, even while controlling their own currencies, governments are able to get themselves into deep trouble.

In a couple of short years, Turkey has transformed itself from one of the most promising emerging economies to something approaching a basket case. Overconfidence led to private and public borrowers happily to borrow in foreign currencies, allowing their lenders to shift exchange rate risk on to the borrowers. Both lenders and borrowers assumed that there was no end to the bonanza. But there always is.
It’s almost unimaginable that Erdogan’s Turkey will put up with the national humiliation, strict conditions and intrusive monitoring of the sort visited on Greece by the EU, IMF and ECB troika. It is equally unimaginable for Germany, France and other euro area governments to shell out taxpayer monies without such conditions.

It is also worth thinking about the political fallout were the EU to bail out its own banks via Turkey on conditions that were much less lenient than those offered to one of its own.

If there is a silver lining to this whole unholy mess, it’s that it might finally start shaking people’s seemingly increasing faith in authoritarianism as the way to paradise. China next?