The courage of the South Korean president 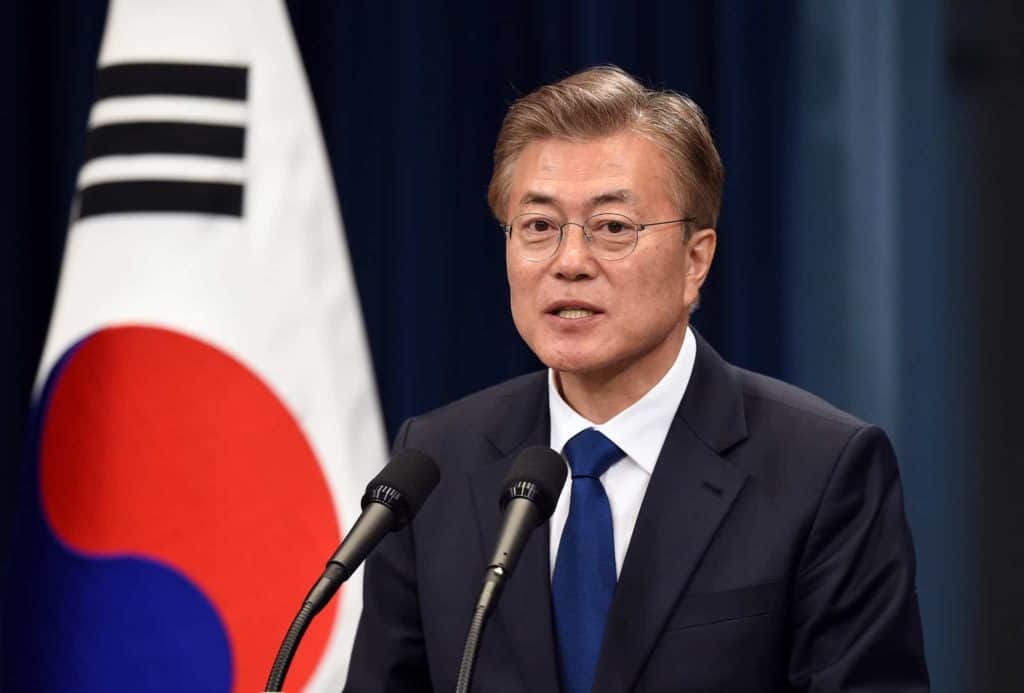 It was in France, a permanent member of the UN Security Council, that the South Korean President began, on October 13, an eight-day visit to Europe to explain his strategy of détente and reconciliation with North Korea.

It was important for Moon Jae-in to speak one-on-one with Emmanuel Macron, who until then had been rather sceptical about the chances of success of such an approach. In September, in New York, the French president had even reminded the Security Council of his duty to be rigorous in the application of sanctions against North Korea.

These sanctions were intended to bring the Stalinist regime of Pyongyang to give up its nuclear ballistic military programme which threatened not only its neighbours and US allies South Korea and Japan, but also American territory itself.

Following the arrival of Donald Trump in the White House and new North Korean nuclear and ballistic military tests, insults were exchanged, via tweets or official communiqués, between the older conservative US president and the young North Korean communist leader.

In September 2017, at the tribune of the UN General Assembly, the former had even threatened the latter to flatten his country at the slightest act hostile to US interests in Asia.

Due to the continuation of its nuclear tests, the Security Council had decided to significantly strengthen trade sanctions against North Korea. On November 27 2017, North Korea fired a long-range ballistic missile and announced that its missiles could now reach any point of the American territory. The US Navy sent an armada off the Korean peninsula.

Since the Cuban Missile Crisis of 1962, there has never been so much fear of an accidental outbreak of nuclear conflict.

Then, buried in a New Year’s martial speech, came a small gesture of appeasement on the part of Kim Jong-un. The North Korean dictator proposed to send a delegation of athletes and performers to the Olympic Winter Games in Pyeongchang, South Korea, starting on February 9, 2018.

He said he was ready to enter into a dialogue with Seoul. The genius of President Moon is to have perfectly grasped the hand that was extended.

This lawyer from a modest family who fled the communist North shortly before the war (1950-1953) and was elected to the highest office in May 2017, is a liberal and a Catholic who has never lost hope of a progressive reunification of the peninsula.

A human rights practitioner since his law student years, Moon Jae-in, now 65, has been a staunch supporter of inter-Korean dialogue. He knows that it is not sustainable to have Korean peninsula divided between an increasingly prosperous and democratic South – a model of success in Asia – and an increasingly militarized, relatively poor North, whose population continues to grow.

He understands that, sooner or later, the North Korean regime will turn into a disaster, whether it takes the form of an outside military adventure or an implosion of the country. He understood that in both cases South Korea would suffer the first and the most serious consequences.

Moon loves peace and research; he is neither pacifist nor naive. Faced with a new North Korean leader educated in Switzerland, Moon thinks that you have to give him a chance and accept the possibility that that he can be sincere.

After the Olympic truce, he sent a delegation to North Korea. It returned with two gifts from the supreme leader: a proposal to denuclearize the peninsula and an offer to meet with the US president.

On March 8 2018, to everyone’s surprise, and without warning, Donald Trump agreed. The diplomatic whirlwind could begin.

On April 27, an inter-Korean summit was held in Panmunjom and on June 12 was the Trump-Kim meeting in Singapore.

North Koreans are taking concrete action: they are dismantling a nuclear site and a ballistic site. Kim, who keeps in mind the Gaddafi precedent, will not give up his nuclear arsenal overnight without strong guarantees. Pragmatically, Moon understands this perfectly. Today, he is campaigning the West to make a gesture towards Pyongyang by easing sanctions.

He is right. For North Korea to pursue denuclearization, it must have something to gain.

In foreign policy, as General de Gaulle has shown us, it is sometimes necessary to know how to take great risks. That’s what Moon did. And for that reason he has already entered history.

North Shropshire by-election: The Lib Dems can replicate their victory by beating the Tories at conservatism