How to revive a flagging economy with ‘speed money’ 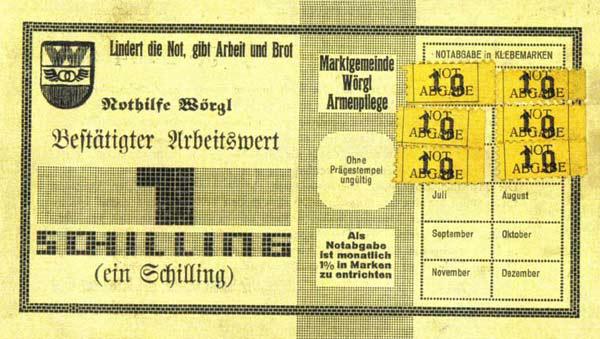 What problems might arise from tethering the value of money to an essential sustainable service of nature in each host bioregion of the planet? This basis for establishing a monetary index or tether was suggested in my article “Should money have a stable and predicable value”.

One concern of creating money on a decentralized basis is the possibility of creating too much. This concern can be overcome by only allowing the private issue of money on the condition that it becomes self-liquidating from a negative interest rate.

Such self-terminating money was privately issued in Europe and the USA during the Great Depression when it was described as “Stamp Scrip”. Unless a stamp of a specified value was fixed to the back of each note each week, the note did not become redeemable by the issuer. A typical form of Stamp Scrip required a stamp of two percent of the face value to be purchased from the issuer each week and affixed to the back of the note. The issuer undertook to redeem the note for full value at the end of year.

Over a year the income from stamp sales would become 2 per cent by 52 weeks that equalled $1.04. The issuer would make a 4 per cent profit even if the notes were given away as “helicopter” money. Surprisingly the cost to merchants would be reduced.

On 17 February 1933, Senator Bankhead and Congressman Pettingell tabled a Bill in Congress for the US government, not the Federal Reserve Bank (FED), to issue $1,000,000,000 of speed money. As the stamps would be sold by the US post office, the US government would have stimulated the economy without incurring debt or taxes and made a $40,000,000 profit after one year. Instead a New Deal was created two weeks later to keep the FED in existence and lead the US government into an ever-increasing debt trap.

Keynes thought the idea of stamp scrip sound and that its inventor, Silvio Gesell, was an “unduly neglected prophet”. Negative interest rate money stops the use of money as a store of value and so becoming an asset class competing for the allocation of real resources. It also avoids exacerbating inequality by owners of money earning interest when neither the owner nor the money is adding any value to the real economy.

Speed money is again circulating in Germany again without a financial crisis. Arguments for the government issue of helicopter speed money to manage a crisis are presented in my article: “Terminating currency options for distressed economies”.

In a crisis, speed money could be issued tethered to official money to allow both types of money to be used together. But longer-term speed money could become ecological by its value being determined by an index created automatically by the Internet of Things from a “sustainable service of nature”. Renewable energy represents a sustainable service of nature that can generate electricity. The reasons for selecting kilowatt hours of electricity generated from benign renewable sources of energy are presented in my other writings. The objectives of the index would be to:

The monetary index for each region of the world would be automatically calculated from the Internet of Things. The IoT would use at least five sets of data from each currency region on a rolling five-year average being:

A= Kwhrs consumed in the region from benign renewable energy sources.

The importance of objective (ii) is that a financial system is created that accommodates a steady state economy that can provide increasing prosperity and wellbeing, but without growth and even with de-growth. De-growth in the global population is considered by some as essential for establishing a steady state economy in perpetuity.

Shann Turnbull is principal of the International Institute for self-Governance. He holds an MBA from Harvard and published The Management of Capital in 1965 to promote modern financial analysis in Australia. He became a part-time teacher at Australia’s first business schools while being a serial entrepreneur founding many enterprises with three becoming traded on the Australian stock exchange. From 1967 to 1974 he was in charge of research for a private equity group that acquired and re-organised a dozen publicly traded companies. In 1973, his first academic paper ‘Time Limited Corporations’ was published. In 2011, Shann founded the Green Money Working Group in the UK to provide liquidity for SMEs. He is a former holder of the round Australia flying record.