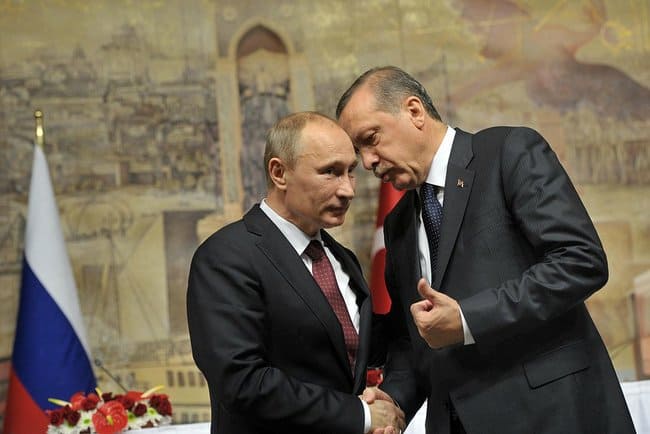 The great tsar of twenty-first century Russia, Vladimir Putin has just suffered his first strategic setback. He has lost Erdogan, his friend of five years.

On his southern flank, Putin had succeeded, since August 2016, in building an anti-Western partnership with his counterpart in authoritarianism, the neo-Ottoman sultan, enshrined in the delivery to the Turkish army of S-400 surface-to-air missiles, the ultimate in flak. Russia and Turkey were two democracies that were determined to jointly ignore the human rights injunctions issued against them by the West.

They had divided Libya into two zones of influence, Tripolitania for Turkey, Cyrenaica for Russia. Together with Iran, they had built the Astana axis, to settle the Syrian question between the three of them. Understanding the anti-Kurdish nationalist game of the Turkish president, Putin had let him install his army in the Kurdish cantons of northern Syria. When the Basilica of Saint Sophia was turned from a museum into a mosque by Erdogan’s decree, the master of the Kremlin kept his mouth shut, even though he believes in his heart that Holy Russia historically embodies the third Rome.

But now Putin has been brutally dropped by his friend Erdogan. On April 10, the all-powerful Turkish president warmly received Putin’s current worst enemy, Ukrainian president Zelensky, in Istanbul and agreed to sell him new Bayraktar TB-2 drones (which worked wonders against the Armenians in Nagorno-Karabakh in the autumn of 2020 and against the Russian mercenaries of the Wagner Division in the spring of 2020 in Libya).

The two countries have even decided that they will now build drones together (remember that the famous Antonov planes of the Soviet era were built in Kiev).

On the occasion of this Turkish-Ukrainian summit, the neo-Ottoman sultan denounced Russia’s “occupation” of Crimea since 2014. Erdogan recalled that before its conquest by Catherine the Great, the peninsula had been a province of the Ottoman Empire for more than two centuries, under the name of Crimean Khanate. Keen to extend his grip on the Black Sea, he would prefer a Crimea governed by the weak Ukraine than by the powerful Russia. Between comrades in authoritarianism, we do not do each other any favours…

Erdogan is playing it very well, because he is killing two birds with one stone. He shows the world his independence and the strength of his arms industry; he reconciles with NATO and gets closer to the United States. The Turkish president knows that his already weakened economy could not afford to be sanctioned by the US Treasury.
Erdogan leaves US sanctions to his ex-friend Putin.

On 15 April 2021, Joe Biden signed an executive order prohibiting American financial institutions from buying Russian government bonds or shares of the Russian Sovereign Wealth Fund directly in Russia from 14 June. The White House executive order was issued to punish Russia for its recent cyber attacks, including the hacking of SolarWinds (a Texas-based, Wall Street-listed company that is a leading developer of computer management software and remote surveillance tools, some of which are used by major US federal agencies). European banks are so terrified of the US Treasury that they will probably give up buying Russian paper on their own. Internationally, this leaves Russian finance in an uncomfortable head-to-head with Chinese finance.

By militarily supporting Ukraine, the darling of the West, Erdogan is suddenly a good guy in the eyes of the new US administration. Conveniently, he lets Putin’s Russia play the role of the bad guy, persecuting the opponent Navalny, and hit with new evidence incriminating it in the explosion of a Czech ammunition depot in 2014 (perpetrated by the same two GRU agents who would go four years later to Salisbury to poison the “traitor” Skripal with Novitchok). The Russians suspected that this depot was delivering ammunition to the Ukrainian army.

How will Russia avenge Erdogan’s “betrayal”? Not sending him any more tourists will not be enough to make up for the affront. Will it resume its support for the neo-communist Kurds of the PKK? At the same time, will it join the Israel-Greece-Cyprus axis that is fighting against Turkish maritime expansionism in the eastern Mediterranean? On 18 April 2021, Israel and Greece, both objects of the Sultan’s hatred, signed a 22-year military co-operation agreement.

Rooted in history and geography, the old Russian-Turkish strategic competition has resumed. It is not ready to end.