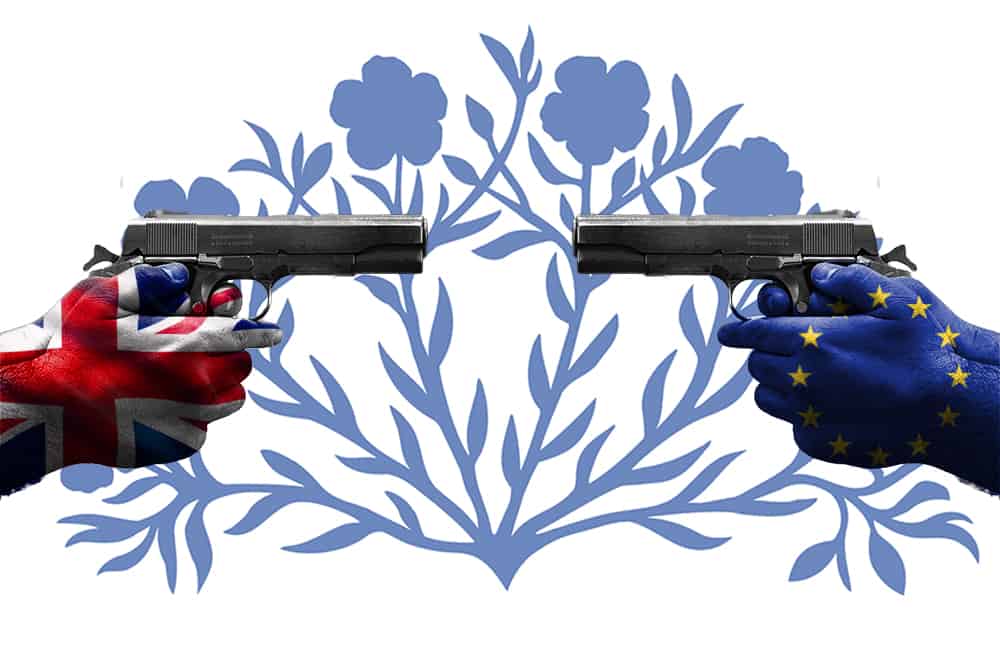 Why is anyone surprised?

A battle has broken out between the EU and the UK government around the implementation of the Northern Ireland protocol. It is time to cut through the posturing on both sides and face reality.

Actually, there are two realities we must all face. The first is that the Good Friday Agreement (GFA) was all about identity. Just like today’s debate about trade is merely a proxy for identity. The second is that there is no clean and perfect way to sort out the issues. If there were, then it would already have been found in years of painstaking negotiations. Something must give if any kind of peace is to be preserved in Northern Ireland.

It should not need to be said yet again that there are two communities in Northern Ireland – a unionist one and a republican one. The GFA allowed each community to feel that their own identity was being preserved. Seamless trading (and movement of people) both with Great Britain and with the Republic of Ireland combined with power sharing to allow each community to feel that their identity had been preserved. The republican community could feel Irish, the unionist community could feel British.  Consent by both communities for any changes was an integral part of the GFA.

Brexit has shattered that arrangement. It was a Humpty Dumpty moment. It can’t be put together again if everyone insists on perfection.

All of that has been obvious from the start.

Why is it, then, that both the UK and the EU signed up to the Northern Ireland protocol when it was obvious that, as written, it infringed the identity of the unionist community and could never command bi-partisan support?

One explanation is that the UK government signed the protocol cynically. It knew full well that it would never hold and would have to be either revised or completely abandoned. But, given his personality, Boris Johnson might well have judged that to be a problem for another day.

What of the EU? Either EU negotiators were foolish, failing to understand Northern Ireland. One can only hope that is unlikely. Or they, too, knew that it would never hold and, just as cynically, believed that it could later be used to bring the whole of the UK back into the EU’s regulatory orbit and under the jurisdiction of the European Court of Justice – a belief in which they might have been encouraged by Theresa May’s negotiating stance.

But we now know that such a dynamic alignment is just not going to happen. And we need not re-hash the debate, now obsolete, pointless and increasingly tedious, as to whether Brexit was a good idea or a terrible one. What’s done is done. I say that as a Remain voter.

The reality is that peace in Northern Ireland can only be preserved if both communities once again feel that their identity is being respected and preserved. This cannot happen if there are regulatory borders either with the Republic or with the rest of the UK. Neither does it matter if such borders are digitised, seamless and, for all intents and purposes, practically invisible. In terms of identity, those borders will still loom large in the hearts and souls of Northern Ireland’s communities.

The UK government was plain wrong – and may have well known it – at the time the original agreement was signed to claim that gee-whizz, shiny, currently non-existent technology could provide an answer. Technology can never solve political issues. Just like Northern Ireland’s business community is wrong today in claiming that these are purely technical issues and that politics should be kept out of it. A bizarre position to take.

None of us, including President Biden, should be in any doubt. The Northern Ireland protocol as it currently stands violates the GFA. Anyone who claims otherwise, and there are many who are doing just that, is either ill-informed or being disingenuous if not outright dishonest.

Current robust statements from President Macron and other EU leaders about the inviolability of the protocol ring hollow. Let us not forget that Ms von der Leyen showed herself willing to invoke Article 16 and unilaterally suspend the protocol over Covid-19 vaccines before beating a hasty retreat.

So, where do we go from here?

The UK government would be well within its legal rights to invoke Article 16 and suspend the protocol. Indeed, it has suggested it might do just that. That would replace the border down the Irish sea with a border between Northern Ireland and the Republic. It would solve nothing. Simply transfer the ire from one community to the other. Just because an action is legal doesn’t make it wise.

Another ‘solution’ is to abandon the Great Britain/Northern Ireland border altogether reverting to the pre-Brexit arrangements. That such an approach would allow leakage into the Great Britain of EU goods that may not be in line with UK regulation might be acceptable to the UK government. But movement of goods in the other direction does not seem currently to be acceptable to the EU.

The compromise approach is, as always, imperfect. Remove barriers to goods flowing from Great Britain to Northern Ireland only if they are intended for consumption within Northern Ireland but not for re-export across the Irish border.

The EU currently opposes such an arrangement on the grounds of potential leakage. True, leakage is likely. The scale of such leakage is unknowable, but a reasonable starting assumption is that it might not be large enough to undermine the whole integrity of the single market. After all, leakage of non-compliant goods into the EU single market from other parts of the world already occurs through many of the major European ports where, despite the thin veneer enshrined in law, it is simply impractical to check and recheck every item arriving from the world over.

If it were, there would, for example, not be vast amounts of cocaine flowing into the EU from producer countries. Yet, despite such (probably fairly substantial) leakage, the single market has not fallen apart as a result. The idea that some leakage across the Irish border would do just that is laughable.

The only available choices are clear. Agree an imperfect political compromise now and move forward. Wait until 2024 when the protocol will certainly be turned down by the unionist community when it becomes subject to political consent in Northern Ireland. Or have both sides dig their heels in and achieve nothing.

The last option might result in Northern Ireland tragically descending once again into sectarian violence well before 2024. If that were to happen, politicians on either side pointing fingers at each other as to where the blame lies will do nothing for what would be a rising toll of victims and their families. Such a catastrophic outcome would leave our current crop of so-called political leaders with only one option – to hang their heads in eternal collective shame – whichever side they stand on.