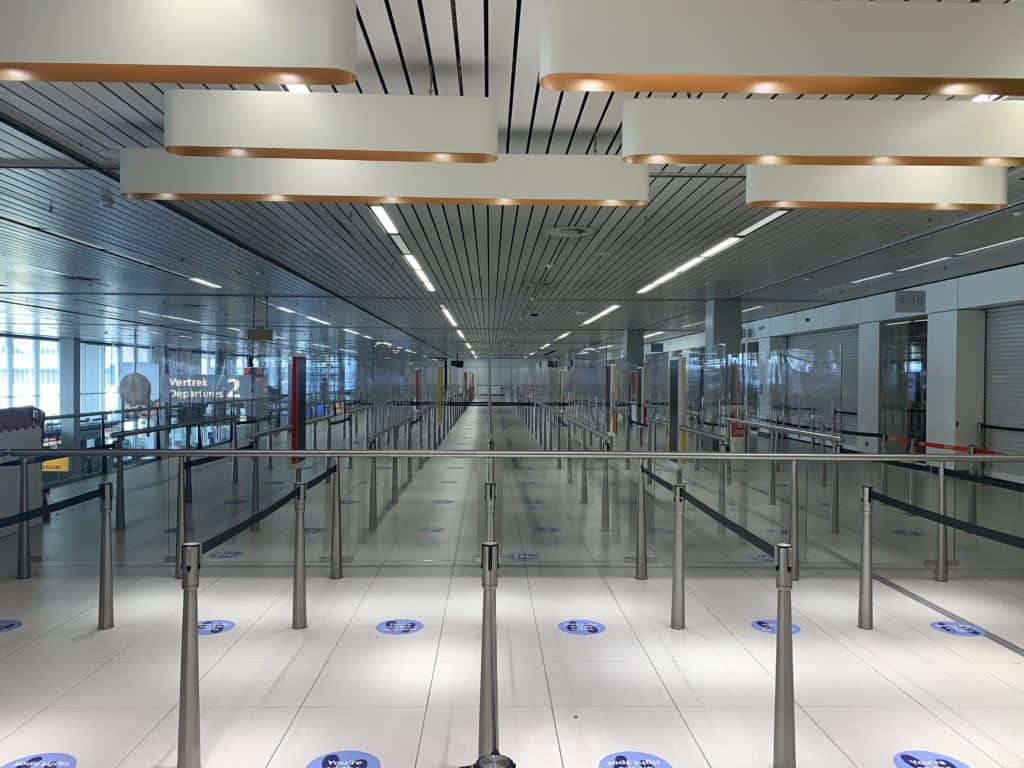 This week, for reasons I won’t go into, I have had to travel to the US. I have to say that I did so with some trepidation.

If the newspapers were to be believed, the country was overrun by the covid plague. Following Trump’s lead, few were taking any kind of precautions. The  numbers were soaring and a cavalier attitude was everywhere. Traveling to the US was a bit like deciding to plunge straight into the Black Death.

I left from Amsterdam where the airport was practically empty. The image above shows the ‘queue’ for the security checks.

My first leg was to Atlanta and we landed at the international terminal which was also practically deserted (only US citizens and permanent residents are currently allowed into the US). A quick transfer to the domestic terminal for my next leg and there were people. Not anywhere near as busy as on a normal day, but a fair bustle.

All through this, signs and guidance were everywhere. One could not walk more than a few yards without a hand disinfectant in sight. And everyone – yes everyone – was wearing masks. The immigration officials’ booths were wrapped in plastic sheeting. Only alternate seats in the airport could be occupied.

The little bus that took us between terminals had a limit on the number of passengers it would carry. People from the same group were allowed to sit together. Lone travelers like me had to sit with an empty seat next to us.

I arrived late at night. I made it to the car rental counter where I had booked a car at five minute past midnight. The lady at the counter was still there and had only just finished serving another customer. She told me that she couldn’t serve me because they closed at midnight and it was past that.

Clearly she hadn’t had the memo that the travel industry was in a crisis and could do with any revenue they could get. I walked to the next car rental company and got a car.

On arrival at my destination, the precautions being taken, the placards and guidance for what to do and how to behave were everywhere. Restaurants had tables spaced apart and several other precautions. The parmesan cheese for my spaghetti came in a small sealed container rather than the usual open bowl from which you sprinkled it on to your plate. The lifts in the building would only allow one person in the cabin or one single family group in at a time. That made for some longish waits but it was clearly safer.

And everyone seemed to be following the rules meticulously – much more so that I have observed in the Netherlands and in the couple of European countries that I have visited recently. Americans are obsessively health conscious at the best of times and they are clearly taking this seriously. And doubtless nobody wants to be sued for not following the rules and spreading infection.

Speaking to some friends, they say that testing is widely available. Anyone who wants it can get tested the same day, locally – at a cost.

Which all made me wonder. What planet are the media living in? What sort of nonsense are they feeding us in what seems to be a preference for sensationalism over reality? President Trump’s own reported behaviour (and now I start to wonder whether it’s real) clearly has not translated to general population behaviour. Everyone I met showed responsible behaviour including social distancing, mask wearing and endless repeated use of hand disinfectant.

Throughout this pandemic, the media have not been stellar. They seem to have created more heat than light about what is going on anywhere. The experience of traveling to the US has not been anywhere like what I had been expecting from the media reports. I feel safer here than in Europe. And I now treat all media reports with the scepticism that, apparently, they deserve.

When all of this is over, many enquiries will doubtless be mounted. I suggest that one of them should be an examination of the role of the media and whether they have done more harm than good.