New kinds of money are poised to sweep the world 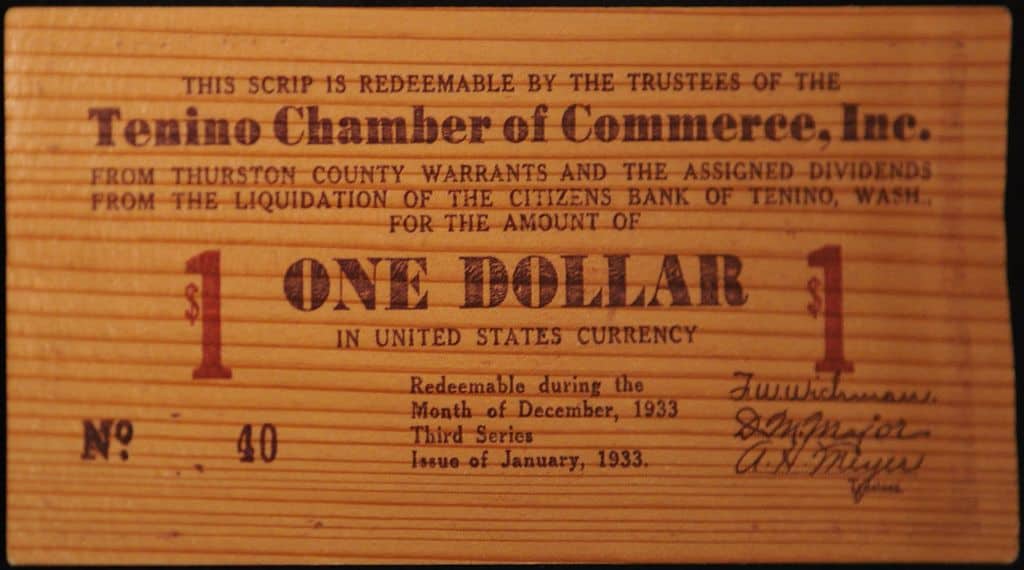 Charles Zylstra was the man who first introduced Stamp Scrip – the negative interest local currency – to the USA around 1932/3. He used to tell this story:

“A travelling salesman stopped at a hotel and handed the clerk a hundred dollar bill to be put in the safe, saying he would call for it in twenty-four hours. The clerk, whose name was A, owed $100 to B and clandestinely he used this bill for the liquidation of his debt, thinking that before the expiration of 24 hours he could collect $100 from his own debtor, whose name was Z. So this 100 dollar bill went to B, who, greatly surprised, used it to pay his own 100 dollar debt to one C, who (equally surprised) . . . and so on, and so on, all the way down to Z, who, with much pleasure, returned the bill to A, the clerk, who, in the morning, restored it to the salesman. And then did A, the clerk, stand petrified with horror to see the salesman light a cigar with it. ‘Counterfeit,’ said the salesman, ‘a fake gift from a crazy friend, Abner; but he didn’t put it over, did he?’”

“Let us now look at the collective result,” wrote the economist Irving Fisher, whose book this story was in. “At the end of the year, the town has a new street, paid for with scrip which (through the stamps) was paid for by the citizens who used the scrip – and will use the street too.

“The scrip cost the citizens perhaps one third of 1 per cent on mostly new business, while the street cost the city (in the sense of the city treasury) nothing at all. But, of course, the city is the citizens; so that these various statements boil down to this: The citizens have bought a new street out of a self imposed tax on mostly new business, and it was a tax less heavy and more spread out than any other tax they ever paid.

“The chief objection to Stamp Scrip which I have thus far encountered is that it will not work because people will refuse it – it will not catch hold. But the man who said this, said later, ‘I guess I must be like the Englishman a hundred years ago, who said that the steam-locomotive couldn’t work because smooth wheels could not catch on to smooth rails. While he was saying this in London, Stephenson was successfully running his locomotive in Scotland’.”

The fact that an economist of the calibre and reputation of Fisher could intervene with a book called Stamp Scrip was partly a measure of the depth of the Great Depression and partly related to the importance of the great alternative to Roosevelt’s new deal.

Stamp Scrip was an idea that began in Austria, and reached the USA at the moment when so many communities were running out of cash. So many places were issuing their own notes, which required you to buy a stamp representing one per cent of its value every month – if you failed to spend it on. This was negative interest money, after all.

Senator Bankhead, the uncle of Tallulah, managed to get a bill drafted in Congress which would have authorised $1 billion of stamp scrip to be issued the following year. The Bankhead-Pettengill bill was introduced in February 1933.

But when Roosevelt was unaugurated as president in March 1933, a month later, a quarter of US banks had shut their doors, and he believed that stamp scrip was undermining belief in the banks and were therefore part of the problem.

When I used to kcture on these two decades ago, having written Funny Money about their experimental successors, I used to emphasise the wooden currency of Tenino in Washington state as particularly unusual.

Every time, we have run short of money again, experimental DIY currencies come back, from Ithaca hours in 1992 to the Bristol pound in 2012. But we have experienced nothing on the same scale as stamp scrip.

But amazingly, Tenino’s wooden currency is back. It convinces me that – this time – as the money begins to dwindle around the world, we will know how to create the money we need to live,