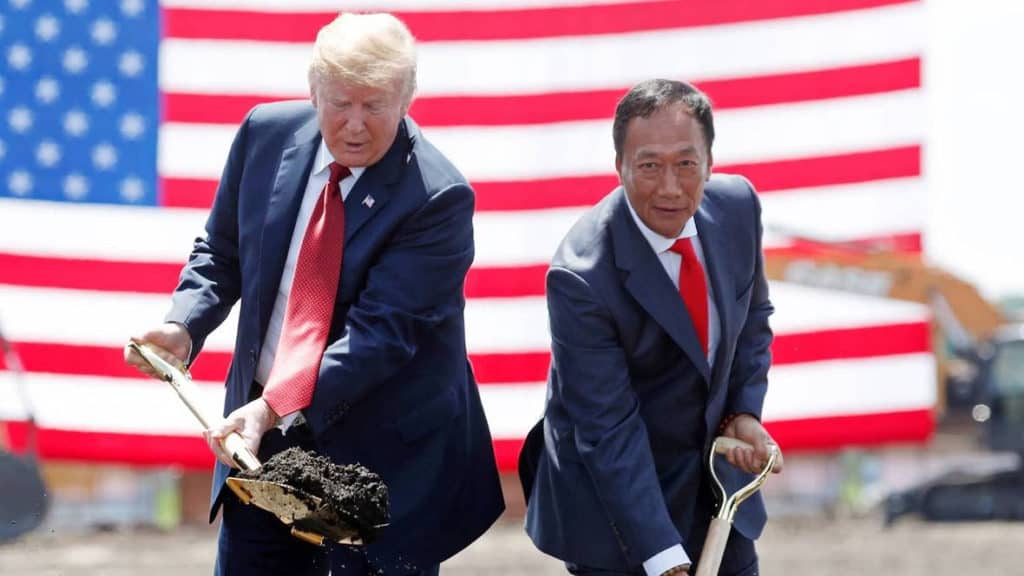 As we deliberate over our ballot decisions today, one choice should be easy: Ask whether any candidate favors giving away taxpayer money to attract global companies. If the answer is “yes” – even a squishy conditional “yes” – throw the bum out.

I have no clue where Vice President Joe Biden stands on this question, but there’s no question about President Donald Trump’s commitment to the smoke and mirrors of economic attraction. Eighteen months ago he proudly announced that thanks to his dealmaking skills, the Taiwan-based Foxconn, a key supplier for Apple products, would open a gigantic manufacturing facility near Milwaukee.

He pronounced the planned LCD factory “the eighth wonder of the world.”

“This is a great day for American workers,” the President boasted, “and for everyone who believes in the concept, and the label, Made in the USA.”

Behind the scenes, then Governor Wisconsin Republican Scott Walker and State Assembly Leader Robin Vos had engineered $3 billion in tax credits for Foxconn, based on the promise of 13,000 jobs by 2032. That works out to $230,000 per job.

On top of this, the small town of Mount Pleasant (population 26,197) and other jurisdictions borrowed hundreds of millions of dollars to pay for the infrastructure for the planned 20 million-square-foot LCD complex.

Today, according to a devastating piece published by The Verge, the project is all but dead. The company has built a tiny structure 1/20th the size of the factory promised, and has applied to designate the intended business, not as “manufacturing,” but as “storage”.

By the end of 2019, Foxconn had employed only 281 people—most of whom were temps, without clear assignments, hired just to crack open a tranche of state subsidies. It may take decades of litigation for Wisconsin and Mount Pleasant to recoup a tiny fraction of the money they already spent.

Lots of research has been conducted on the efficacy – or rather inefficacy – of corporate attraction as an economic development strategy over the past forty years, and here’s what we know:

(1) MOST COMMUNITIES GET NOTHING – In any given year, many thousands of cities and counties are chasing a few hundred companies. Do the math. Most players come up empty-handed. If you insist your economic-development department staff play this game, chances are good you will have no economic development to show for it.

(2) EVEN THE WINNERS LOSE – The evidence is overwhelming that most of the winning deals fail to live up to their promised jobs, infrastructure, and community benefits. Not all fail as spectacularly as Foxconn’s, but many do. Consider the most famous attraction effort two years ago, when Amazon gathered bids for its HQ2 headquarters from hundreds of cities, and ultimate decided to split the prize in half. (New York City, one of the two “winners,” then wisely bowed out).

(3) THE GAME IS UNFAIR – Global companies hire corporate attraction agents who specialize in pitting communities against one another. They are paid on commission based on the size of the local giveaway, so it’s in their interests to maximize subsidies, not the benefits to the winning community.

(4) LOSERS ABOUND – Local businesses lose, because the government is subsidising their non-local competitors. Taxpayers lose, because they are footing the bill for benefits they are unlikely to receive. And democracy loses, because the details of these shady deals are negotiated in secret, short-circuiting the normal vetting process with voters. Listen to this podcast by “Reply All” on how the back-room negotiations of the Foxconn deal tore apart Mount Pleasant, especially as its gullible politicians mortgaged the community’s future and condemned neighborhoods to make way for factory bulldozers.

(5) REAL ECONOMIC DEVELOPMENT IS NEGLECTED – When I spoke last week to a group of economic developers in North Carolina, several insisted they needed to continue these practices for their communities to remain “globally competitive”. Yet there is no evidence that global companies generate more innovation than local companies. In fact, smaller companies generate significantly more patents per dollar of business. Moreover, as I have pointed out repeatedly here, we also know from dozens of studies that locally owned businesses generate 2-4 times the number of multiplier jobs, wages, and taxes as non-local ones. Every dollar or hour spent chasing a non-local company neglects the greater opportunities for innovation in your existing companies.

(6) LOCAL ECONOMIC DEVELOPMENT IS MORE COST EFFECTIVE – Many commentators suggest fixing these deals with better initial contracts, “clawbacks” for non-performance, and stronger promises of “community benefits.” These are silly solutions, because it’s the underlying “deal” that’s irrational. You cannot put lipstick on a pig. As I point out in my book, The Local Economy Solution, many local economic development initiatives, such as entrepreneurship programs, deliver good jobs for $1-2,000. Some of these programs, like ZingTrain in Ann Arbor, Michigan, actually make money.—These reasons underscore why nearly all economists now counsel communities to dump their corporate attraction programmes. The only reason these programmes persist is, not economics, but politics. Politicians who score a 1,000-job deal are celebrated in the press, while those who convince 500 small businesses to each create two jobs are ignored.

Michael Shuman is an attorney and economist from Maryland, and author of five books on local economies, including most recently Put Your Money Where Your Life Is.   He is the publisher of Main Street Journal on substack.