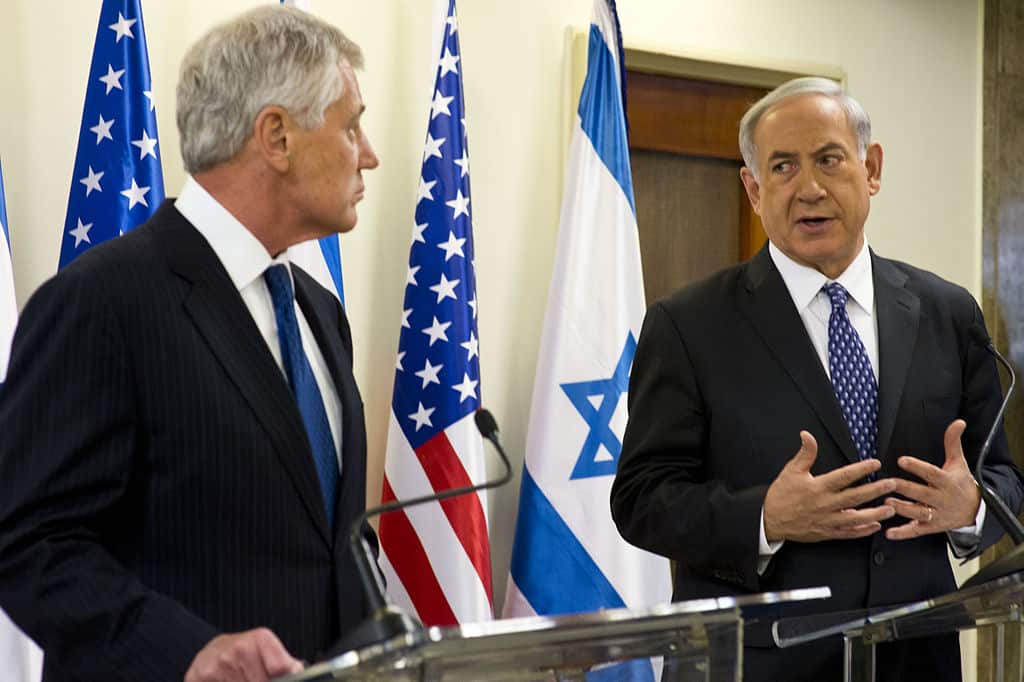 Eight months ago, Benjamin Netanyahu, Prime Minister of Israel, achieved a brilliant strategic success. He signed, in Washington, the Abraham agreements with the United Arab Emirates, instituting an exchange of embassies and commercial cooperation between the Jewish state and this large Arab petro-monarchy of the Persian Gulf. “I think we will soon see other Arab countries join this growing circle of peace,” said the Israeli leader, who holds the record for longevity at the head of Israel since the creation of the state in 1948.

In December 2020, he succeeded in normalising Israel’s relations with Morocco, the oldest country in the Arab world.
Earlier, in May 2018, Netanyahu had obtained from the United States the transfer of its embassy from Tel Aviv to Jerusalem. To the holy city of the three monotheistic religions, UN Resolution 181 (on the partition of Palestine from the British mandate) had conferred a status of corpus separatum under international supervision (which was never applied, due to the 1948 Arab-Israeli war, won by the young Jewish state).

Donald Trump, a personal friend of Benjamin Netanyahu, had offered the Israeli Prime Minister a harvest of international successes. The mistake of the Likud leader was not to show magnanimity towards the great losers of these Abrahamic agreements, the Palestinians, who were obliged to note that the former sacred front of the Arabs in their favour was constantly withering away.

Instead of being generous, instead of freezing the settlements in the West Bank and East Jerusalem in order to relaunch the Israeli-Palestinian dialogue, Netanyahu continued his policy of nibbling. It was partly this policy that set off the fire, at the end of April 2021, in the Sheikh Jarrah neighbourhood of East Jerusalem, where Palestinian families, settled there for seventy years, are threatened with expulsion, to the benefit of hyper-nationalist Jewish settlers.

The more the settlements – which are contrary to the Geneva Convention, to which Israel is a signatory – continue, the more the chances of creating a viable Palestinian state, as envisaged by the Oslo Accords signed by Yitzhak Rabin and Yasser Arafat in September 1993, are diminishing. This is tragic for the Palestinians, but it is also tragic for the Israelis. For the latter will not be able to maintain forever their apartheid and Bantustan regime in the Arab West Bank which they have occupied since their military victory in June 1967.

Israel, a democratic, moral state, cherished by the West, cannot afford to expel Palestinians from their ancestral homes to Jordan today. In the medium term, therefore, it is exposed to the danger of an Arab demographic bomb, made up of the Israeli Arabs (soon to be two million souls) and the Arabs of the occupied West Bank (more than two and a half million people).

Without the creation of a viable Palestinian state, Israel will have no choice but to become a bi-national state. It will soon no longer be the Jewish state dreamed of by Theodore Herzl. It is curious that a man as intelligent as Netanyahu cannot understand this arithmetical reality.

But, in the short term, there is another danger that threatens Israel, one that is far more serious than the very inaccurate rockets that Hamas cruelly throws at Israeli civilian neighbourhoods. It is the danger that the Jewish state, because of excessive reprisals, will lose the sympathy of the Western states and that the BDS (boycott, divestment, sanctions) campaigns will take hold in their public opinion.

In the past, in the 1950s and 1960s, Israel was a boy scout state, admired by the whole world. The occupation of non-Israeli territories after 1967 gradually created a spiral of misunderstanding-oppression-resistance-repression, which ended with the stone intifada, which began in December 1987, when teenagers threw stones at armoured vehicles. Israel then lost its prestige.

But it regained it when its leader Rabin was generous to Arafat, agreeing to shake his hand on the White House lawn. Hamas’ terrorist attacks and Netanyahu’s unwillingness to do so undermined these fine Oslo agreements in the late 1990s. In July 2000, at Camp David, Arafat was wrong to refuse a very generous offer from Prime Minister Ehud Barak. Shortly afterwards, the Kalashnikov Intifada broke out, a tragic mistake for the Palestinians, for which they will pay for a long time.

Netanyahu was ungenerous with the Palestinians in order to gain the sympathy of the Israeli far right, which he needed to stay in power. But the true statesman is the one who knows how to sacrifice his career to the higher interests of his nation.