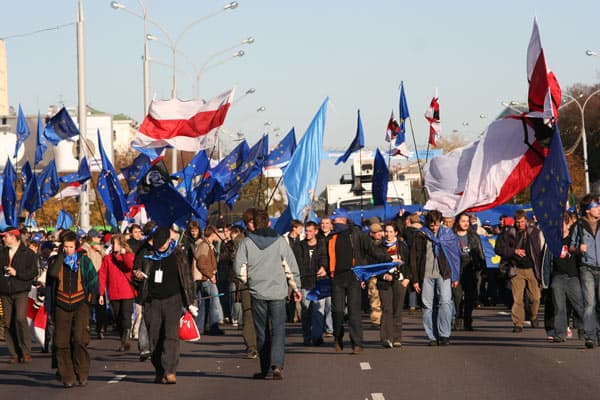 Why are the images of Middle Eastern migrants trying to force their way into Poland from Belarus so disturbing to us? Are they indicative of a triple impotence of the European Union (EU)?

First, no one seems to respect EU regulations on non-European immigration. Regulations that provide for strict procedures for labour immigration, or for obtaining political refugee status. It is as if European law has a natural vocation to be trampled on. Sturdy young men can be seen attacking Polish border fences with shears and pickaxes with impunity.

Since Angela Merkel’s unilateral decision to open Germany’s borders wide in September 2015 – only to close them again a month later – resourceful young men with a good network of smugglers have claimed the right to settle in the European Union. Nowhere else in the world is there such a lax border and such tolerance of criminal human trafficking networks.

In North Africa and the Sahel, these networks are also involved in drug trafficking. They finance jihadist movements there. They have become masters in the art of soliciting the help of NGOs in the Mediterranean, which have become the useful idiots of human trafficking.

Second, the EU is the only organisation in the world that is so openly blackmailed by states. In February 2020, Erdogan’s Turkey, angered by the West’s lack of support after the loss of 33 of its soldiers in Syria, and eager to get more money from the EU, made good on its threat to open the floodgates to migration.

Since the summer of 2021, we have seen Lukashenko’s Belarus show incredible leniency to human trafficking rings, which had identified his country as an ideal base for illegal immigration to the EU. Belarusian police officers even led some Middle Eastern migrants to the Polish border.

The Belarusian dictator could very well have stopped the flow of young Middle Eastern men to his country as early as August 2021, when the traffickers’ scheme had become clear. He did not do so in order to blackmail the EU into recognising his regime – one born out of dubious elections.

The 27 EU countries were right to refuse to be blackmailed and to brandish sanctions against the airlines that would continue to engage in this traffic. Fearing further sanctions, Lukashenko changed his attitude on 15 November . He pledged that his administration would persuade the migrants to return home, while pretending to be surprised by their reluctance.

Finally, the EU is showing its institutional impotence. In six years, it has failed to come up with a common and effective response to the migrant problem. The German Chancellor’s solitary decision has created a tremendous draught. Tens and tens of millions of Africans and Middle Easterners now dream of coming to the prosperous and generous EU. But the EU has neither the economic means, nor the cultural disposition, nor the political will to welcome them.

Faced with this reality, the ball of the hypocrites is underway. European leaders wrap themselves in their good feelings but rely on neighbouring countries to do the dirty work of turning back the migrants. Democracy in the EU does not extend to asking its citizens whether they want to live in a multi-ethnic society.

The President of the European Commission dared to declare that the EU “cannot finance walls and barbed wire in Poland”, but she does not propose any viable solution to the problem of illegal immigration.

The EU has still not managed to tell the world how many migrants it is willing to accept. Does it want to limit itself to genuine political refugees, persecuted in their countries for promoting European values? Does it want to extend its welcome? To whom? To economic refugees? At what rate? Under what conditions?

Borders are a serious political issue. If the EU does not deal with it very quickly and once and for all, it is on the verge of breaking up. France, which will take over the EU presidency on 1 January, has its work cut out for it.