Love in a time of corona – should we get hitched online? 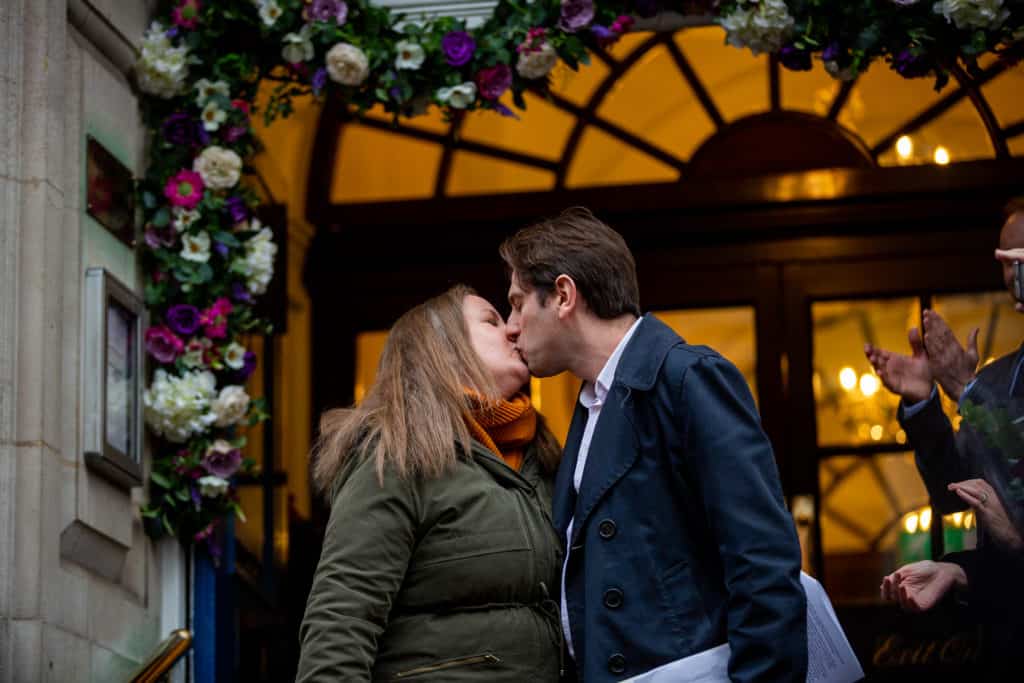 On March 21, the country came to a standstill with everything shut, including register offices for everything apart from registering deaths. All civil partnerships and marriages booked from then on and for during the lockdown were immediately cancelled.

In one aspect, at least, our current times have a precedent. Between 1209 and 1213, England suffered under the Interdict. King John’s argument with Pope Innocent III led to his and the country’s excommunication with no church services – including marriage  – being celebrated.

This was of course A Bad Thing as Sellars and Yeatman explained in their memorable history but probably had no real effect on the couples concerned. I suspect most simply moved in with their beloved without benefit of clergy and lived and were accepted as a couple. If one died, they either had nothing to leave or it went to the nearest male heir anyway.

Eight centuries later and matters are very different, thankfully. The overwhelming majority of couples live together before formalising their relationship; marriage is now open to same-sex couples and can be celebrated as a religious or civil ceremony; civil partnerships, a separate but equivalent legal relationship are open to both same-sex and – since December 31 – mixed-sex couples.

Crucially by entering into a legal relationship – whether mixed or same-sex, civil partnership or marriage – couples automatically qualify to receive a range of benefits, many of which don’t become apparent unless the relationship ends either through death or dissolution.

These benefits include the right to bereavement support payments, inheritance tax relief, capital gains tax relief, the automatic right to be next of kin, the ability to inherit your partner’s pension, and the right to death in duty benefits – (depending on the provider). In three years of working with the Equal Civil Partnerships campaign, it never ceases to amaze that so many people think that there is such a thing as a common-law marriage which will offer all these benefits.

There isn’t. And if you haven’t made a will, things will be even worse – whoever is legally next-of-kin will inherit everything.

It seems particularly hard that at a time of a pandemic where there is an increased risk of mortality that couples are denied the opportunity to ensure their partner and children won’t suffer financially if the worst were to happen.

As a campaign group, we have been inundated with stories and worries from people desperate to safeguard their future. People like Jim and Lily (names have been changed) who were due to register their civil partnership two days after lockdown came into force.

Lily is a GP and Jim a police-officer. They have two young children. Both are keyworkers, coming into contact with the public and in sometimes unsafe conditions. They have worked out that if one of them were to die, the other would have to sell the family home to cover their inheritance tax. And of course there would be no additional financial help for the survivor in the form of bereavement support payments.

I don’t want to claim that these problems are exclusive to mixed-sex couples wanting a civil partnership. All couples who had a civil partnership or marriage from March 21 are now facing an uncertain future. They are facing the loss and disappointment of having to cancel their happy day, which might have been planned for years but as well as that sorrow they also have the worry of an unprotected future.

Even when register offices re-open there will be a huge backlog, so aligning a date with a venue might take some time.

Of course I do feel a special sadness for mixed-sex civil partnerships – and not entirely because I have been the campaign manager for Equal Civil Partnerships for around three years. I do hear all the personal and moving stories – we have a very active vibrant supportive community which shares in each others’ joys and sorrows.

I’m also very aware that the choice of civil partnership was made carefully and many of our couples have been waiting since Rebecca Steinfeld and Charles Keidan began the campaign five years ago to be able to register their relationship. Given that mixed-sex civil partnerships have only been able to take place in England and Wales since the very end of 2019, bookings which have been cancelled now were made as soon as they were legally able to be.

Couples were trying to protect themselves in the legal relationship that they felt best expressed their own views and that has now been temporarily taken away.

So what realistically can be done? I do think that it will be a desperate pity to hear of any couple – same or mixed-sex who had their marriage or CP cancelled and who had suffered financial hardship as a result. I do think that particularly in the case of key-workers and especially those in healthcare, we cannot offer just applause and congratulations but expect them to risk their lives and to keep the country going while leaving them worried about exposing their partner to an uncertain financial future.

New York state has solved the dilemma, allowing marriage registrations over zoom.Colorado and Ohio also permit it, with United Arab Emirates allowing wedding online. There obviously need to be safeguards but couples who have had their marriages and civil partnerships cancelled for lockdown have already gone through giving notice and having had checks that they are both able to enter the relationship and do so willingly.

At Equal Civil Partnerships, we have started a petition on change.org asking for digital registration of marriages and civil partnerships using video technology. Nearly 1,000 have signed in the first couple of days. We think it’s vitally important that at a time of crisis, we do as much as possible to minimise other worries.

Love conquers all except poverty and toothache (Mae West). We can’t do much about toothache but we’re doing our best to prevent poverty!

Anni has worked across commercial, political and not for profit sectors in her 25 years as a public relations consultant. Her client list has included such diverse organisations as a radiator manufacturer, local council, science start-ups and even a synchronised swimming team.

Most recently she has been focused on the campaigning sector. As Campaign Manager for the Equal Civil Partnerships Campaign she is part of the team who succeeded in introducing mixed-sex civil partnerships in England and Wales at the end of 2019.