Looking back at 1997 – maybe what followed was inevitable 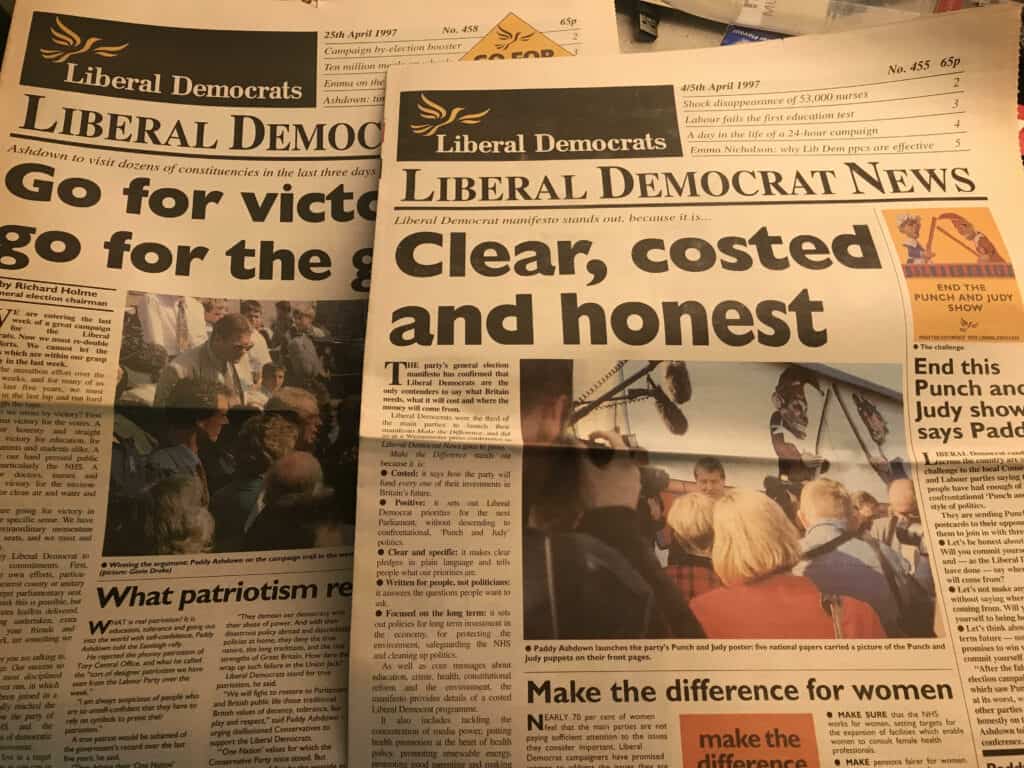 It is a little terrifying to think that thee general election of 1997, which brought with it such a sea change in our politics, was now 25 years ago this week.

I remember it as much for the extraordinary turn in fortunes for the Lib Dems, more than doubling the size of their parliamentary party to 46 seats in one leap, as I do for bringing the Blair-Brown show to power.

I was editor of Lib Dem News in those days, the party’s weekly paper, and I had spent much of the campaign travelling around the west country and other places, like Evan Harris in Oxford West & Abingdon, Brian Cotter in Weston-super Mare, Stephen Williams in Bristol West and Mark Oaten in Winchester (I particularly remember meeting his beautiful wife Belinda in the high street).

It was the perfect example of the so-called ‘dual approach’ at work: the Lib Dems were winning places where they had previously won local government influence. “Heading east from Penzance towards the capital – a journey of more than 300 miles,,” wrote a Times columnist in 1993, “drivers spend all but the half-hour traverse of Avon motoring through counties that are dominated or controlled by the Liberak Democrats,”

It certainly felt like that as I drove through huge fields with huge blue posters, but Lib Dem gold or yellow posters in profusion on so many houses.

It was at the party at the Pizza on the Park on election night, that the campaign chair Richard Holme told me, as Tom Brake won his seat in Caterham – which had long been a part of Lib Dem Sutton – that he had never heard of it before. We had become so used to never quite managing to win at a general elections – it was amazing to find ourselves suddenly popular.

I had been expecting a breakthrough like this since I had joined the Liberal Party in 1979 – I had even made a bet with my grandparents that we would win 50 seats “next time”. But 1983 came and went, and my grandparents died. In 1997, I finally felt some measure of justification.

The campaign had been characterised partly by a tacit alliance between Tony Blair and Paddy Ashdown. That night, Ashdown was given a police escort to London after his own count in Yeovil. He believed he was driving up to London to take power.

I believed in those days that this was a disastrous idea. Now, I’m not so sure because – with the benefit of hindsight – it seems to me that so much of New Labour’s rule for the next 13 years was technocratic and flawed. What a difference the Lib Dems might have made if John Prescott had been faced down by Blair when he complained and persuaded him to dump his promise to Ashdown…

We could perhaps have prevented the Iraq war, and maybe insisted on a fair voting system for Westminster, but I’m far from sure that my own party would have had the self-confidence to reject Labour-style technocratic centralisation using numbers – a horrible boulderisation of the enlightened approach by alternative economics thinktanks like – like the New Economics Foundation – to spread skills downwards and to measure everything.

“But what else can we do?” Lord Falconer said to me in 2001 when I told him I was writing about too many numbers at the heart of government. Could we have predicted the growth and damage of tickbox – or that it would undermine the trust of anyone using services, or in politicians that saw the world in terms of a common good that over-rode individual rights?

Could we have, back then, seen the future enough to know what disaffection it would bring along with it, so that Blair’s so-called ‘modernisation’ agenda now looks like a terrifyingly inhuman cul-de-sac?

So it maybe that we were stuck with the history we have in fact been living through. It is just that it could and should have been different.

It is hard to recreate the sense of victory of the young over the old and worn out that the 1997 election seemed to mean, back then. “Did you stay up for Portillo?” was the main question we asked each other – which was a question about whether we had seen the shock defeat of the next Conservative leader, Michael Portillo by a young Labour type called Stephen Twigg.

Well, I did, but I was back home by then, trying to work out what it would all mean now that so many of my thinktank friends were all involved in inquiries which were to take us in and out of No 10 for the next few years.

So we didn’t achieve the enormous changes we had set ourselves to do, but we came pretty close…