Is there a way back for Labour? 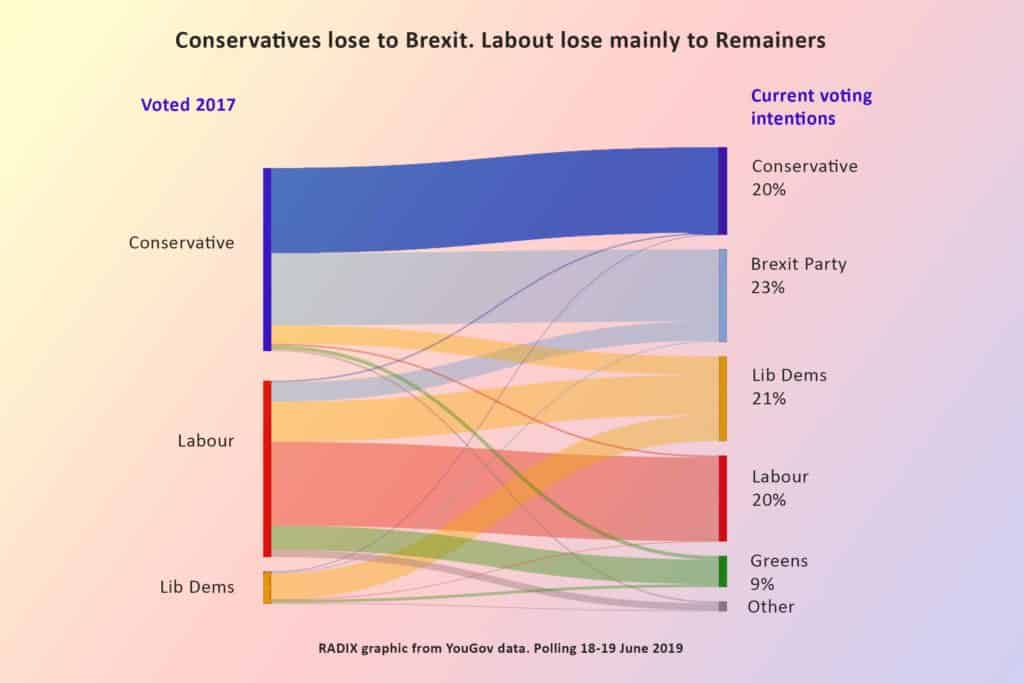 “Given the success of the Brexit Party, the likelihood is that the Tories might feel compelled to move to try to occupy some of that space. They may choose to elect a no-deal leader and pursue the mantra that, whatever happens, the UK will exit the EU by October 31…

“…As for Labour, the most likely outcome is prolonged infighting…For Labour, the straddling of two horses has turned out to be nothing short of a disaster from which it will be hard to recover.”

In the current political climate, if there is one thing that is unexpected, it’s that any kind of prediction might actually come to pass.

Yet current polling tends to confirm the situation.

As tech graphic shows, Labour is haemorrhaging votes to the Lib Dems and the Greens. It has also lost votes to the Brexit Party – though in much smaller numbers.

Superficially, the answer to this seems simple – Labour should become a second referendum/remain party. Maybe.

What we don’t know (though there are no doubt people who do) is how all this breaks down by constituency – important in a first past the post system.

We also don’t know the feelings of that majority of Labour voters who have stuck with the party and its current ambiguous stance. Were the party to shift positions, what would they do?

Finally, we are talking here about voting intentions as expressed to a pollster about a theoretical election. Do they really translate to what might happen months from now?

The idea that Labour should shift to Remain and win back the voters that they have lost to the Lib Dems and Greens is superficially appealing. The reality is likely much more complicated and may be unknowable.

But here’s a thought.

Maybe Labour should be guided by what it believes is best for the country and then work to carry people with it rather than be guided by vote counting and inevitably inaccurate polling.

But that may be far too radical an idea for the current political climate.