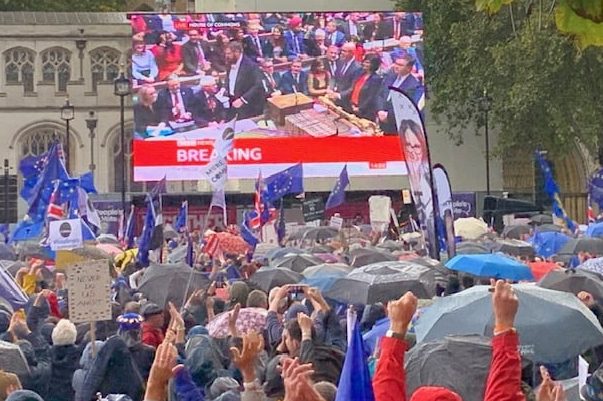 Does anyone out there remember Charter 88? A campaign of the largely liberal left, formed in the dog-days of Thatcherism, it sought a fundamental and long-term reform of the UK’s unwritten constitution.

Its coalition arguably fractured during the constitutional reforms of the New Labour government, when the drive for deeper change lost energy after the creation of the Scottish Parliament, the National Assembly for Wales, the Northern Ireland Legislative Assembly and the multi-lateral governance of the Good Friday Agreement, the curtailing of the rights and numbers of hereditary peers, the passage of the Human Rights Act and Freedom of Information legislation, and the creation of the Supreme Court.

Charter 88 was an elite campaign, with little of the popular mobilisation of the now-defunct People’s Vote movement. There were no marches in their hundreds of thousands for the Charter. But following a general election which has elected a government pledged to radical constitutional change, maybe we need a new People’s Charter campaign for a written constitution and a proper process of addressing constitutional issues.

Call it Charter ’20. Had the People’s Vote campaign not been collapsed from within, it would have been well-placed to provide the engine for this movement.

The evidence of the last twenty years of constitutional reforms has been a history of adhocracy. I can still remember, after the Scottish independence referendum of 2014, how future reforms were cobbled together in support of the panicked ‘Vow’ issued after an opinion poll showed that the independence movement might win.

As a minister in a Labour government in Wales, I watched as Labour colleagues in Westminster – sitting in opposition – signed up to constitutional reforms for Scotland without reference to the one Labour government in office. In late November 2014, I texted a Labour front-bencher to ask ‘are we really giving the Scots full control over income tax?’. Back came the reply ‘Yes. What choice have we got?’

A former UK Labour minister responded: ‘Sounds like it. End of Union’. Meanwhile a former Number 10 insider tried to reassure me that keeping National Insurance as a UK-wide levy meant we were keeping a commitment to the pooling of risk and redistribution.

Of course, a case for devolving income tax could be made. However, in 2014, it was being offered not as part of a rational and considered examination of tax, benefit and constitutional options across the UK, but in an outbreak of Unionist panic. The 2015 general election results showed how well that went for Labour in Scotland.

Such crises in the UK state provoke constitutional reflection. Brexit has provided others. In September, the minority Conservative government was on the defensive. With its reversal of the Conservative prorogation of Parliament, the Supreme Court demonstrated that it truly was a constitutional court . But now, having handed Johnson the election he wanted, the Labour and Liberal Democrat leadership have also handed him the tools to roll back the developing judicially-enforced constitution.

The December Queen’s Speech was cautious on constitutional arrangements. It set out plans to abolish the Fixed Term Parliaments Act and introduce identity checks for voting, and for a consultation on making electoral arrangements fit for the digital age. It also confirmed that a Constitution, Democracy and Rights Commission would be created, though the detail of this is for another day.

But as the Human Rights lawyer Adam Wagner has said, the think-tank Policy Exchange has been developing proposals for a radical constitutional re-ordering. These include re-branding the Supreme Court as an Upper Court of Appeal, essentially nullifying its role as a constitutional court, strengthening ministerial oversight of judicial appointments and limiting judicial review,  the re-establishment of Parliamentary sovereignty but with the executive’s powers reinforced, limits on the Human Rights Act and on the application of the European Convention on Human Rights.

This is an activist infrastructure-driven and clientelism-based Unionism designed to undermine and minimise the role of the devolved governments, some of which has already been put into practice and effectively dilute the already inadequate inter-governmental arrangements, while at the same time limiting central government’s delivery roles in England, politicising public appointments, and plans – not all of them controversial – to reform Whitehall radically, hinted at in Dominic Cummings’ recent blogpost.

Policy Exchange authors have been keen to assert their role in the writing of the Conservative manifesto.

There is a clear agenda here. To adapt Tom Nairn, this is Ukania Resurgent. Policy Exchange wants members of the Constitution, Democracy and Human Rights commission to be ‘united by a shared appreciation of the UK’s traditional constitution’. The UK in its current form has not yet completed a century since the creation of the Irish Free State in 1922, so it is not clear what the ‘traditional constitution’ actually means.

This is scarcely a Conservative agenda, as David Allen Green has pointed out. It is an agenda based on the notion of the will of the people. We can expect it to be implemented ruthlessly, just as the majoritarian vote in the referendum was used ruthlessly to remove a variety of citizenship rights from UK citizens, and as ruthlessly as dissident long-standing Conservatives were thrown overboard for their summer rebellion.

Those at the helm in government do not respect conventions or norms. We are well-past the age of the Nolan consensus. Cummings – and Gove, for he will be central – honed their experience in the uses of state power at Education.

Their ruthlessness may bring its own challenges. But it will require a determined and organised opposition, with effective campaigning, to limit the destruction it plans. The campaign needs organising. It needs an agenda. It needs troops. And it needs allies.

An organised popular campaign for a written constitution could offer space for the politically homeless. It could also attract unlikely friends. It could gain the support of the devolved governments in Scotland and Wales. There are already proposals on the table from the cross-party Constitutional Reform Group.

Sometime in the late1980s I was at a meeting where the late Liberal peer Richard Holme reported on an early meeting of the Charter 88 steering committee that he had attended. The novelist Salman Rushdie had offered to write the preamble to a new British constitution.