How we can start untickboxing the NHS 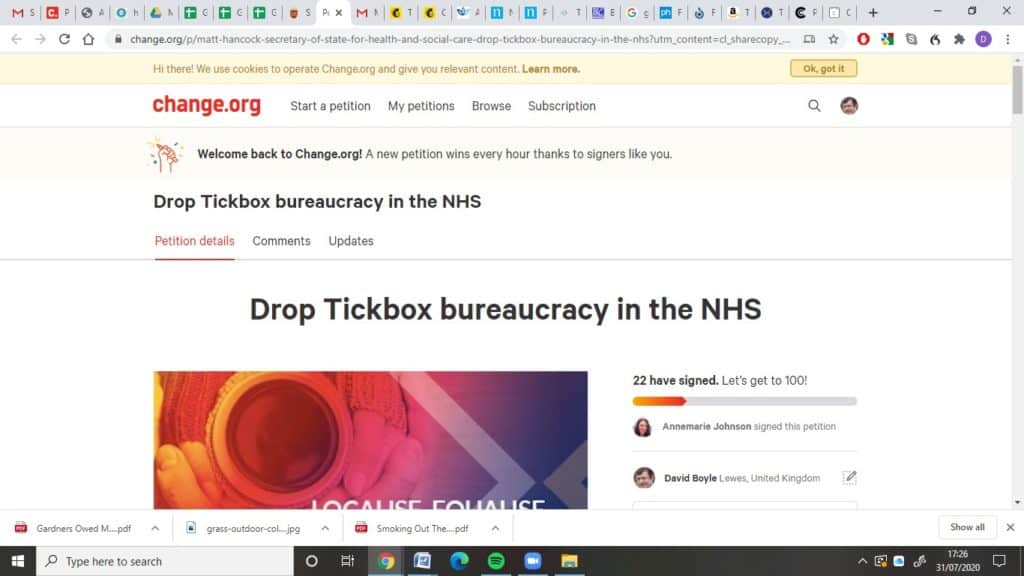 It is a strange divide in society. Some people furrowed their brows when I told them I was publishing a book called Tickbox, and really seemed to struggle to understand what I was on about – while some people grasped it immediately. Among those who got it, I couldn’t help noticing that many of them worked in the NHS.

It maybe that the NHS is not the most boneheaded user of tickboxes but – as a huge over-centralised operation, managing people looking after people’s very individual needs, somehow the gap between appearance and reality (which is for me the heart of tickbox) – the NHS has seemed to involve more tickbox-inspired sclerosis than most.

Yet, what did they do when the NHS was absolutely the front line? They rolled it back, the whole amalgam of online tickboxes, KPIs, targets and centralised controls that NHS managers rely on to monitor performance.

“Decisions that used to take months or even years because of endless, pointless form-filling and meetings are now made in less time than it takes to boil a kettle.” This is the new NHS under COVID-19 according to Dr Max Pemberton. One doctor we know was told by managers that sudden freedom was because NHS staff are “adults” and can be trusted to make the right decisions on the spot.

And of course that was right. They were adults yet they still are as the whole tickbox thing wafts back across the NHS. That is why we started our Radix petition to stop it in its tracks.

And what their managers want is often to make the best impact on the company hierarchy. Which in the NHS means saving money – or appearing to. Then the argument shifts, almost imperceptibly, away from ‘Is this the best thing for this patient?’ – to ‘Are we meeting our KPIs?’

It provides a fake, simplified and mechanistic view of what is undoubtedly a complex system – but complex in a different way. Anyone who thinks differently looks as if they are missing the point, but it is actually the system that misses the point.

My Tickbox book argued that this is part of what might be described as the simplification – not to say vulgarisation – of the official mind. And it is already having serious consequences. We have already witnessed during the current crisis how inaccurate the figures will be for Covid-19 deaths or tests or people affected – and how officials intervene in the definitions (for example on safe protective equipment) the whole time.

I am also hoping the NHS increasingly understands that tickboxing may simply achieve the opposite of what was intended. It can be a real hindrance, not the great time saver it purports to be. Mere tickboxing enables a lack of accountability.

All the systemic failures enabled by tickbox – from Mid Staffs Hospital onwards – have to be measured against the extreme pressure on services brought about by the austerity policies of successive governments, which is why NHS managers are trying to tickbox compassion into the mix, fearful perhaps that the real thing is unaffordable.

That is what happens in large centralised organisations when tickbox takes control.

Part of the costs fall directly on NHS staff. “The Berkeley University psychologist Christina Maslach defined ‘burn-out’ as a combination of three feelings: ‘emotional exhaustion, depersonalisation (a cynical, instrumental attitude toward others), and a sense of personal ineffectiveness’, wrote Atul Gawande, the doctor and author of The Checklist Manifesto. These were his conclusions:

“Many fear that the advance of technology will replace us all with robots. Yet in fields like healthcare, the more imminent prospect is that it will make us all behave like robots. And the people we serve need something more than either robots or robot-like people can provide. They need human enterprises that can adapt to change.”

I am quite hopeful here because of Health Secretary Matt Hancock’s campaign against bureaucracy. He can see ow much it gets in the way. There are some self-help ideas we might encourage as a stopgap in the NHS. We could, for example, learn from the Dutch health service and their schrapsessies.

That is the name the new movement in the healthcare sector in the Netherlands has given to the ‘scrap sessions’ they hold at work to identify regulations, targets, tickbox rules it would be possible to get rid of completely. The idea emerged in 2018 from the Dutch thinktank (Ont) Regel de Zorg, but the movement now has a head of steam behind it, and the backing of ministers.

It is high time we spread it more enthusiastically over here. Hence our petition to demand the government to permanently remove their tickbox regulations on the NHS, partly to thank staff, partly to recognise their adulthood and partly to save money – which should be reinvested in the frontline.

We hope in the end that covid-19 could mark the moment we stop infantalising NHS staff, and also the moment we lift the threat of tickbox over all public service staff.

Because, decentralising the management of the NHS is the key to its survival and the most urgent element here is to stop the centre from their disastrous habit of micromanagement. So please sign the petition and pass it on if you feel as strongly as we do about this.

TAKE THE FIRST STEP TO STOP NHS CENTRALISATION BY SIGNING OUR PETITION!