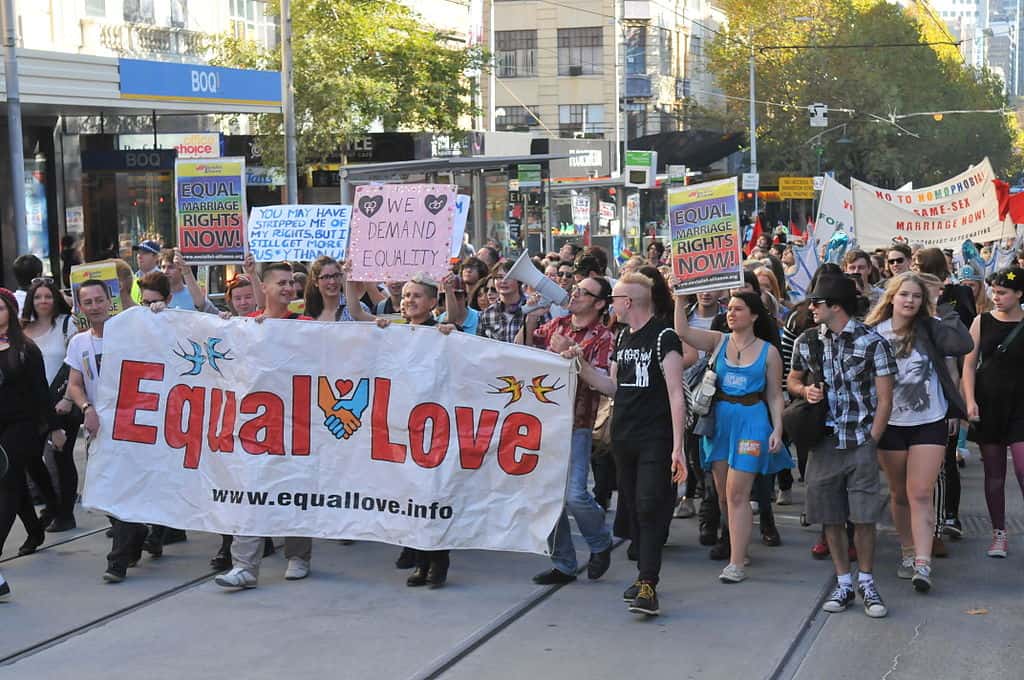 The ‘culture wars’ are a creation of Left and Right, imposed on us by activists, journalists and government agencies as their disconnect from civil society widens – and ‘civil society’ refers to families, communities, voluntary associations, small businesses, clubs, mutuals and faith groups, in the civil or non-state part of society.

Unable to generate grassroots movements to achieve their goals, Left and Right focus almost entirely on government, demanding that government says yes or no to questions that were previously settled or mediated in civil society.

They spend most of their time shouting for or against the distant actions of governments and public figures, when in truth the big things that affect our lives happen much closer to home – stress in daily life, crappy jobs, the frustration of dealing with Centrelink or Telstra, confusion about the role of men in society, and the epidemic of loneliness. The ‘culture wars’ ignore most of this. For most of us, the ‘culture wars’ are a big distraction from fixing the important things.

We don’t want Left or Right to ‘win’ the culture wars, we want individuals, institutions, journalists and governments to shift their focus to civil society.

But we know that the parties and activists of Left and Right are not going to do this. They will continue to demand that governments yield to every cultural offensive and counter-offensive.

They do this because civil society is invisible to them, and irrelevant to their ideological quests. They see only the state and its instrumentalities. Families, leadership from elders, moral formation in communities and self-help processes are invisible to them.

Aboriginal disadvantage, for instance, will not be reduced by either government programmes or by protests or by symbolic gestures – we have overwhelming evidence now that none of these things make a scrap of difference to indigenous disadvantage. But instead of addressing disadvantage through indigenous civil society, Left and Right fight over ‘race’. Arguments for and against race-based phenomena go backwards and forwards, ad infinitum. “Poverty is caused by race. No, it isn’t.” “Domestic violence is made worse by race. No, it isn’t.” On and on it goes. It is never resolved, and it fixes nothing.

We say something quite different. Transformations in the lives of indigenous people happen in nurturing families with supportive social networks and peers, conscientious teachers, meaningful work, and with leaders and elders who can negotiate the two worlds of traditional culture and liquid modernity.

We don’t want Right or Left to ‘win’ the war over race. It is a waste of time and resources. We want Left and Right to get out of the way so that indigenous disadvantage and demoralisation can be alleviated in civil society. This requires leadership – strong leadership – to get them out of the way, so that their politicking can give way to the building of relationships and trust.

We don’t want Right or Left to ‘win’ the war over gender, sexuality and family. Family formation and sexual identity are being influenced by a vast array of technological, economic and cultural forces, in a context of hyper-individualism exacerbated by social media. The only sensible way out of the social wreckage that has resulted is through a renewed emphasis on the formation of stable, cross-generational familial relations for the care of children and the old.

This can only happen in civil society. It can’t happen in the abstract. Demands from the Right that family relationships take only one structural form are just as inappropriate as demands from the Left that gender fluidity be universally accepted. Neither are going to happen.

The same-sex plebiscite was a disastrous way of handling these issues, a testament to Tony Abbott’s almost complete lack of political skills. There could only be one ‘winner’ from a plebiscite, and it was incapable of producing an inclusive outcome. A better response, more in keeping with the sensible centre, would have seen an amendment to the Marriage Act to recognise two types of union: ‘secular marriage’ between any two consenting adults, and ‘religious marriage’ between a man and a woman, sanctified in a religious context.

We oppose ‘winner-take-all’ politics. We support inclusion and the common good.

How do we end the culture wars? It is increasingly clear that Left and Right are not going to voluntarily cease hostilities, any more than capital and labour were ever going to voluntarily suspend their economic war. In the end, the culture wars will cease when the 80% of us in the sensible centre of Australian life are able to redirect the public conversation to our agenda and away from theirs, depriving the zealots of both oxygen and an audience.

This post first appeared in the newsletter of the Sensible Centre...