Does the West wish to offer up Russia to the Chinese? 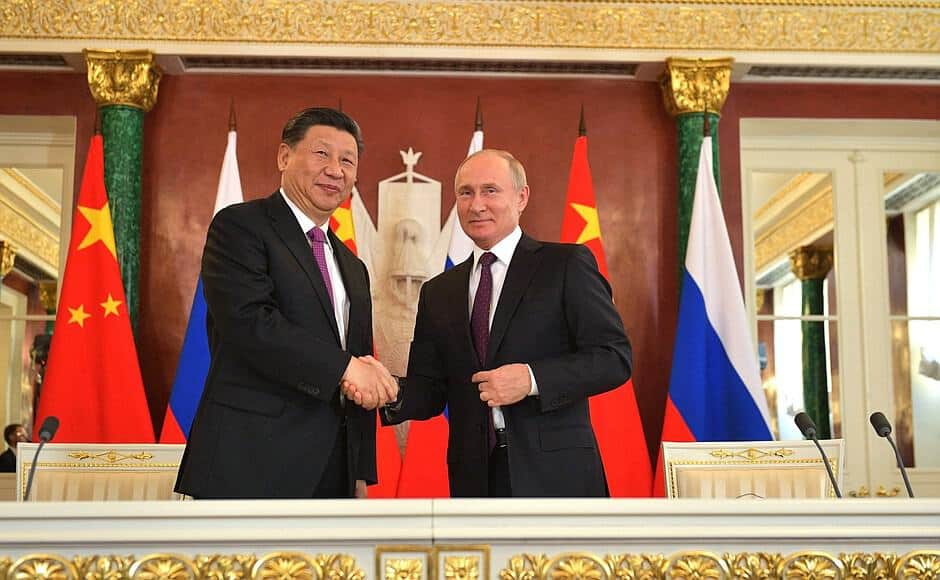 On June 6, celebrating the 75th anniversary of their landing in Normandy, the Great Western Allied Powers had invited Germany to the festivities. But no invitation had been sent to Moscow.

Yet it was the Russian army that destroyed 80 per cent of Hitler’s divisions during the Second World War (with the support of Western equipment and intelligence).

Vladimir Putin did not take offense at this diplomatic snub. He had better things to do that day – he received the Chinese president in the Kremlin.

Xi praised the Russian president as a personal friend and praised the strength of the China-Russia strategic partnership, saying it had never been so close in contemporary history. The Russians have announced that they are choosing Huawei technology to equip their future 5-G networks.

Accused of dumping and espionage, the Chinese telecommunications giant has been blacklisted by a US government that wants to ban all US companies from doing business with it.

When Henry Kissinger was leading US diplomacy and negotiating both the opening of diplomatic relations with China and the slowing down of the nuclear arms race with Soviet Russia, he had developed his famous doctrine of the Washington-Beijing-Moscow triangle.

According to him, it was necessary for America, in its foreign policy, always to be politically closer to China and Russia than the two Asian powers between themselves.

This is no longer the case. By pursuing punitive policies towards these two nations (personal and commercial sanctions against Russia since 2014; prohibitive tariffs and technological boycott against China since the Spring of 2019), the United States has “succeeded” in throwing them into each others’ arms.

Fifty years ago, America intervened diplomatically with Russia to give up the use of tactical nuclear missiles in its border confrontation with China on the Ussuri River. Today, we see Russia sending ships from its Pacific fleet south to support China. As shown by a near miss incident on June 7, the Russian Navy is likely to provoke the US Seventh Fleet, whose mission is to prevent China from controlling the waters of the South China Sea (an area as large as the Mediterranean, that also skirts the Philippines, Brunei, Malaysia and Vietnam).

The Chinese fleet has begun timidly to show itself in the Mediterranean. But there is no shyness in the Russian fleet’s suddenly support of its Chinese ally in the Pacific.

China is a strategic rival for the United States. Russia is no longer; its economy is seven times smaller than the US economy. Russia nevertheless remains a great military power and with huge natural resources in Siberia.

The West would make a cardinal strategic error in pushing into the arms of the Chinese this nation which, since Peter the Great, is a part of European culture.

One cannot overstate the harm that American neo-conservative ideologues have done to Western interests. By sabotaging the intra-Ukrainian political agreements of 21 February 2014 (though it was sponsored by France, Germany and Poland), they provoked the Russian reaction in Crimea.

Was Putin right to intervene in the Donbass in the summer of 2014 to support anti-Kiev separatism? Certainly not. But this Kremlin sin does not justify the Russia’s ostracism by the West, who, in 2014, hounded Russia out of the G8.

Kissinger knew how to negotiate with the Russians and the Chinese while remaining firm on the disagreements he had with them. The neo-conservatives are Manichaeans, for whom everything is either black or white. Perched on their moralizing pins, they are unable to build a pragmatic dialogue.

The diplomatic boycott of Russia is a grave mistake for a West that needs Russia in the Pacific. We are reproducing the error of the Treaty of Rapallo, signed in April 1922 between the Germans and the Russians, which we boycotted diplomatically. Rathenau then obtained from Chicherin secret training camps in Russia for aviation and the armoured weapons of the Germans …

While continuing to help its NATO allies militarily (including the Baltics), it is imperative that Paris renew ties of friendship with Russia. One day, she needs to be brought back to a European family which she should never have left.